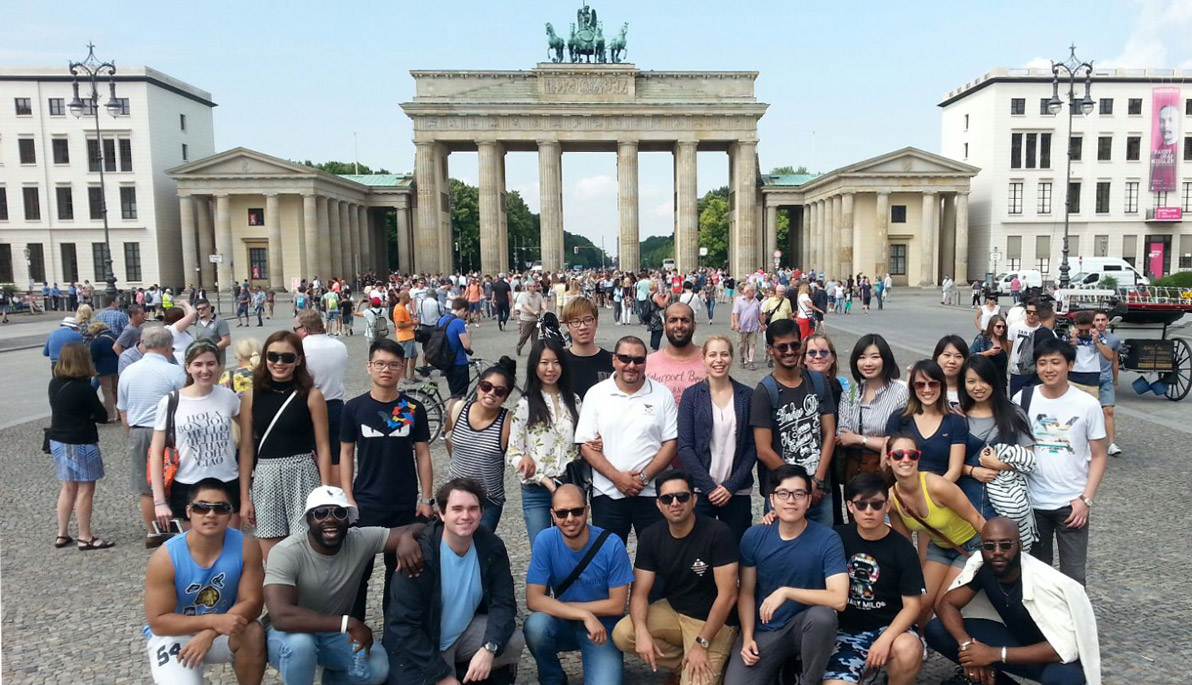 Seeing the traditional German architecture (timber-frame houses with pointed roofs), narrow streets, and locals made our first experience in Germany almost surreal. Yet, despite an eight-hour flight and six hour time difference, our group couldn’t wait to wander the small town of Soest (pronounced “zoust”) with one of our German professors, Marga Taylor, as our guide.

I was there as part of a summer study abroad experience open to all majors that was sponsored by the School of Management. Along with 24 students from four of NYIT’s global campuses, I spent two weeks with professors at German university Fachhochschule Südwestfalen taking classes on World War II history, German and European culture, the European economy, and cross-cultural and business communication. When not in class, we toured some of Germany’s largest companies and also went sightseeing in Cologne and Berlin.

Our first week was all about asking questions and exploring. Learning World War II history in Germany felt intense and significant. Both of our professors, Dina Dreisbach, Ph.D., and Marga Taylor, answered all of our questions without reservation. We discussed the refugee crisis and learned that Soest accepted thousands of refugees and that our German professors participate in a program which helps refugees adapt to their new home.

One memorable thing Professor Dreisbach told us was, “You can only accept the past if you talk to each other.” I understood this to mean that to create a better future, one must learn from the past through dialogue. This is something our German Parliament tour guide would echo later in the trip. The guide explained that Germany took the lessons of World War II very seriously and implemented many social programs in schools and government to prevent such atrocities from happening again. It was interesting how we learned of this in class and on our tour of the parliament.

When visiting companies, we went on tours and met with executives. For example, at Thyssen-Krupp, one of the world’s largest producers of steel, we witnessed molten steel being poured from one massive bucket into another one three-stories tall. I felt like I was in The Lord of the Rings.

By the second week, we were a very united group. While it wasn’t planned, the trip was made even better by how multicultural our NYIT student group was. There were students from the New York City, Long Island, China, and Abu Dhabi campuses. We were all so different and yet our differences were what brought us together in conversation. We learned so much from each other and each other’s culture—more than we would have if there were a class for it. It was a special opportunity to be able to speak candidly and learn while making new friends.

The last three days we traveled to Berlin and visited notable landmarks like the Bundestag (German Parliament), the East Side Gallery (Berlin Wall), and the Holocaust Memorial.

I will forever cherish those two weeks abroad. I gained much more than the three credits I put towards my degree; I came away with more communication tools and a better understanding of how to use them as I pursue my career in journalism. It advanced my knowledge of communication in business and I am more confident in dealing with our increasingly culturally diverse world.

And I also had a lot of fun.