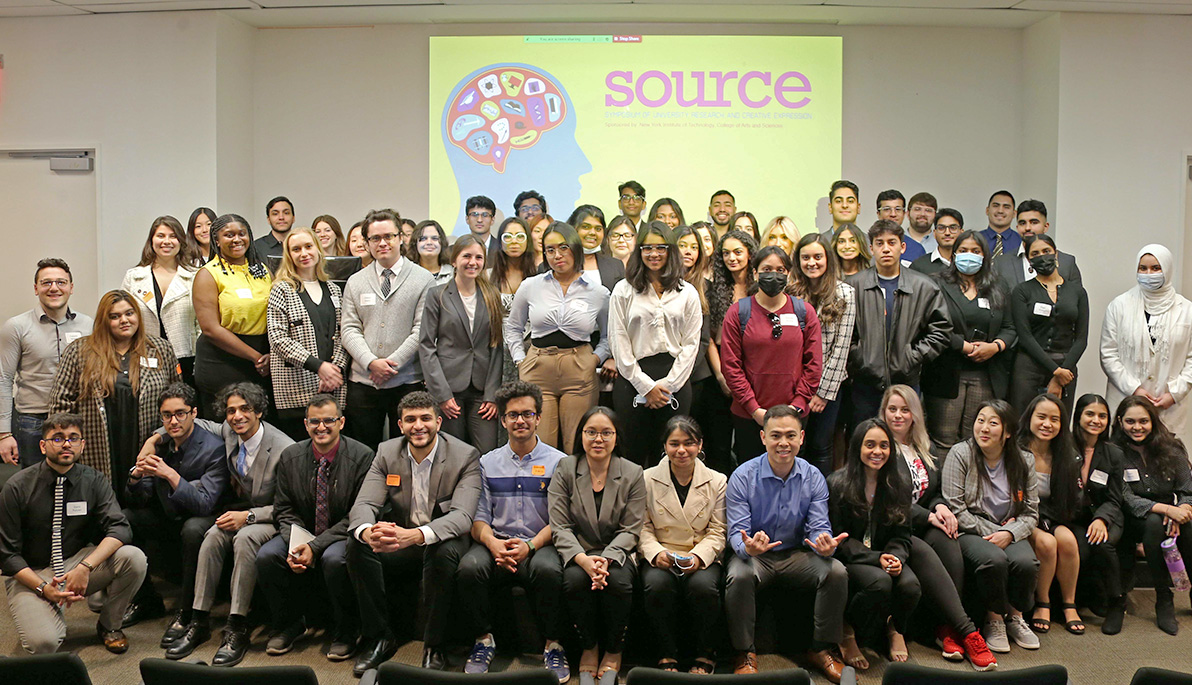 On April 29, students from the New York City and Long Island campuses gathered at the Symposium on University Research and Creative Expression, also known as SOURCE. Held on the New York City campus, this annual end-of-year event offers students a unique opportunity to present their scholarly work to peers in collaboration with their faculty mentors. The event was held in person for the first time in two years, with students from the Vancouver and Arkansas campuses attending via Zoom. SOURCE 2022 featured exhibits and oral presentations on subjects relevant to every New York Tech school and college. A record 96 abstracts were presented for consideration, and more than 150 students participated.

SOURCE organizer Roger Yu, Ph.D., professor of physics, kicked off the day’s event by welcoming students and thanking them for their dedication to academic research, followed by congratulatory remarks from President Hank Foley, Ph.D. “To be able to make and process new data—and then present your findings to your peers—is what makes SOURCE such a valuable student learning experience, said Foley. “Today, you are cultivating great career skills that span every discipline.”

Students showcased research on topics including bacteriophages, Alzheimer’s disease, and genotyping, as well as issues ranging from addiction, challenges faced by the LBGTQ+ community, abortion, and climate change in a variety of media, including film, graphic design, and infographics.

A new addition to SOURCE in 2022: student sketch comedy. Ishaan Singh, an electrical and computer engineering student, worked with faculty mentor, Assistant Professor of Physics Eve Armstrong, Ph.D., on his comedic presentation, “The Lockdown Comedy,” which recounted his experiences during the COVID-19 lockdown. “I did this to improve my social and communications skills and have a go at improv,” said Singh.

Biology major Alena Yukova also worked with Armstrong on two themes: preparing for medical school and coming to terms with her nationality—Yukova was born in Russia—in the current geopolitical climate.

College of Osteopathic Medicine (NYITCOM) student researchers Nolberto Jaramillo and Ermin Tale along with electrical and computer engineering major Robert Maksimowicz, presented their project Utility of a Semi-Autonomous Tissue Retraction Robot in Simulated Pacemaker Implantation Surgery, an in-depth analysis and examination on how to alleviate overburdened healthcare workers from having to do tissue retraction during pacemaker implantation surgery by instead using robotic technology to perform the retraction. With the assistance of Entrepreneurship and Technology Innovation Center (ETIC) Director Michael Nizich, Ph.D., and NYITCOM Professor Todd Cohen, M.D., the students utilized E.R.R.S.E.L.A. (ETIC Research Robot for Student Engagement and Learning Activities), to develop custom-designed tools and routines.

Constructed of metal and wood, a battery generated through a Raspberry Pi computer, and an electric motor allowing wireless control of the robot through custom pre-programmed routines, their semi-autonomous robotic retraction system successfully accomplished a set of retraction tasks with some limitations. In addition, the robot was able to move to the operating table, extend the retractor, and retract, even though the only autonomous action it could perform was maneuvering to the table. The students described their next objective in the development of the final prototype as providing it with the ability to move into place and retract without pre-programmed routines and ultimately test the system in an operating room with real surgeries.

In a keynote address, alumna Jacqueline Mason (B.S. ’92), vice president of enterprise technology services end user technology at Morgan Stanley, spoke to the student attendees about the opportunities she engaged in at New York Tech as an undergraduate computer science student and how the university prepared her for a successful 25-year career in the financial industry. She also spoke about the critical role mentors play and shared valuable lessons she learned from others.

“I thought the event was highly interesting. All the presentations and research projects were sophistically detailed,” notes Maxamillion Foley, a second-year architecture student who presented Plan Collage with classmates Carolina Flores-Iglesias, Jose Molina, Dilara Yesiltepe, and Edward Cahill, under the guidance of Adjunct Instructor Elijah Williams. The group created a mashup of various architectural plans to form a collage that, while abstract in nature, displayed the complementary elements of different approaches. “All of us [presenters] were able to grasp something during this event and expand our knowledge, even if it wasn’t related to our fields,” said Foley.

Yu summed up the event with a nod to the future: “This year, New York Tech students made a record-breaking achievement at SOURCE. Looking forward to its 20th anniversary next year, I can’t wait to see our students make it an even bigger success.”

View a slideshow of the day’s events.