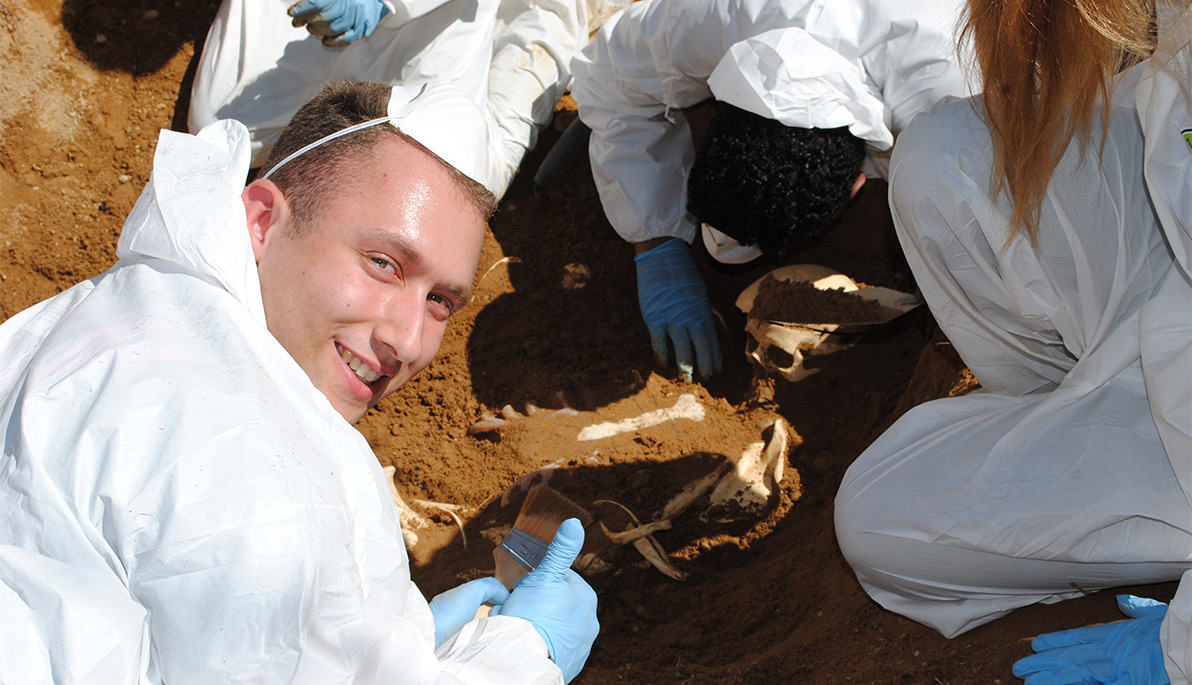 The Crime: A murder most foul
The Scene: Old Westbury Campus near Education Hall
The Investigators: NYIT Students

No, this isn’t the set up for an episode of CSI or Law & Order or even Poirot. It’s the scenario at the heart of Organized Crime, a course taught by Andrew Costello, assistant professor at NYIT College of Arts and Sciences. “I wanted to create a class that was more realistic to a true investigative experience,” said Costello, who is a former NYPD deputy inspector. His experiences gave him plenty of material to work with.

To set the stage, Costello drew on details from actual cases to come up with a murder case for the class. He also enlisted former NYPD colleagues to assist with the forensic aspects of the dig and to evaluate the students’ oral presentations. Foreman Phil Anderson and other members of the NYIT grounds crew planted the skeleton (literally—the body was buried in a field near Education Hall). Finally, Costello gave the case file to the students and let them have at it. Communication Arts students documented the events and students in the Detective Novels class were invited to observe the process.

“This class gave us an inside look at what being an investigator is all about,” said Alexa Galfano, a criminal justice major. “Instead of sitting at a desk and listening to a lecture, we were able to actually go to a dig sight and solve a mock murder case. I am not going to lie—being an investigator is hard, but in the end, the case was solved, and I would love to do it again.”

The course was unusual in other ways as well. Typically, forensics and criminal investigation are taught in separate classes, with little or no crossover. Costello has always found this approach to be ineffective. “Investigators and criminalists need to know aspects of each other’s jobs,” he said. Costello’s approach brought the two fields together, giving students an experience that more accurately represents what they will encounter in law enforcement.

Along with executing a forensics dig, the class also learned how to apply for a search warrant, conduct proper interrogations, and effectively work with other members of a forensics team. Biomedical research students, for example, were brought in to conduct DNA analysis. “Cross-over training allows for insight into each other’s job,” said Costello. And knowing what details to convey to other members of the team can make all the difference in an investigation. “If I request a technician to process a burglary and give no other instructions, the technician will look for biological evidence and dust for fingerprints near the broken windows,” explained Costello. “But if I also tell the technician that the owner said the drinking glass on the table is new and was not there when the owner left and may have been drunken by the burglar, then the technician has more details and direction in order to process evidence.”

“I recommend the class 100 percent,” said Angelica Rakowicz, a criminal justice major who hopes to pursue a career with the FBI. “I can use the forensics dig as an example at a job interview and say that I have experience within this field.”

Once they gathered all of the evidence, conducted all of the interrogations, and evaluated their findings, the students presented their conclusions to the class and Costello’s NYPD colleagues.

“I hope students learned the true difficulties of a real investigation and hopefully remember the forensic techniques and the value of testimonial evidence,” said Costello.