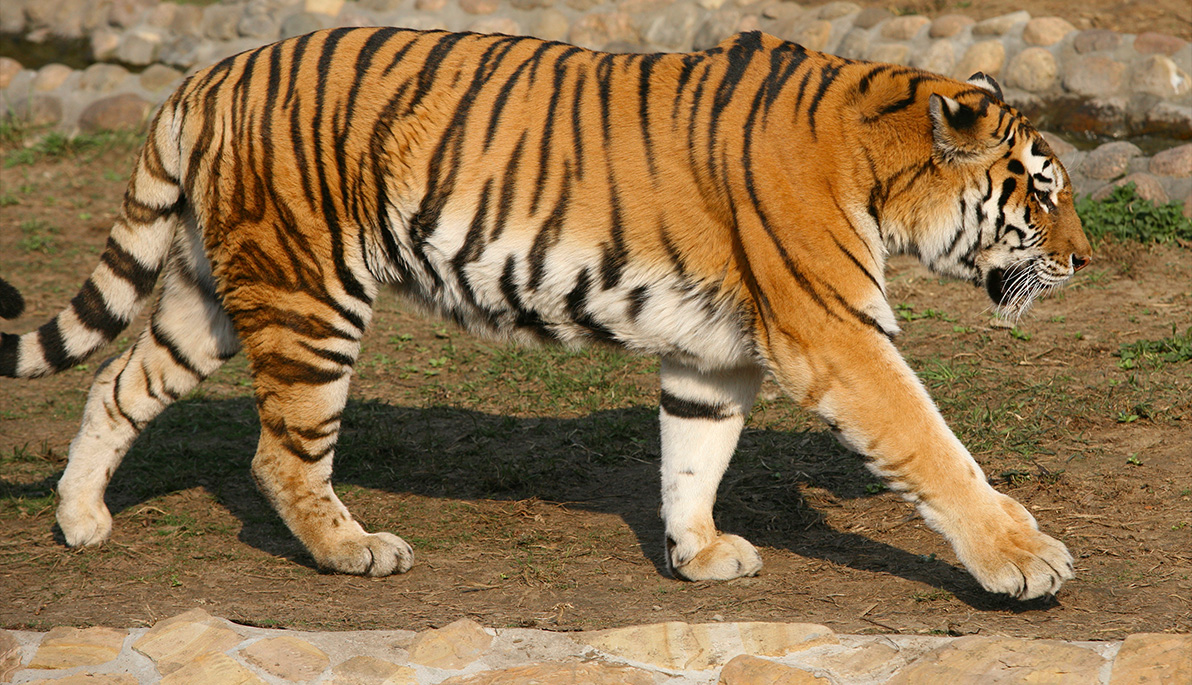 Why do tigers saunter but crocodiles lumber? According to an NYIT College of Osteopathic Medicine (NYITCOM) anatomy professor, the tiger can thank its finely tuned nervous system for its smooth walk.

All four-footed animals, also known as tetrapods, have small receptors in their muscles called Golgi tendon organs, which protect muscles from forces felt during locomotion (walking) and other physical activity. When muscle tension becomes dangerous, these receptors signal the nervous system to produce reflexes that release tension and prevent injury. Since the 1900s, neuroscientists understood that the peripheral nervous systems (outside the brain and spinal cord) of tetrapods differ greatly, but until now, they could not explain how these differences affect the way animals walk, run, or move.

In the January 27 issue of Journal of Experimental Biology, Michael Granatosky, Ph.D., assistant professor of anatomy at NYITCOM, suggests that mammals and birds, which diverged from early tetrapods later than amphibians and reptiles, adapted finely tuned Golgi tendon organs making them more nimble than reptiles and amphibians. Amphibians and reptiles have freeform Golgi tendons located further from the muscle-tendon junction, suggesting that they detect stress across the entire muscle. In contrast, birds and mammals have encapsulated Golgi tendon organs set directly at the muscle-tendon junction, signifying an ability to detect tension in precise muscle areas, which would allow animals to move with more control. 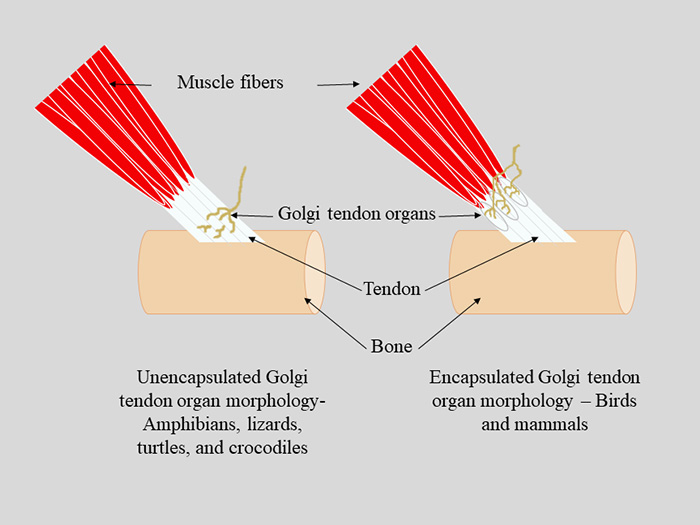 Diagram illustrates the structural differences in Golgi tendon organs in amphibians and reptiles vs. birds and mammals.

“These structural variations are well known, but no one has questioned what they actually mean for the animals,” says Granatosky. “We studied the largest collection of zoological locomotive data to date, which spanned 30 years and 55 species, and found that these variations directly affect how animals respond to the forces acting on their limbs.”

Granatosky’s post-doctorate mentor Callum Ross, Ph.D., professor of organismal biology and anatomy at the University of Chicago, began the research and included vast sets of data collected from zoos and research facilities in the U.S., Canada, and Germany. Granatosky, a biomechanics expert, wanted to understand how the animals distributed their body weight while in motion. In his research, he measured their steps with a three-dimensional scale called a force plate (see videos below). Reptile and amphibian strides were found to vary greatly with each step, but mammals and birds crossed the force plate with very consistent strides. The findings suggest that, while in motion, a predictable response to force provides a selective advantage that could conserve energy and allow birds and mammals to swiftly regain footing from a fall. Granatosky also believes that the less responsive nervous systems of reptiles and amphibians may have caused a need for protection, which led them to adapt stronger bones.

“Reptile and amphibian bones can sustain forces 10 times heavier than their weight, whereas bird and mammal bones can only sustain forces two and a half times their weight. It’s possible that birds and mammals adapted lighter, more energy-efficient bone structures in response to no longer needing heavy, protective frames that demanded a great deal of energy,” he says.

Granatosky received a university grant and will test this theory to determine whether Golgi tendon organs played an evolutionary role in bone density and energy usage. He is also collaborating with New York Tech engineering, architecture, and digital arts students to build robots that accurately simulate animal locomotion. The first robot will simulate the walking patterns of the blue-tongued skink, an Australian lizard that drags its belly and is commonly used as a model for early tetrapod locomotion. In addition, he is working to establish NYITCOM’s Comparative Animal Motion Laboratory (Twitter; Facebook), a state-of-the-art research facility that will be located in the W. Kenneth Riland Academic Health Center. The lab will provide a dedicated space for Granatosky and other Anatomy Department faculty including Julia Molnar, Ph.D., and Nathan Thompson, Ph.D., to study animal biomechanics.