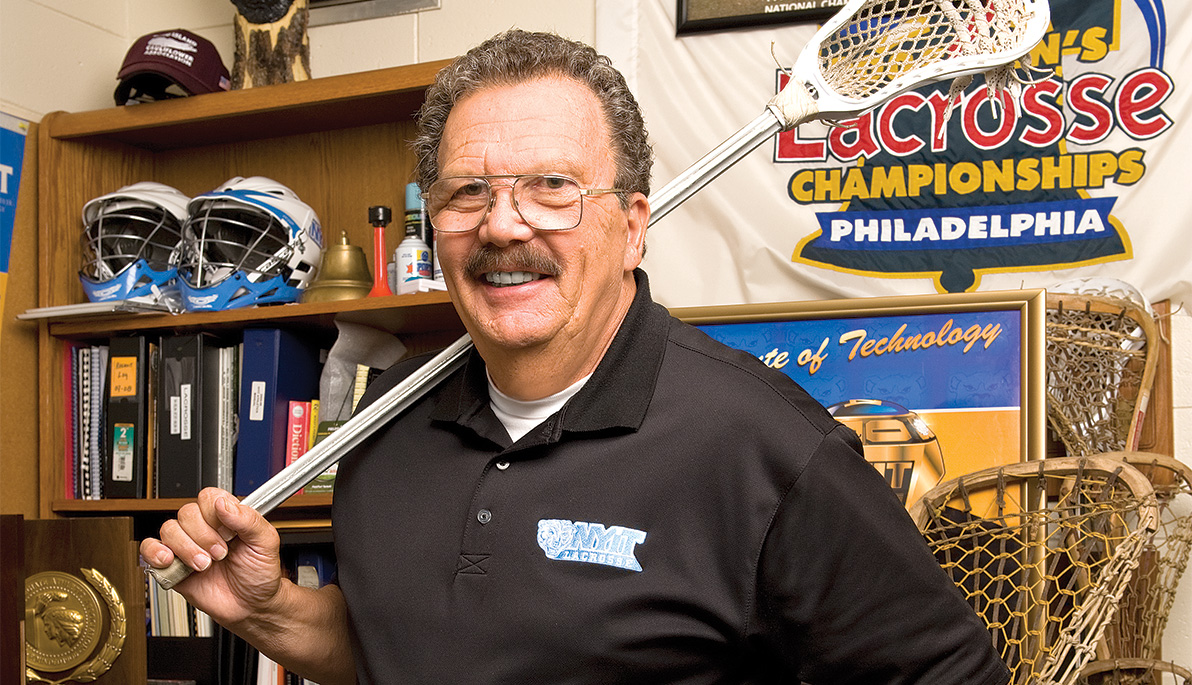 Jack Kaley, former head coach of the New York Tech men’s lacrosse team, passed away on August 19. He was 83.

Kaley, who retired as head coach in 2009, led the Bears to four NCAA Division II championships in 1997, 2003, 2005, and 2008. He set the team’s long-term success in motion in 1994, his second year as head coach, when the lacrosse team went undefeated in the regular season and made it to the NCAA II finals.

“That was a special team,” he said in an interview with NYIT Magazine in 2009. “They set the tempo and the bar for the other teams to follow.”

Kaley’s coaching style emphasized hard work, heart, and hustle. Players didn’t have to be the biggest or quickest, just the most determined. Kaley and his team’s successes raised New York Tech’s reputation in collegiate sports, as well as globally. European coaches used to reach out to him for advice. And many lacrosse fans cite the Bears’ overtime victory in 2005 as one of the greatest lacrosse games ever played.

Kaley’s career began in 1964 as a high school coach and ended as the German national team coach in 2014. In 2010, he was inducted into the National Lacrosse Hall of Fame.

Over his 50-year career, Kaley coached 87 U.S. Intercollegiate Lacrosse Association (USILA) all-Americans, compiled more than 500 wins, and led the Bears to five championships. At the time of his retirement, he held the record for the highest career winning percentage in NCAA Division I and II lacrosse and was the only coach to earn the USILA Coach of the Year four times.

According to an article in USA Lacrosse Magazine, “Kaley introduced several strategies still used today, including the backer-zone defense, swarming ground ball patterns and the Hugo (“Wherever he goes, Hugo!”) ride that identified mismatches after stoppages.”

Tributes to Kaley have been posted on social media from former players, colleagues, coaches, and friends.

“His pre-game speeches were a thing of pure inspiration,” noted former Athletic Director Clyde Doughty (M.P.S. ’98) in a Facebook post tribute to Kaley. “When he got rolling you could hear him through the entire facility firing up da Bears. He demanded excellence on and off the field.”

“The three best words to describe Jack are compassionate, considerate, and courageous,” said Bruce Casagrande in an interview with USA Lacrosse. (Casagrande served as Kaley’s assistant for nine seasons at New York Tech.) “It wasn’t until I started to work with Jack that I realized it’s so much more than X’s and O’s that make a great coach.”