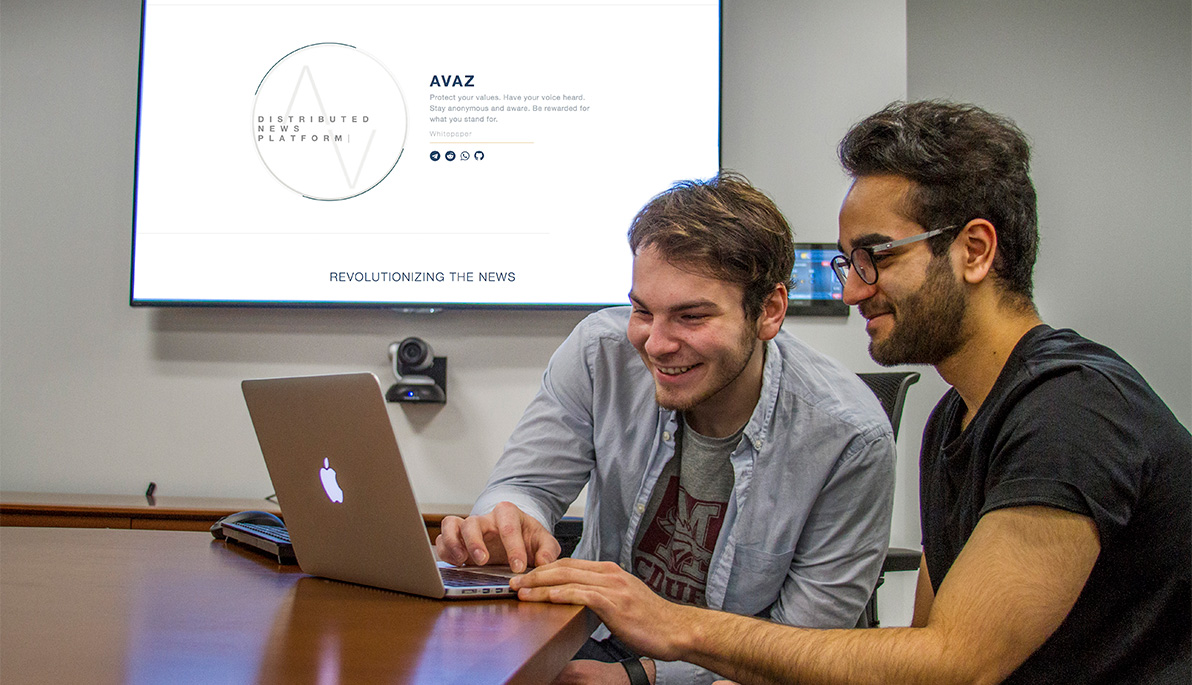 When Arshit Arora and Denisolt Shakhbulatov met during their freshman year at NYIT-Manhattan, they quickly realized how much they had in common. For example, they both wanted to be movie directors before considering careers in aerospace engineering or computer science. Now, as juniors majoring in computer science in NYIT School of Engineering and Computing Sciences, they are business partners preparing to launch a news platform based on blockchain and developers of a blockchain-based advertising app, which earned them prize money in two developer competitions. “When someone says ‘blockchain,’ everyone says, ‘transactions, money,’” said Shakhbulatov. “We said, ‘We need to build something that is going to stand out.’”

Arora and Shakhbulatov sat down with The Box to talk about their work on finding innovative uses for blockchain beyond finance.

Okay, the big question: what is blockchain?
Arshit Arora: It’s a distributed database. Say you have a room full of people, and one person says “2+2=5.” You cannot trust just that one person, but if the majority agrees on something, that’s called a consensus. In a distributed database, you cannot rely on what one computer says, but you rely on the majority of them because they all have the same information and they’re processing it at the same time. When the majority agrees upon the answer, it’s saved, and the computers move onto the next calculation. [The process is] anonymous, but you can see all of the transactions on the public ledger.

How did you get involved with blockchain?
Denisolt Shakhbulatov: One day last summer, Arshit told me about this blockchain thing, but I didn’t understand it. He kept telling me about it, and next thing I know, blockchain is a big thing. We had been working on an IoT [Internet of Things] project that ended up having too many financial and legal complications. Then Arshit suggested doing something with blockchain, and we decided to make a news platform.

Why did you decide to create a news platform?
Shakhbulatov: My whole family is in journalism. My father [in Russia] has told me of backlash he has faced for not writing pro-government stories and for not having a Russian name. We wondered how we could fix these problems.

Arora: My friend is a social activist in India, and she’s getting threats. I thought, ‘This is not fair. You should be able to speak your voice.’ We built an anonymous platform called Avaz, which means “voice” in Hindi. You don’t have to show your identity, but you can still say whatever you want. Because of blockchain, the records can be immutable. Even if the government decides to take down the platform, the data would still live forever.

How does Avaz work?
Shakhbulatov: Anyone can publish or edit articles anonymously and earn money from advertisements. People get paid in a token called AVX. A group of people can publish as one entity, purchase content, or give out tasks. These organizations pay the promised amount on time because of smart contracts.

What is a smart contract?
Arora: Let’s say you want to pay someone to complete a task. You can make a smart contract, and it will live on the blockchain. When the task is completed, the smart contract will deduct a certain amount from your wallet and send it to [the person who did the task].

Shakhbulatov: The smart contract requires the organization to have the promised amount in its account, and the contract cannot be altered after it has been created ... You can’t lie. That’s why a lot of people say that blockchain will work for elections. You can make sure that there is no manipulation because it’s done by a program that’s being spread through every single computer on the network. If you were to change it on one, that computer would just drop out of the blockchain.

Arora: There’s not enough computing power in the whole world to manipulate a blockchain because you would have to rewrite the whole history from a certain point.

Tell me about the competitions.
Arora: [NEO has] a group called City of Zion that we work with directly on building Avaz. It’s a little organization within NEO that promotes building applications on blockchain. We discovered they were having a competition in February 2018 and decided to participate. [Denisolt] came up with the idea of having an augmented reality app like Pokémon Go. You could just point your phone at a building, and it will show you advertisements and coupons. We incorporated that with blockchain so that users could get the coupons and earn money from the advertisers for taking coupons.

Shakhbulatov: The goal [of the competition] was to make something that no one else has made on blockchain. It took us around three days to build a web application, Android application, and blockchain [for our app]. The second competition was the NEO global competition, which was also about building an application on blockchain. They had over 500 developers and teams registered. They partnered up with Microsoft, so they had really big prizes. The first prize was $150,000. The deadline for the NEO competition was right after the City of Zion deadline, so we figured we might as well enter. We ended up winning the award of merit with a prize of $15,000. We were also one of 10 winners in the City of Zion competition and won $15,000 from that, too.

How has NYIT helped you in these endeavors?
Arora: I showed our augmented reality app to my database professor, and he gave me a lot of ideas.

Shakhbulatov: There’s been a lot of support from the engineering department. I don’t think I would ever be motivated if not for the opportunities I’ve gotten at NYIT. You always have a chance to prove yourself, show yourself, learn more, and it’s just all up to you.