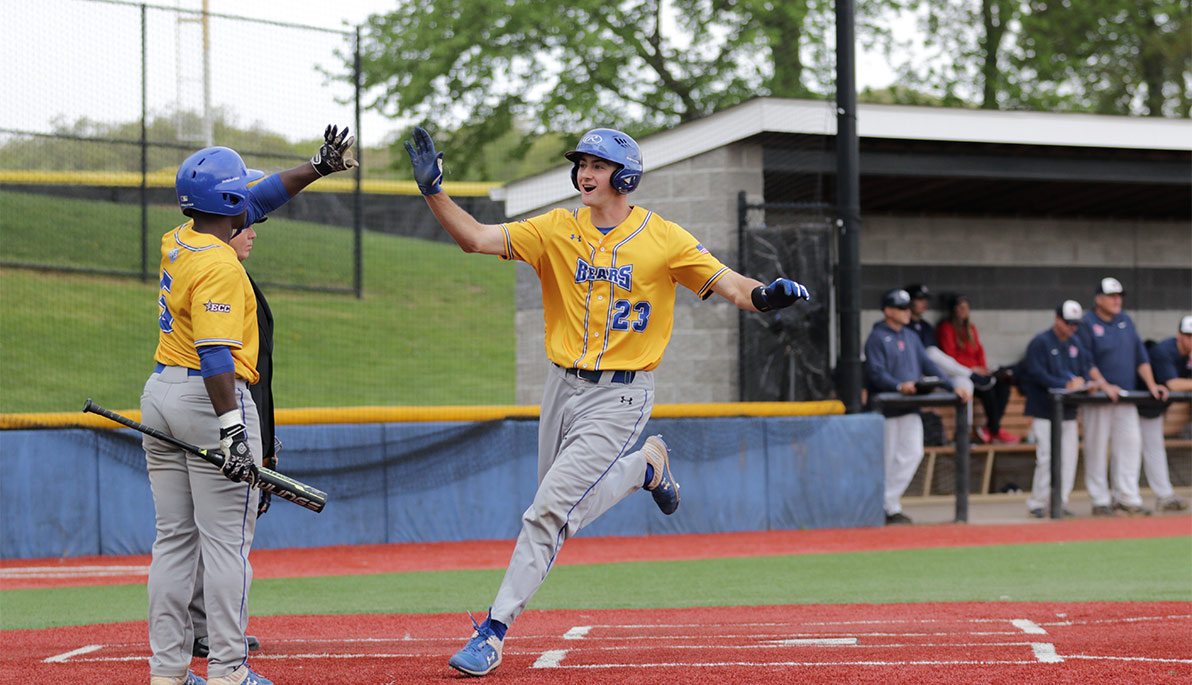 The NYIT baseball team officially is in the NCAA Tournament for the first time since 1983.

The Bears earned the No. 5 seed in the East Region and will face fourth-seeded Wilmington in an opening-round game on May 16 at Adelphi.

Top-seeded Adelphi will face No. 8 seed Franklin Pierce in the other matchup that day in Garden City.

NYIT baseball’s last NCAA Tournament appearance came 36 years ago while competing in Division I. The Bears were eliminated with consecutive losses to host Maine and Temple.

NYIT baseball players, coaches, and staff gathered in the Bears Den on May 12 to watch the team’s name be called during the selection show on NCAA.com.

The regional follows the same format as the recently completed East Coast Conference (ECC) tournament—four teams in a double-elimination event over three days.

No. 2 Southern New Hampshire University (SNHU) hosts the other East Regional, which also includes No. 3 LIU Post, No. 6 Felician, and No. 7 Assumption.

The winners of the Adelphi- and SNHU-hosted regionals meet in a best-of-three Super Regional May 24 and 25 for the right to represent the East in the Division II College World Series at the USA Baseball National Training Complex in Cary, N.C., beginning June 1.

“This is a great accomplishment for our baseball program,” Catalanotto said. “It’s a testament to how hard these guys have worked all season. They should be proud of themselves. We can’t wait to get started on Thursday.”

Wilmington (38-16) earned its second straight Central Atlantic Collegiate Conference postseason championship on Saturday with a 14-8 victory against Dominican. The Bears and Wildcats did not meet during the regular season.

Wilmington’s top hitters include catcher Eddie Nevins, who enters the NCAA Tournament with a .442 average (72-for-163), eight homers and 55 RBIs. The Wildcats went 6-1 against ECC opponents during the regular season—going a combined 4-0 against Queens, Molloy and St. Thomas Aquinas, and winning two of three against Bridgeport.