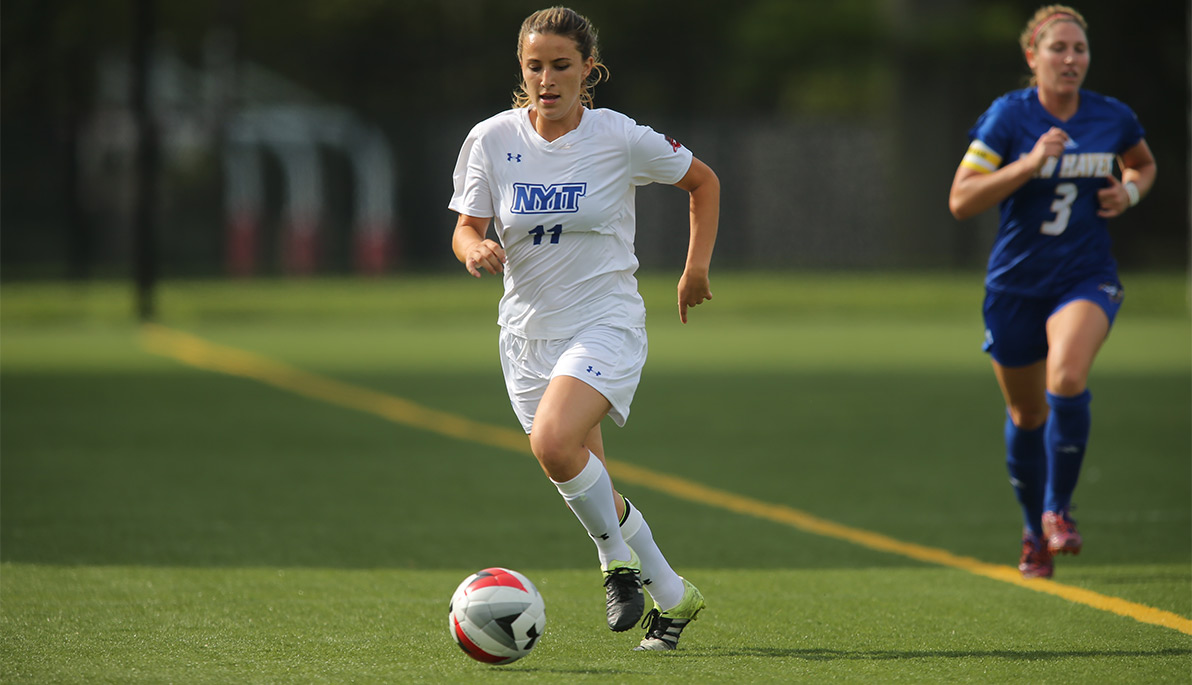 Following the first month of fall sport action, NYIT’s intercollegiate teams, including men and women’s soccer, women’s volleyball, and women’s tennis have posted an overall record 32-9-1 (wins, losses, and ties).   Additionally, the men and women’s cross country programs are hard at work preparing to compete for the East Coast Conference (ECC) titles and NCAA appearances at the end of October.

Men’s Soccer
The NYIT men’s soccer team currently sits fifth in the ECC with an overall record of 7-3-1 and ECC record of 2-1. NYIT won their last two conference games, outscoring opponents 6-1. Krishen Patel ranks in the top five in the ECC in goals (6), assists (3), and points (15); Ben Wilson ranks fourth in the league in assists (4); and goalkeeper Jonathan Rico is fourth and third, respectively, in saves (34) and save percentage (.756).

The team will close out the regular season on Saturday, October 29, when they host LIU Post in a Battle of the Boulevard and celebrate the graduating senior class prior to kick-off.

Volleyball
The NYIT women’s volleyball program was on a mission to win in September. They posted a 14-2 overall record and 3-0 record in ECC league action. Having won their last four games, the team is now tied for first in the standings with Bridgeport, who the Bears play on Thursday, October 13. To date, the team has had three Player of the Week honorees and Allison Fowler has taken home Setter of the Week three times. Karley Brewster earned her first weekly honor on September 19.

Karolina Moderova and Tiffany Verni appear in the top five in kills per set and total kills. Rachel Guida is second in the conference in both hitting percentage (.324) and blocks per set (1.14). As a team, volleyball ranks in the top 50 in several NCAA Division II categories, including total team blocks, total team attacks, and opponent hitting percentage.

Women’s Soccer
In her inaugural season, Rachel Reeves led the Blue and Gold to a 3-4 overall record in the month of September with an 0-2 record in ECC play. Selected seventh in the preseason poll, the Bears play the bulk of their league schedule in October.

The team will close out the regular season on Saturday, October 29, when they host LIU Post in a Battle of the Boulevard and celebrate the graduating senior class prior to kick-off.

Cross Country
The men’s program posted their highest finish this year when they placed second at the York College Invitational on Sunday, October 25. Helping them was top-runner Tom Ruppel, who placed first out of a field of 164 with an 8k time of 28:06.0; it was his first collegiate first-place finish.

The women’s team placed second at their home meet on Saturday, September 17—their highest placement this season. Freshman Irene Chepleting has placed in the top five in all events thus far, and has been named ECC Female Rookie of the week three times.

The Cross Country East Coast Conference Championships will be held this year at Roberts Wesleyan on Saturday, October 22. The following weekend, the team will compete in the NCAA East Regional in Hopkinton Park, N.H. for a chance to run at the NCAA Championships.

Women’s Tennis
The NYIT women’s tennis program is well on their way to another ECC title; they currently have an unblemished record at 7-0 overall and 4-0 against ECC opponents. Newcomer Lena Dimmer was selected as Preseason Player of the Year. The team was unanimously picked as the favorite to win again this fall. (The Bears have won four consecutive ECC titles.) To-date they have won five matches by way of a shutout and only gave up three points otherwise.

The team also recently participated in the USTA/ITA Oracle Cup. Gabriela Siembab won the singles and then partnered with Karolina Pondusova to win the doubles crown. This is the second year in a row that NYIT will be sending a singles and doubles champion to the Small College USTA/ITA Nationals, which takes place this year in Surprise, Ariz.

NYIT has 13 intercollegiate athletics teams (six men’s and seven women’s programs plus cheerleading) based on the Long Island campus. Of those, 12 compete as NCAA Division II members in the East Coast Conference, and one competes as an NCAA Division I independent. For more information on all NYIT athletic teams, visit nyitbears.com.