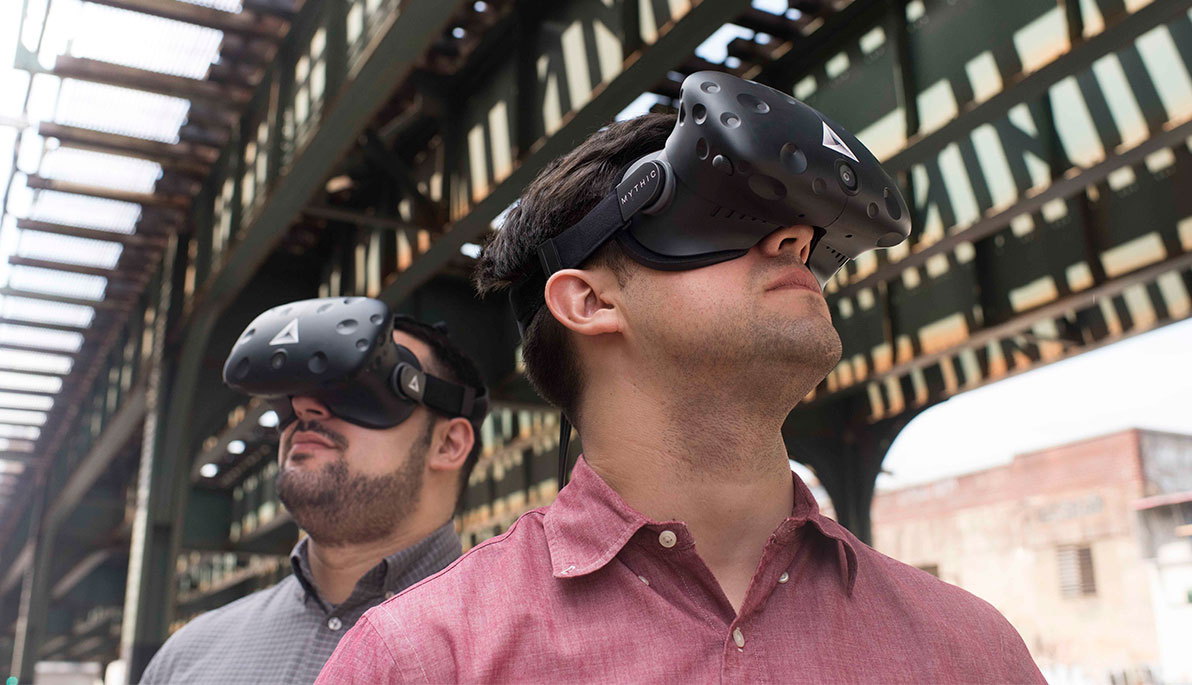 It’s hard to imagine what video games and architecture have in common, but two NYIT graduates have figured out a way to apply video game technology to architectural design and visualization. Their company, Mythic VR, offers an innovative way for real estate customers to “see” a property design virtually—before it even exists.

Michael Koutsoubis (B.Arch. ’14) and Andy Christoforou (B.Arch. ’14) first met playing league volleyball on rival teams in Long Island. Their paths crossed again late in their college career during a thesis class for NYIT’s five-year architecture program. They teamed up, and in 2013, they won an NYIT design competition.

After graduation, the two reconnected at an annual event for young alumni from NYIT School of Architecture and Design. “We talked about what we were working on,” says Koutsoubis. “Andy was experimenting with Unreal Engine [a technology used for video games that creates “real-time” experiences].” The rest, as they say, is history.

In real estate, developers will typically show buyers blueprints and models of units, but Mythic VR creates full-scale 3-D models for its clients to experience. “Instead of looking at a fixed image, a person puts on a VR headset and can explore a proposal like they would in a video game,” explains Koutsoubis. (Watch a demo.)

“We basically had to become game designers and software engineers,” says Christoforou. They knew how to build the 3-D models, he says, but had to prepare that model for people to virtually enter it. The duo also had to teach themselves how to launch and manage a business. “We watched a lot of YouTube videos,” laughs Christoforou. Both were employed at other jobs and spent months working after hours to develop their concept and research competitors in the market, and then incorporating as an LLC.

While theirs is not the only virtual “realty” product in existence, the partners are dedicated to creating the best immersive experience possible, sticking solely with desktop VR as opposed to mobile access. “In mobile, the quality is not there,” explains Christoforou. “Desktop offers a smoother experience; people are able to interact and it is much more immersive with body-tracking technology,” he adds. “Clients choose us because we can offer that level of photorealism in real-time. It’s not cartoony.”

Koutsoubis’ expertise is on the design of the VR user interface—how the person can control and change the virtual environment, use hand-held controllers, and access data. Christoforou, on the other hand, focuses on “architectural visualization,” building all of the materials, lighting, and details that the user will see.

Of course, there is some getting used to the headgear and equipment use. “Everyone reacts to it differently,” explains Koutsoubis. “Some people are hesitant to try the headset for fear of nausea, but we've found that by enabling a user to physically walk, instead of simulating motion, nausea is no longer a concern. A blue grid does warn the wearer when they approach the end of the space,” he says.

While Mythic VR started with single-family home buyers, their current client list includes architecture firms, large corporations, and real estate developers. Clients use their products both in design and sales. Mythic VR helps designers conceptualize an idea and experience it full-scale, while on the sales side, the tool helps buyers decide whether or not to buy property before ground has been broken. “We’re building virtual reality centers in real estate offices,” says Koutsoubis. “It saves costs because [the realtor] can sell prior to construction without needing a full-scale model unit, and it saves time because they can show their entire catalog of properties to a client in a single appointment.” They’ve also connected with a well-known startup accelerator in Silicon Valley and recently launched a VR center in Brooklyn for new development pre-sales.

These two innovators don’t see a disconnect between their formal architectural training and their current endeavors either. “Having a design degree in architecture is potentially undervalued because you can apply it in multiple ways,” says Koutsoubis. “For example, I’m not designing buildings, but I am designing 3-D user interfaces,” he says. “We came from a program where you had to have a lot of focus, drive, and patience to develop a design to its fullest potential.”

And their relationship with NYIT may not be over. Through a connection with Christopher D’Andrea, a 3-D designer and art director and advisor to NYIT’s Center of Excellence in Data Visualization, Entertainment, and Education Engineering, the team met with Charles Matz, associate professor and director of the center. The hope is that Mythic VR will be able to partner with the center and to provide future access for students and faculty members to their VR technology. “Mythic’s outlook on Virtual Reality is in-line with what the center believes is the future for digital media consumption,” says D’Andrea about the potential partnership. “We eagerly await to see where the path with Mythic will take us.”

But for now, as their business grows and evolves, Koutsoubis and Christoforou are enjoying the ride, traveling to California, Florida, and even Kentucky, and adapting their product for the needs of their growing client list. “We’re happy where we are now and the direction we’re moving in,” says Koutsoubis. “We’re looking to create a VR marketplace, where buyers can browse a city’s available real estate in a single session,” he says.