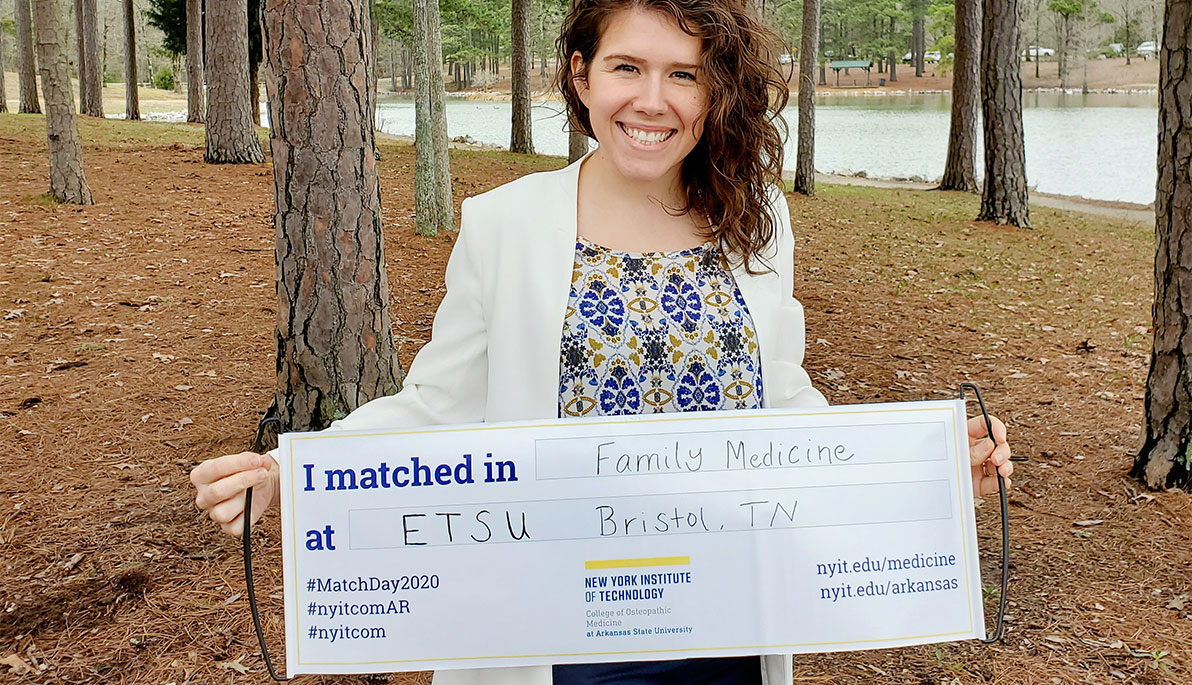 As U.S. healthcare professionals take to the frontlines in the fight against COVID-19, on March 20, NYIT College of Osteopathic Medicine’s (NYITCOM) future physicians accepted their next mission in healing: their medical residencies.

During this annual event, known as Match Day, NYITCOM students join fellow medical students across the country in learning their “matches” or where they will spend the next several years completing their medical residencies. Matches are determined by a computerized algorithm and kept top-secret from both the future doctors and the matching hospitals until they are opened.

While Match Day events are typically celebrated with large, in-person gatherings, this year’s event was held virtually via livestream. However, the virtual nature did not dampen spirits as the community banded together, and students took to social media to share their at-home celebrations and cheer on classmates.

“What an exciting day and important milestone for all of you. Obviously, I wish we could all share this moment in person, but don’t let the distance or virtual nature take away anything from your achievement,” he said. “What better time to take this monumental step forward than now, when we are most needed?”

At noon (Eastern Standard Time), students opened the long-awaited emails and cheers, confetti, and toasts ensued. NYITCOM’s Class of 2020 secured impressive residencies at institutions such as The Mayo Clinic, The Cleveland Clinic, Rutgers, and Penn State-Hershey, as well as specialties in orthopedic surgery, dermatology, psychiatry, pediatrics, emergency medicine, otorhinolaryngology, and many others.

The event was especially exciting for the NYITCOM-Arkansas community, which celebrated its inaugural Match Day. Speights and Deel shared their pride in the members of the first graduating class, who joined NYITCOM-Arkansas in 2016. The critical medical school site, located on the campus of Arkansas State University, was established to train physicians to help alleviate the physician shortage in Arkansas and the Mississippi Delta region, one of the most medically underserved areas of the country.

“It takes a special group of students to commit to being part of the inaugural class of a new medical school,” said Speights. “These students trusted us to provide them with a top-notch medical education, and they dedicated themselves to working incredibly hard to make themselves quality candidates for residencies. I’m just so proud of every one of them.”

Nearly half of the NYITCOM-Arkansas medical students who participated in the match received positions that will keep them in Arkansas or a Delta state. While 72 percent of the inaugural class was placed into primary care residencies, many also placed into some of the most competitive medical specialties, including anesthesiology, and emergency medicine, among others.

“We’re pleased that many of our students landed positions in this state and region,” Speights said. “Before our doors opened, we spent significant resources to help create new residencies in Arkansas. Since 2015, 11 new programs have opened around the state, and our students matched into six of those programs. We’re committed to continuing to help grow graduate medical education in this state to provide even more opportunities for our students to stay here.”