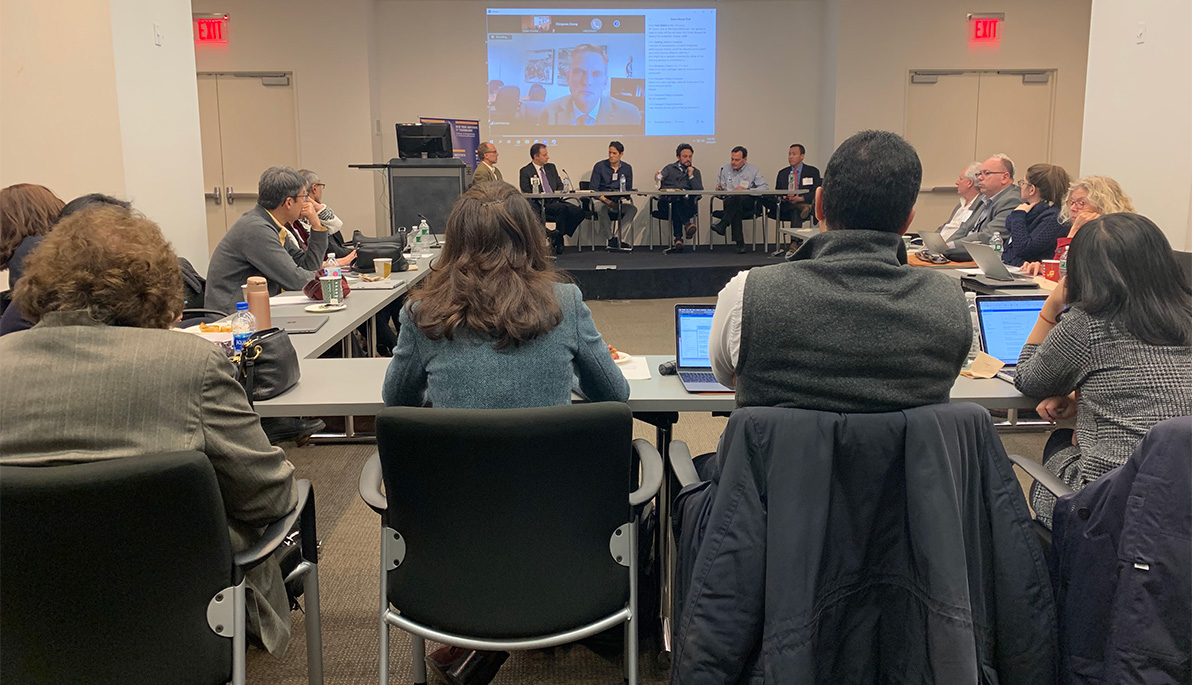 Imagine the world is in an ecological crisis, and consumers have to choose among three public goods. Would you pick food? Energy? Or water?

It’s obviously a trick question. Food, energy, and water (FEW) resources are inextricably connected. It takes water to grow food and energy to transport it to your local market (and then to your home). Water is required to generate energy, and we use energy to produce clean water and treat wastewater. Together, these three intertwined necessities are known as the food-energy-water (FEW) nexus.

In an event sponsored by the American Institute of Chemical Engineering (AIChE), with support from the U.S. National Science Foundation (NSF), experts gathered at the NYIT Auditorium on Broadway on December 5 and 6 to address emerging problems in urban FEW distribution at the AIChE and New York Tech Conference: Food-Energy-Water Nexus. Associate Professor of Electrical and Computer Engineering Ziqian (Cecilia) Dong, Ph.D., and David Nadler, Ph.D., associate professor and chair of Environmental Technology and Sustainability, co-organized the event, which included Nada Anid, Ph.D., New York Tech’s vice president for Strategic Communications and External Affairs. Anid, who is the chair of the AIChE’s Public Affairs and Information Committee, a member of the AIChE Foundation’s Corporate Council, and a member of the Managing Board of the Institute for Sustainability, gave a keynote address on the conference’s second day. She emphasized the importance of networks and partnerships to tackle both the technical and engagement challenges associated with the FEW nexus. 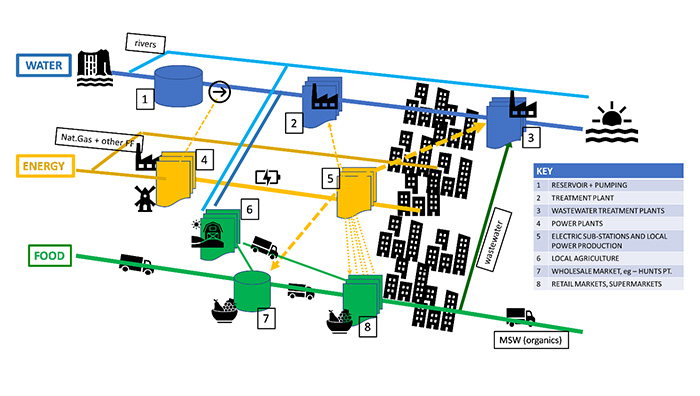 Dong has been researching FEW issues for the last five years. In 2017, she received a workshop grant from the NSF to study the modeling and optimization of FEW resources and formed a research coordination network (RCN). Most recently, she received funding from the NSF to establish the City-as-Lab RCN. This five-year project will closely engage stakeholders with the scientific community to identify challenges and seek solutions in FEW infrastructure for a sustainable urban environment. Dong sat down with The Box to talk about how she became interested in FEW issues, as well as to explain some of the research into FEW concerns that are affecting the entire planet—especially cities.

How did you, as an electrical engineering professor, become interested in FEW questions?
Attending workshops on the energy and water nexus a few years back got me interested in this research direction. I was looking at how data and sensing technology can help answer certain questions. This is a very broad problem that requires a multidisciplinary approach and stakeholder engagement to collaboratively generate knowledge and seek for solutions.

What are some of the big issues you and your colleagues addressed at the conference?
The conference focused on critical concerns on how we provide and maintain food, energy, and water (FEW) supplies in urban environments as the population continues to increase. Our conference topics provide deeper understandings of this problem’s key areas, which include, but are not limited to, the following:

What are some factors that endanger FEW supplies?
We have growing populations in more dense urban areas, an extreme climate that disrupts transportation, droughts that impact food production across the globe, and sea level rise and hurricanes that will constantly test the FEW infrastructure and supply systems. 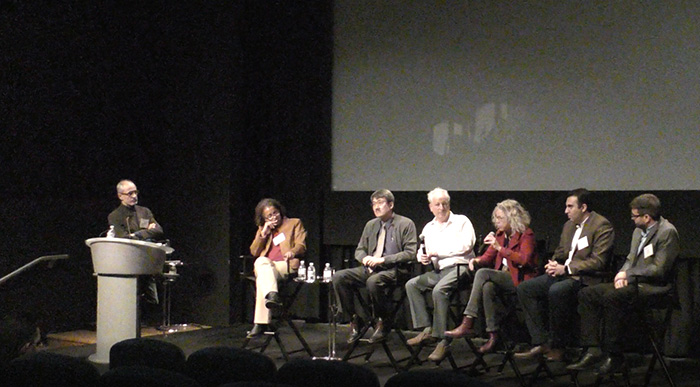 What situations in New York City should we be concerned about?
Hunt’s Point Cooperative Market, in the Bronx, is the largest food distribution center in the United States, and it’s located in an area vulnerable to flooding. Imagine the disruptions in the food supply, not to mention the contamination to the water, if that area went underwater.

What are some climate change impacts on FEW supplies that are already observable to the average person? What are some impacts that are less noticeable but still taking place?
Extreme weather events, including heat, tornados, flooding, drought, and wildfires, are already more frequent. What is less noticeable is that some of the world’s major food baskets (including California) are experiencing water shortages or drought, and soil degradation across the globe will reduce total food output. The security of the food supply will become more of a concern once production and distribution systems are more stressed.

What steps can ordinary people take to make things better?
People should examine their own consumption footprint to make more environmentally friendly choices, such as the following:

What specific solutions have experts proposed to help maintain FEW supplies in urban environments?
One thing we’re looking for in New York City is to reduce greenhouse gas emission by 80 percent by 2050. Experts have been examining various ways we can achieve this citywide goal by understanding the interconnectedness of the FEW systems and by optimizing our use of resources. For the example of food waste, a few approaches have been tried, such as changing policies to reduce the amount of food waste in school systems and processing and reusing food waste as a source of energy or nutrient recovery (via biogas or composting).

Describe a worst-case scenario regarding FEW in urban areas.
People will need to look for alternative sources of food if traditional farming practices cannot meet demand. For example, we may need to use bugs and worms as sources of protein if we can’t adopt a plant-based diet. There is also a discussion on lab grown meat. New agricultural technology that produces crops with high yield and a lower carbon footprint needs to be developed.