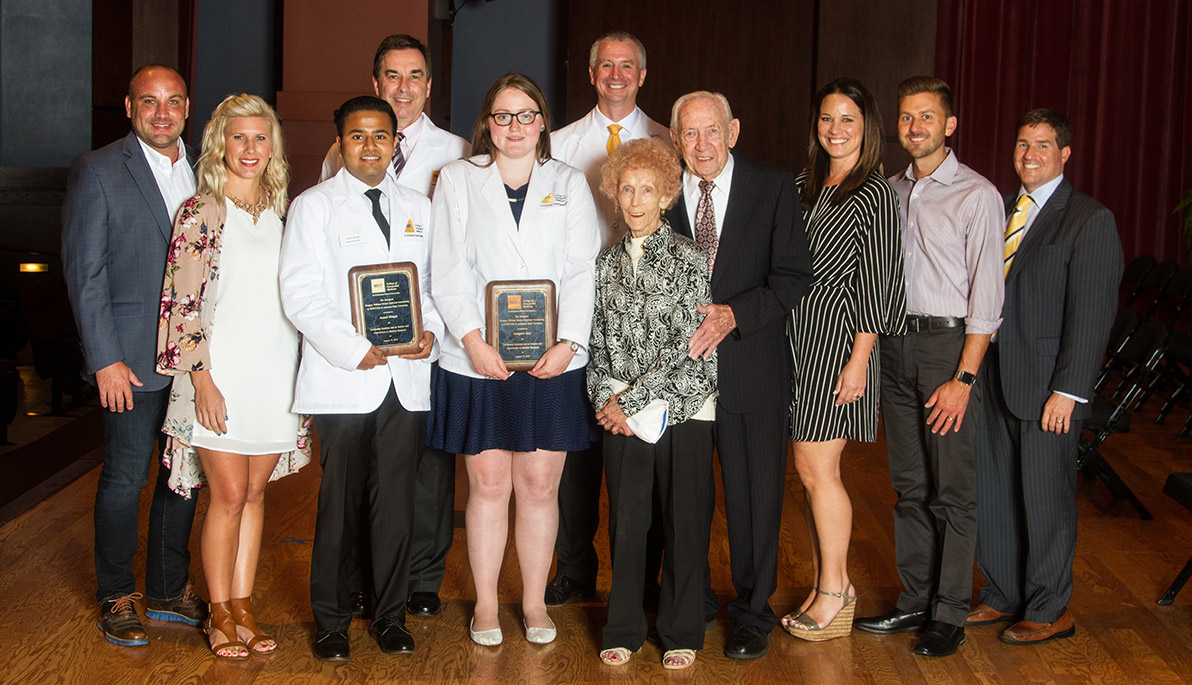 The decision to become an osteopathic physician takes a profound desire to help others and a readiness to commit to years of intensive study. Financing medical school, however, can be difficult. Now, a family from Arkansas and Michigan is helping fund the dreams of future doctors by creating the first endowed scholarship at NYITCOM at Arkansas State University (A-State).

The Gregory William Berner Memorial Scholarship is named in honor of Detroit-native Gregory William Berner, who recently passed away from Sporadic Creutzfeldt-Jakob disease (CJD), a rare brain disorder. At this year’s white coat ceremony, second-year students Anand Bhagat, OMS II, and Margaret Kell, OMS II, became the first aspiring D.O.s to benefit from the $50,000 endowed scholarship. They were chosen based on financial need, leadership qualities, and their interest and dedication to medical research.

“This historic scholarship is the first endowed scholarship for the first osteopathic medical school in the state of Arkansas,” said Shane Speights, D.O., site dean of NYITCOM at A-State. “When I met with the Berner family, showed them our campus, and explained what our mission is for the state of Arkansas and this region of the nation, they immediately became engaged in our endeavor and began exploring ways to assist us.”

NYITCOM at A-State was established in 2016 in part to address the state’s healthcare needs. At the time, Arkansas ranked 49 out of 50 in its population’s health status and 48 out of 50 in the percentage of active physicians per 100,000 people, according to national studies. This gift helps ensure students in the area can be trained to serve as primary care physicians and specialists in this underserved region.

“My wife, Christina; my sister, Melanie; and my grandfather, Al Berner are all a part of ensuring that my dad has a legacy through this scholarship and the Gregory William Berner Foundation,” said Andrew Berner. “My family and I are looking forward to a long relationship with NYIT as it continues to grow a first class medical school at Arkansas State University.”

Gregory William Berner passed away on December 16, 2017, just four months after his CJD diagnosis. In addition to showing their gratitude to the medical community, the family hopes the memorial scholarship and endowment will bring a continued awareness of this rare disorder to the next generation of medical professionals.

“Their generosity cannot be overstated,” added Speights, “and their dedication to the memory of their father and son, Mr. Gregory Berner, is to be admired. It is a privilege to have their support.”