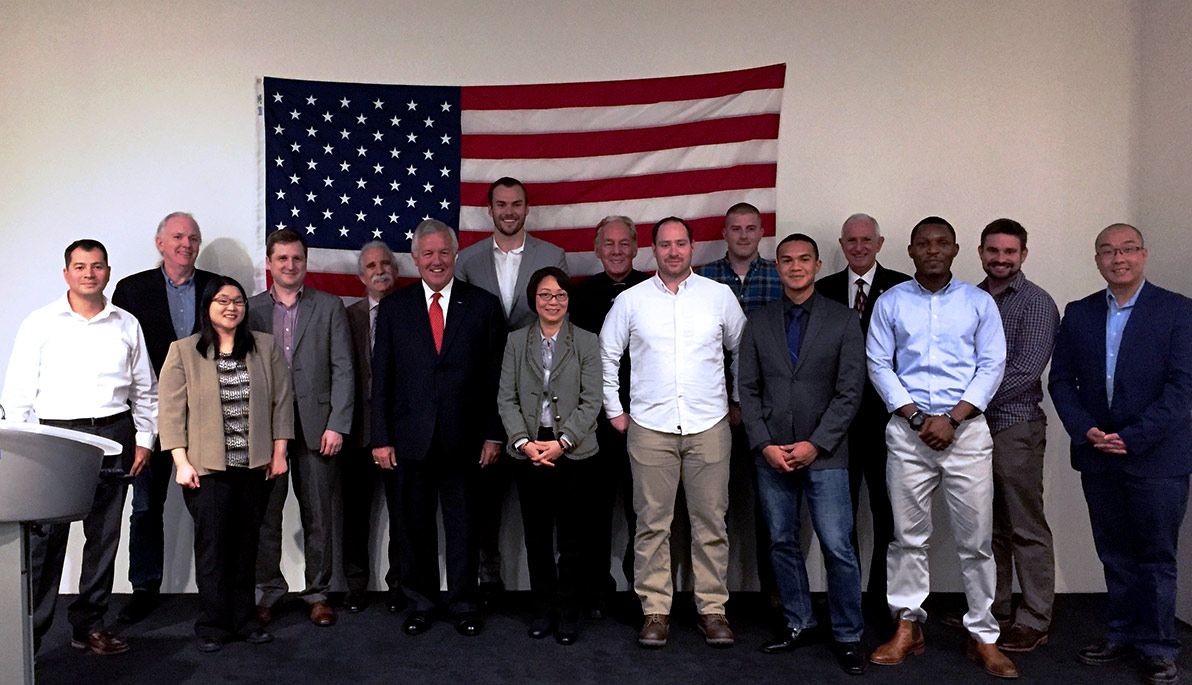 Photo: Veteran members of the NYIT community at the dinner at NYIT-Manhattan.

Members of the NYIT community who are veterans, along with their families and friends, were recently honored at a welcome dinner that took place on the Manhattan campus. The evening was a chance for the students, alumni, and staff and faculty members to connect with one another and celebrate their service. “The average citizen must be a good citizen in order to succeed. You, veterans, are good citizens,” said Peter Kinney, retired U.S. Army infantry colonel and NYIT chief of staff, who was the guest speaker.

The inaugural dinner is part of an ongoing effort to increase NYIT’s veteran outreach. A lunch for veterans also took place on the Long Island campus on October 18.

Frank Calderon, NYIT senior advisor for enrollment management and retired first sergeant, gave opening remarks and introduced Kinney. Later, Patrick Love, Ph.D., vice president for student affairs, gifted each veteran with a specially designed “challenge coin” that bears the NYIT logo on one side and recognizes the values of student affairs on the other. Challenge coins are typically presented to service members to recognize achievements.

The idea for honoring NYIT’s veterans came about when Steven Donohue (B.F.A. ’16), who served in the Air Force, attended a Student Government Association community meeting earlier this year. He expressed his feelings of alienation at being an older student with a different background from most of his peers. He also felt that NYIT did not have a lot of resources for veterans.

“His experience really made me want to make a change,” said Deepa Bhalla, senior director of enrollment services, who organized the event along with other members of Student Affairs. Following the community meeting, she launched a committee made up of staff volunteers to determine how to better serve veterans and convened focus groups on both the New York City and Long Island campuses. In the focus groups, students had expressed a desire for more networking opportunities aimed at bringing the veteran community together. The dinner was one result of the initiative. 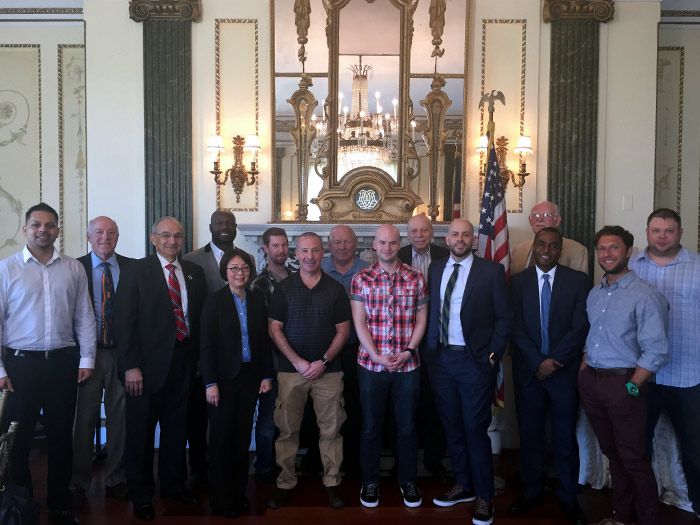 Veteran members of the NYIT community at the lunch at NYIT-Long Island.

Randall O’Shea, a reservist in the Air Force and a sophomore majoring in computer science, is the lead veteran consultant for NYIT’s Community Service Center—a newly formed position as a result of the focus groups. As the guests dined and mingled, he spoke about the goals of the university’s new veteran network: “I want the group to be a source of information and resource, a way to encourage awareness and interaction with non-veteran students, and a tool for recruiting more veterans to NYIT,” he said. He then joked that the dinner featured “about 500 percent more” fellow veterans than he previously had known existed.

Won Palisoul, U.S. Navy petty officer second class and board member of the Women Veterans and Families Network, spoke about transitioning from military to civilian life. “It’s just a matter of building a new network, and I think NYIT has facilitated that,” said Palisoul, who is married to fellow Navy enlistee David Palisoul (B.S. ’14).

More initiatives to serve NYIT’s veteran community are also underway. As another outcome of the focus groups, staff members from enrollment management, academic affairs, financial affairs, and student affairs were given training on topics such as benefits, healthcare, and mental health first aid to better address the specific needs of veteran students. A special veteran orientation allowed students to network and meet Nancy Borchers, associate registrar and the veteran certifying official.

“I’m glad to see this initiative is taking off,” said Gary Baxter, a communication arts graduate student who served in Vietnam and attended the dinner.

For more information about the initiative, contact Deepa Bhalla. Current and alumni student veterans can join the Veterans of NYIT Facebook group.