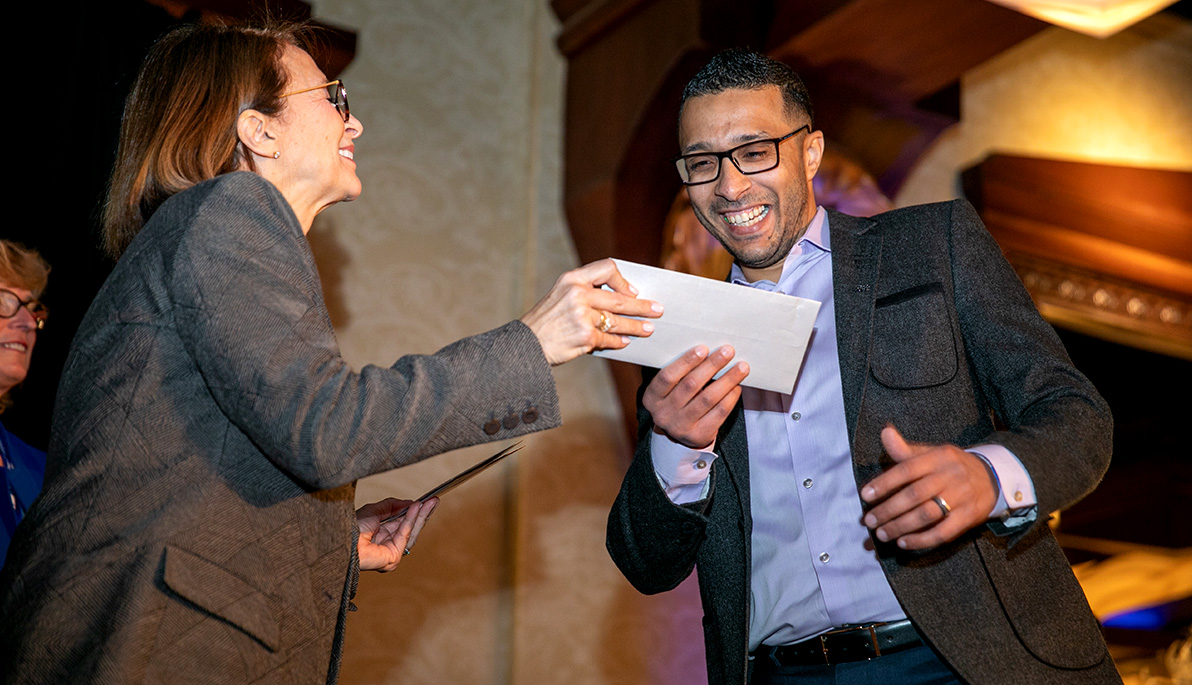 Pictured: Mahmoud Elhagagy receives the envelope containing his match from NYITCOM Associate Dean Donna-Marie McMahon, D.O. He will complete a residency in urology at the University of Cincinatti College of Medicine.

On March 18, students from the College of Osteopathic Medicine’s (NYITCOM) Class of 2022 discovered what their futures hold after medical school.

During this annual event, known as Match Day, medical students from the Long Island (NYITCOM-Long Island) and Jonesboro (NYITCOM-Arkansas) locations join future physicians across the country in learning of their “matches,” or where they will spend the next several years completing their medical residencies. 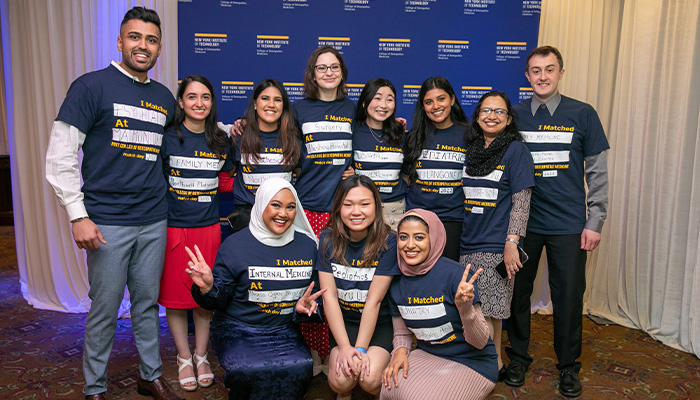 Upon completing medical school, physicians must complete a residency to obtain their license to practice medicine in the United States. Residencies typically last three to seven years, depending on the specialty. Matches are determined by a computerized algorithm and kept top-secret from both the future doctors and the matching hospitals until they are opened. Earlier this year, several students also participated in the military match, committing to complete their residencies by serving in a branch of the armed forces.

The NYITCOM-Long Island ceremony was held at the Crest Hollow Country Club in Woodbury, N.Y.; the NYITCOM-Arkansas ceremony was held at the Red Wolf Convention Center on the campus of Arkansas State University. The event was the first in-person Match Day celebration for NYITCOM-Arkansas, which graduated its first class of physicians in 2020, at the height of the COVID-19 pandemic.

Following remarks from medical school leaders, including NYITCOM Dean Nicole Wadsworth, D.O., and NYITCOM-Arkansas Site Dean Shane Speights, D.O., the students ripped open envelopes with the location of their residency match. Screams of joy and hugs ensued as the Class of 2022 celebrated the long-awaited news.

Many graduates from NYITCOM-Arkansas’s Class of 2022 will play a vital role in alleviating the physician shortage in the Mississippi Delta region, which is one of the most medically underserved areas of the country. More than half of this year’s class who participated in the match received positions that will keep them in Arkansas, a state contiguous to Arkansas, or another Delta region state. That includes 21 students who were placed in Arkansas residency programs and another 14 who will stay within 100 miles of the state’s border in places such as Memphis, Tenn., Tulsa, Okla., Southaven, Miss., and Joplin, Mo. 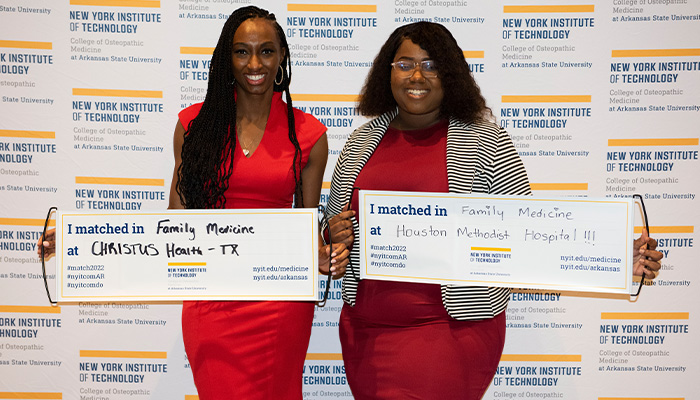 For some future physicians, like Mahmoud Elhagagy, a student in the Émigré Physicians Program (EPP) at NYITCOM-Long Island, medicine runs in the family. Elhagagy was inspired to follow in his father’s footsteps, a hard-working and passionate urologist who practiced in the family’s home country of Egypt. Elhagagy will complete a residency in urology at the University of Cincinnati College of Medicine after graduation. The timing of this news was also especially meaningful for him, as he recently lost his father to COVID-19.

“This is just as much his success as it is mine, and I wish more than anything that he could live this moment with me,” said Elhagagy. “Matching into the urology field means everything to me. It is the best way to honor my father’s legacy, including giving back medically to my community in Egypt and working with the underserved population in my new home country, the United States. I am grateful for the Émigré Physician Program, which gave me a chance to become a U.S. medical graduate and have a future in this competitive and wonderful surgical specialty.”

While some Match Day results will take students to far-away places, they will also bring others closer to home. NYITCOM-Long Island’s Alexander Morris’s parents and wife jumped and cheered as he learned that he was accepted into a neurology residency at Temple University. This was welcomed news for Morris, who grew up near Philadelphia and where his family still resides. 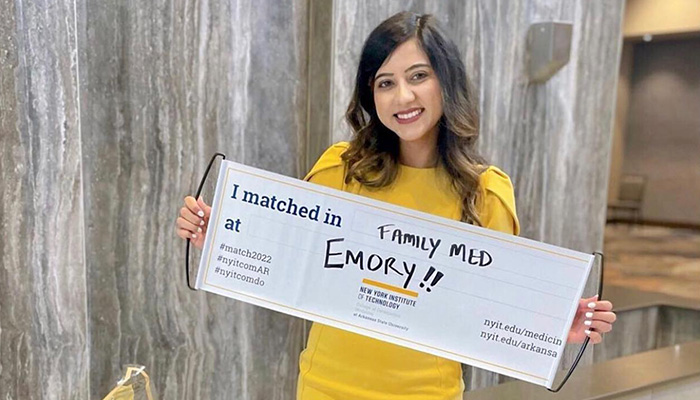 For Arkansas native Taylor Rutherford, learning that she matched into an internal medicine residency at NEA Baptist was a dream come true. “It’s what I wanted the most,” she said, adding that she plans to help tackle the region’s rural health disparities head-on by establishing working relationships with her patients and finding ways to make medicine more affordable for them. “I will listen to them no matter who they are, where they come from, or what their status is,” says Rutherford.

Here is a sample of the many impressive residencies earned by NYITCOM’s Class of 2022: