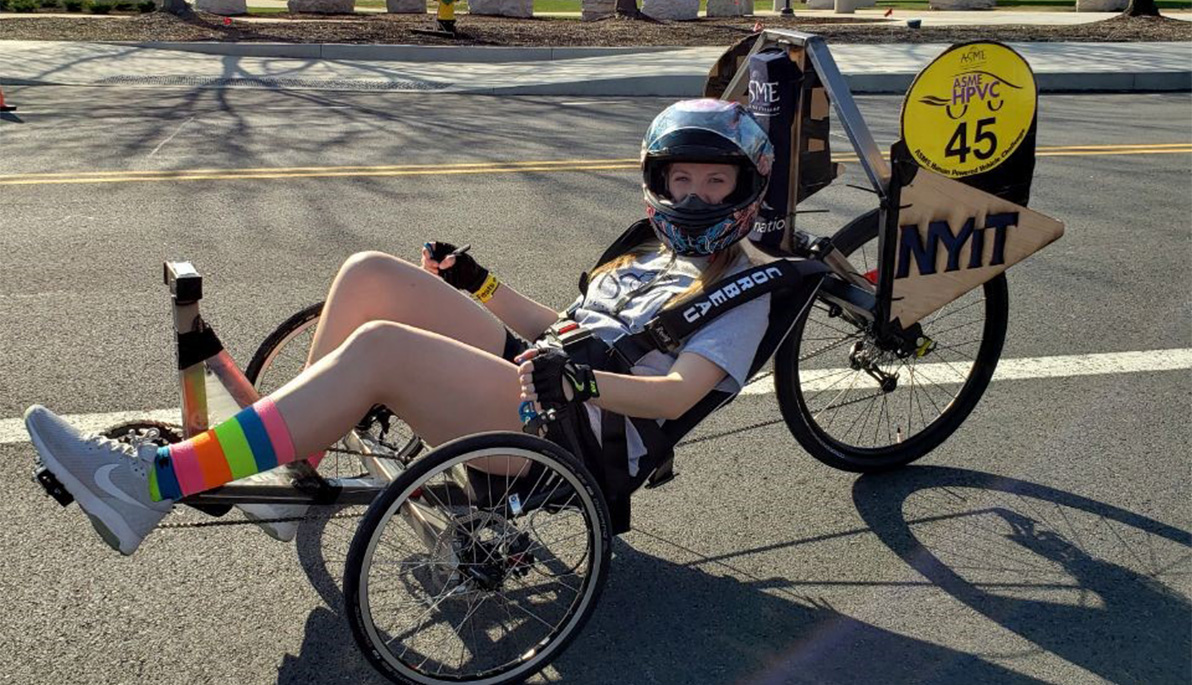 At the American Society of Mechanical Engineers (ASME) E-Fest (engineering festival) from April 15 to 18, eleven student members of NYIT ASME put their engineering skills to the test in the Human Powered Vehicle Challenge (HPVC). The team designed and built a vehicle, modeled after recumbent tricycles, and participated in three races, including a women’s speed event, a men’s speed event, and a two-and-a-half-mile endurance race.

“The inspiration for this competition stems from the notion of providing an alternative means to human transportation for underdeveloped countries,” explained Alexandra Kawecki, a senior studying mechanical engineering in NYIT School of Engineering and Computing Sciences. “The endurance race consisted of a relay and obstacle course that simulated the everyday challenges and conditions these human powered transportation vehicles would encounter.” 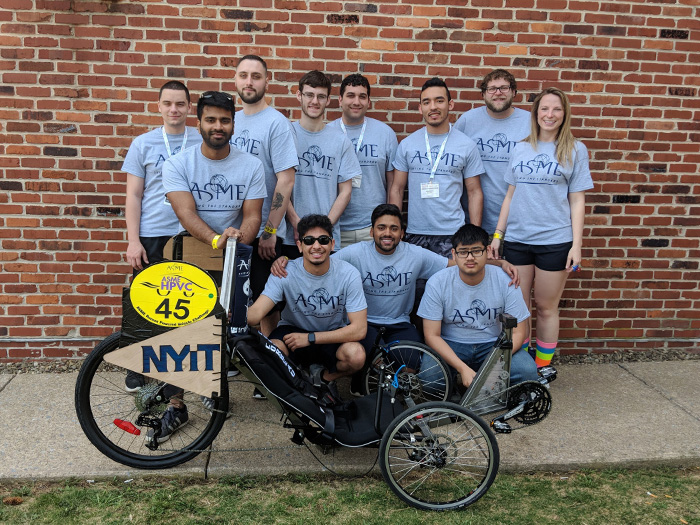 Members of the NYIT American Society of Mechanical Engineers (ASME) at the ASME E-Fest.

This was the first time the team competed in a racing challenge at this festival. “We originally planned to compete in the same student design competition we have in past years. However, we decided to push ourselves outside of our comfort zone and take on a competition which would test us as engineers and prepare us for the obstacles and challenges we might face after graduation,” said Kawecki.

Three weeks before leaving for the competition, the team brainstormed ideas for the vehicle’s design and researched ways to build it. They split into groups and investigated the best materials to use. They also visited the Student Machine Shop, where they learned how to weld, turn on the lathe, cut with band saws, and mill. “This was really important because [these skills aren’t] necessarily taught in the classroom, but we may potentially encounter them after graduation,” Kawecki said.

NYIT team member Jason Frank crafted a custom laser-etched logo of a triceratops for the vehicle, which the team named Tricerbike. “The detailed parts from the laser cut machines were certainly an eye catcher,” said Kawecki, who came in 19 out 47 in the women’s speed event. “I was very excited to race and proud to represent such an amazing team,” she said.

At the end of the three-day event, NYIT came in seventh in aesthetics. Everyone in the group was happy to have stepped outside of their comfort zone to take part in a new challenge. “It’s worth mentioning that not a single member on the team had much experience with building any sort of tricycle vehicle,” Kawecki explained. “It was a tremendous achievement for us that in such a relatively short period of time [we were able to build this bike].”