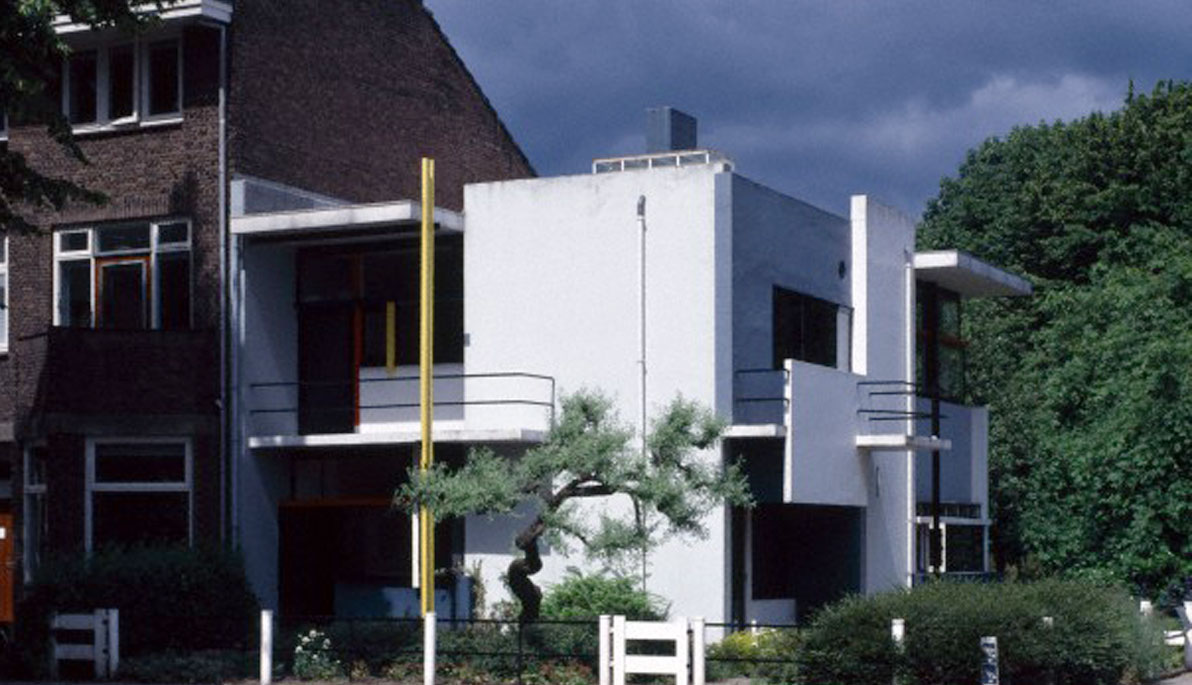 Photo (above): The Rietveld Schröder House in Utrecht was the childhood home of Johanna (Han) Schröder, founder of NYIT’s interior design program.

In its spring 2013 issue, NYIT Magazine reported on Johanna (Han) Schröder [1918-1992], who smashed the glass ceiling before the term made its way into public discourse. The founder and intellectual force behind NYIT’s interior design program was only one of two independent female architects among the nearly 3,000 registered male architects in the Netherlands in 1954.

Schröder began shaping her ideas about design and architecture in Utrecht, where she lived in the Rietveld Schröder House, now a historical site and museum. In 1924, when it was built on the fringe of a grass field, the house was a model for the active lifestyle desired by Schröder’s mother, Truus, who collaborated on the bilevel structure with architect Gerrit Rietveld, a member of the artistic movement De Stijl (Dutch for “The Style”).

The house symbolizes the movement’s utopian ideals of spiritual harmony and order. It is an open-plan space with floor-to-ceiling windows and walls meant to slide out by day and divide rooms at night. Its design diverged from the European homes of the early 20th century that featured narrow hallways and compartment-like rooms. Schröder’s living space was malleable, offering her widowed mother the flexibility and independence to raise and educate her children.

“An interior should allow for behavior of various kinds,” noted Schröder in her personal writings. “The strength and beauty of this background will affect the user and gradually make him see, think, and behave differently.”

Schröder would apply this philosophy to a teaching career in the United States, drawn by a restless urge to start over and a curiosity for American life. After a stint for an architect in Los Angeles, she sought academic positions on the East Coast. She taught at NYIT from 1967 to 1979 and overhauled the interior design curriculum to compete with New York’s best design schools.

“She was a gifted individual, so enthusiastic in both her classes and work,” says Janet DeCecilia (B.F.A. ’70), who studied with Schröder at NYIT and later served as coordinator of the department when her mentor left to teach at Virginia Commonwealth University.

“Han grew up in an experiment, and it influenced her whole life,” says Martha Siegel, chair of the Department of Interior Design. “She shaped NYIT’s program to train students to think of an interior environment as a 3-D space that is transformable and relates to other spaces.”

Watch for the next issue of NYIT Magazine, coming in mid-October. This content is excerpted from the magazine’s spring 2013 issue and is part of The Box’s “60 Years in 60 Days” series in celebration of NYIT’s 60th anniversary in 2015.