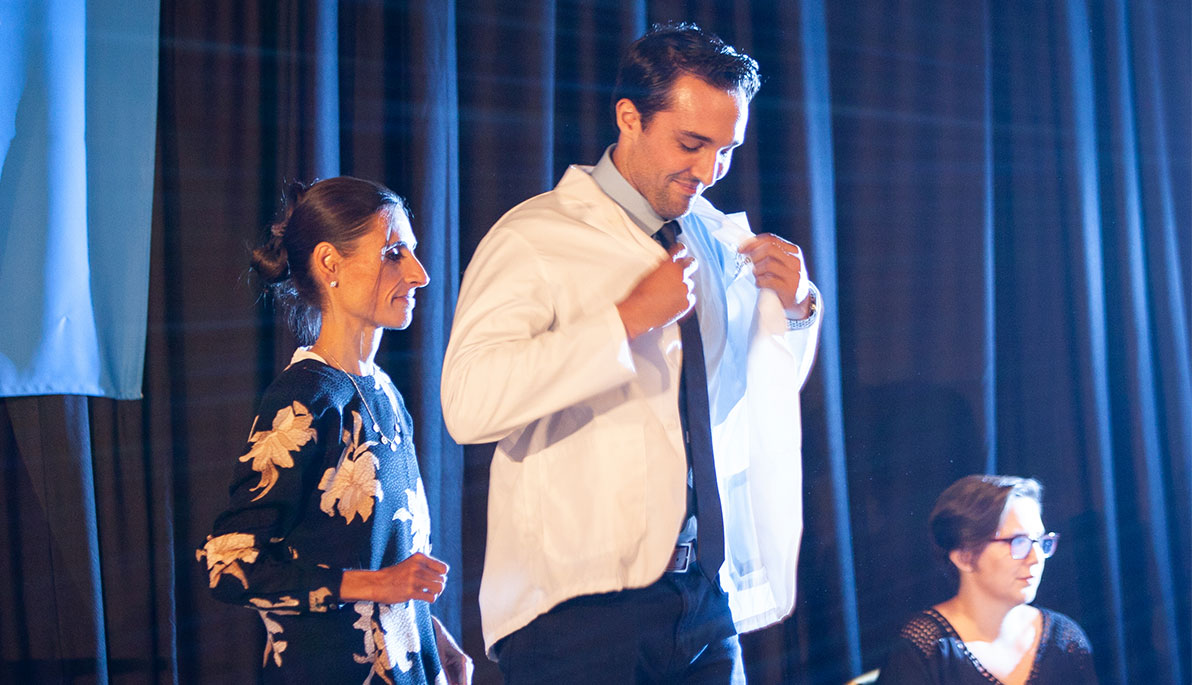 Pictured: An NYITCOM student is coated at the White Coat Ceremony held at the Crest Hollow Country Club.

A week of celebration ensued at NYIT College of Osteopathic Medicine (NYITCOM), as the newest medical students of the Long Island (Old Westbury, N.Y.) and Jonesboro locations received their white coats, a rite of passage signifying their official start in medical school.

NYITCOM at Arkansas State University (NYITCOM at A-State) kicked off the celebration on August 10, with a White Coat Ceremony held in the Fowler Center on the A-State campus. Second-year students Anand Bhagat and Margaret Kell were awarded the Gregory William Berner Scholarship, NYITCOM at A-State’s first endowed scholarship.

NYITCOM at A-State’s newest class is eager to support the mission of improving healthcare in the Mississippi Delta region and other underserved communities. Seven of the eight Delta region states were represented by the 120 students of the NYITCOM at A-State Class of 2022. Among these students was Roland Brutus of Arkansas, a student intent on continuing the legacy of his physician father, who tragically passed away while helping medically underserved communities in Mexico. 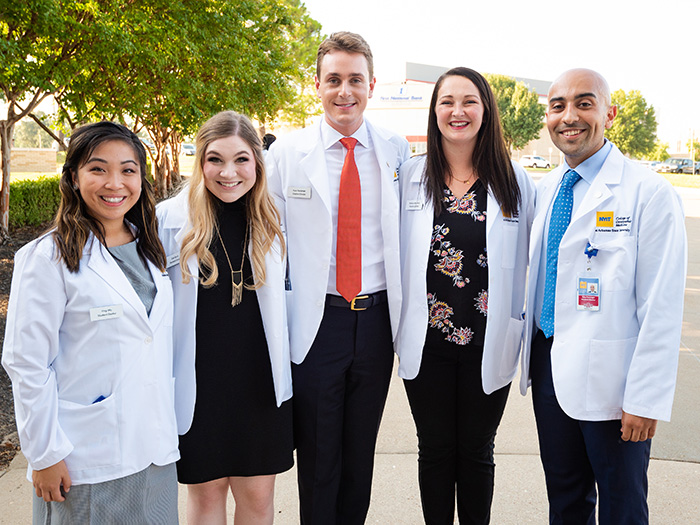 “Although his voice can no longer be heard, the memory of his altruistic life continues to speak into my heart and conscience. The joint work of my father and mother in providing high-quality holistic-care to patients served as an inspiration for me to enroll at NYITCOM as a medical student,” said Brutus, who was coated by his mother, also a physician, to the sound of thunderous applause.

“In a time like no other the need for talented, forward-thinking physicians is great, and in this region of the nation especially,” said Shane Speights, D.O., site dean of NYITCOM at A-State. “It is for that reason that NYIT College of Osteopathic Medicine has stepped forward to help address that need.”

The NYITCOM Long Island community continued the momentum on August 15 at the Crest Hollow Country Club, where 295 new medical students received their white coats. Six of the students were coated by family members who are also physicians and NYITCOM graduates, known as legacy coaters, including physician and NYITCOM Assistant Professor Zachary Levokove (D.O. ’94), who coated his son Brandon Levokove.

Nazifa Tokhi, who was coated by her brother Billal Tokhi (D.O. ’15), talked about her admiration for physicians.

“Our sister was a cancer survivor, so as kids we spent a lot of time in hospitals, and I looked up to the physicians,” she said. “I’ve always seen physicians as heroes, and now I have the opportunity to be a hero too.” 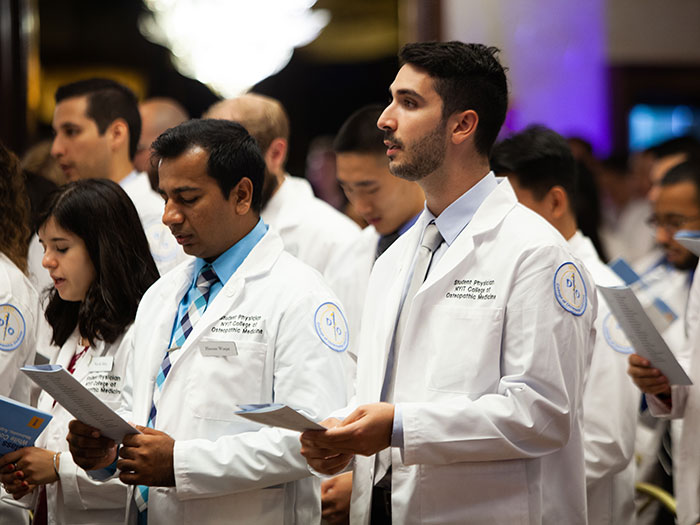 The NYITCOM Long Island Class of 2022 taking the Student Pledge of Commitment.

The NYITCOM Long Island Class of 2022 will go on to fill the shoes of the Class of 2018, which boasted a 99 percent placement rate. Students from this latest graduating class have gone on to pursue premiere residencies in specialties ranging from ophthalmology, neurological surgery, anesthesiology and pediatrics, at institutions such as Tufts Medical Center, Virginia Tech, Robert Wood Johnson Barnabas Health, and other prestigious institutions.

As he did several days earlier in Jonesboro, Jerry Balentine, D.O., dean of NYITCOM and vice president of Medical Affairs and Global Health, welcomed the newest Long Island medical students. “The white coat symbolizes many things. For you, right now, it symbolizes a change. A new path, a profession that you have chosen and in a small way has chosen you,” he said.

Since its introduction in the medical profession in the late 1800s, the white coat has been a symbol of cleanliness, trust, and healing.