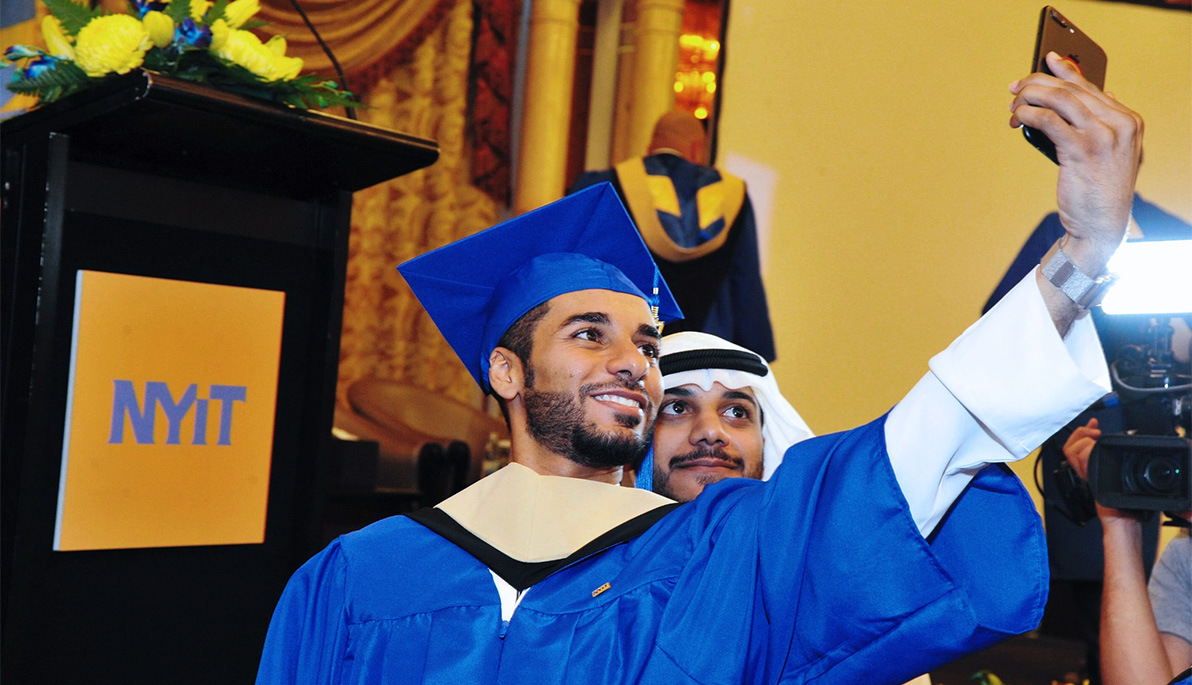 Sixty-six new graduates earned bachelor’s and master’s degrees at NYIT-Abu Dhabi’s eleventh graduation ceremony on May 25. But the celebrating didn’t end on commencement for the graduating class, who later gathered with family and alumni at the third annual Middle East alumni dinner.

NYIT-Abu Dhabi’s graduation ceremony follows closely on NYIT’s 56th Commencement held on the Old Westbury campus. A number of leaders and influencers addressed the graduates and their guests, including NYIT Interim President Rahmat Shoureshi, Ph.D., who said that “even the best education, highest grades, and most careful planning will not prepare you for the twists and turns that life has in store for you.”

Guest speaker Elias Sayah, president of Sayah Engineering Consulting Bureau and vice chairman of AmCham Abu Dhabi, told the graduates: “You have a solid and strong foundation; you now have to build a tall structure on that foundation, as you have seen around you in the various emirates.” Other guest speakers included alumni Hanadi El Solh (B.F.A., ’14) and Rassel Kassem (M.B.A., ’08), who also received awards from Shoureshi.

The new graduates, who earned degrees in business administration; interior design; instructional technology; and information, network, and computer security, also enjoyed remarks by one of their own, exemplary graduate Djan Valerine Javier, who just completed an Interior Design degree. “What NYIT has done for me, personally, was make me a smarter, stronger, and a much more confident individual, and clearly I'm not alone in this,” she told her classmates.

The alumni dinner, held at Abu Dhabi’s Khalidiya Palace Rayhaan, welcomed NYIT’s graduates across the years. Haji Arif and Nassir Etout, successful business graduates of NYIT’s Class of 2014, talked about the value of higher education and of staying connected to NYIT’s alumni network. “For example,” said Etout, “if you want to go play sports, you can ask some alumni, and for sure you will find someone who will go along with you.” Arif added, “Getting a degree is not the end. It’s a new beginning.”