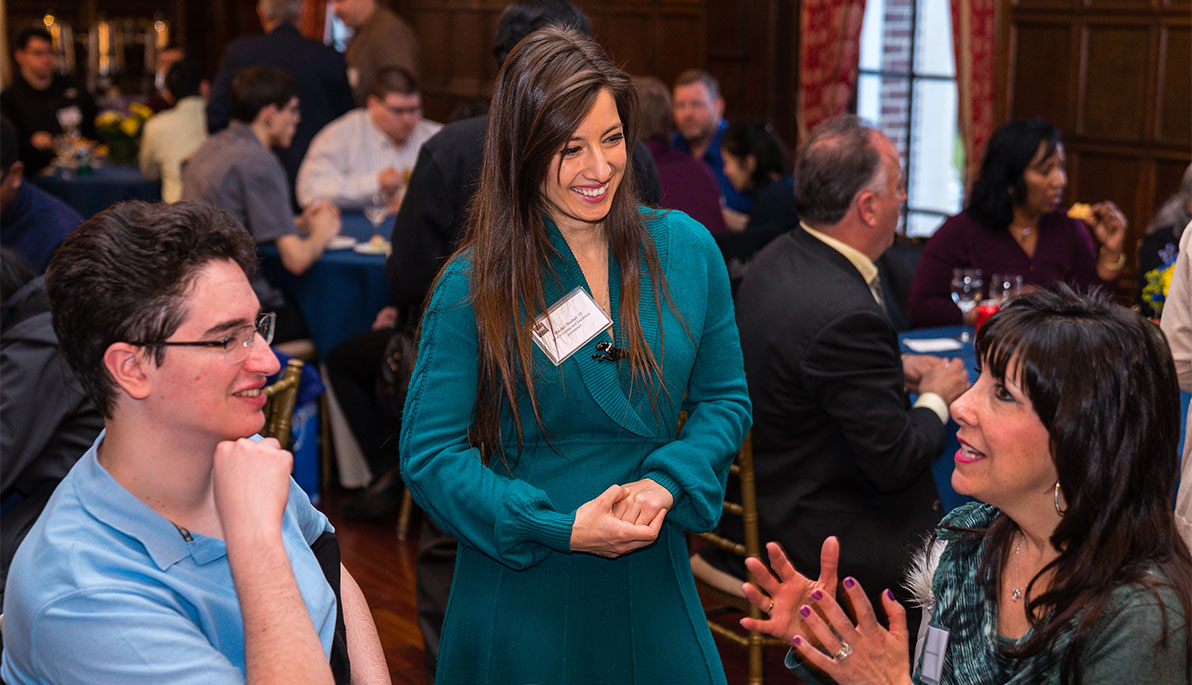 On April 11, as part of the week of activities surrounding the inauguration of NYIT’s fourth president Hank Foley, Ph.D., the NYIT Offices of Admissions and Alumni Relations hosted the third annual Legacy Reception. The event, which took place in NYIT de Sevesky Mansion, celebrates admitted students who have ties to NYIT and invites them and their families to visit the university and meet leadership and other students and alumni. This year’s event also included a special presentation by President Foley, who laid out his plans for the future of NYIT.

“The Legacy Reception is my favorite event,” said Karen Vahey, dean of admissions and financial aid. “It calls alumni back home—this time with their children, grandchildren, brothers, sisters, nieces, nephews, or cousins who are applicants to NYIT.” Twenty-one families with connections to NYIT attended this year’s event.

Recent alumna Maylan Studart (B.F.A. ’18) served as keynote speaker. During her address to the alumni and accepted students, she conveyed the impact that NYIT had on her journalism career.

“I wouldn’t have gotten to where I am today without the hands-on experience I received at NYIT,” she said. “It was the difference-maker to get the internships and to show a portfolio of projects I created. I had the opportunity to make important mistakes to learn from them with the help of my professors.”

After finishing her degree in global and electronic journalism in December 2017, Studart began her professional career at FiOS 1 News for a multimedia journalist position in Binghamton, N.Y., for Fox 40 News WICZ. Just a few months later, she landed her dream job working as a reporter in the New York Stock Exchange for Modern Wall Street.

“You’re the one who makes your NYIT experience,” said Studart. “Explore all other areas outside your major. In this new economy, we should be prepared to change careers a few times in life, so the more different skills you know, the more marketable as an employee you’ll be.”