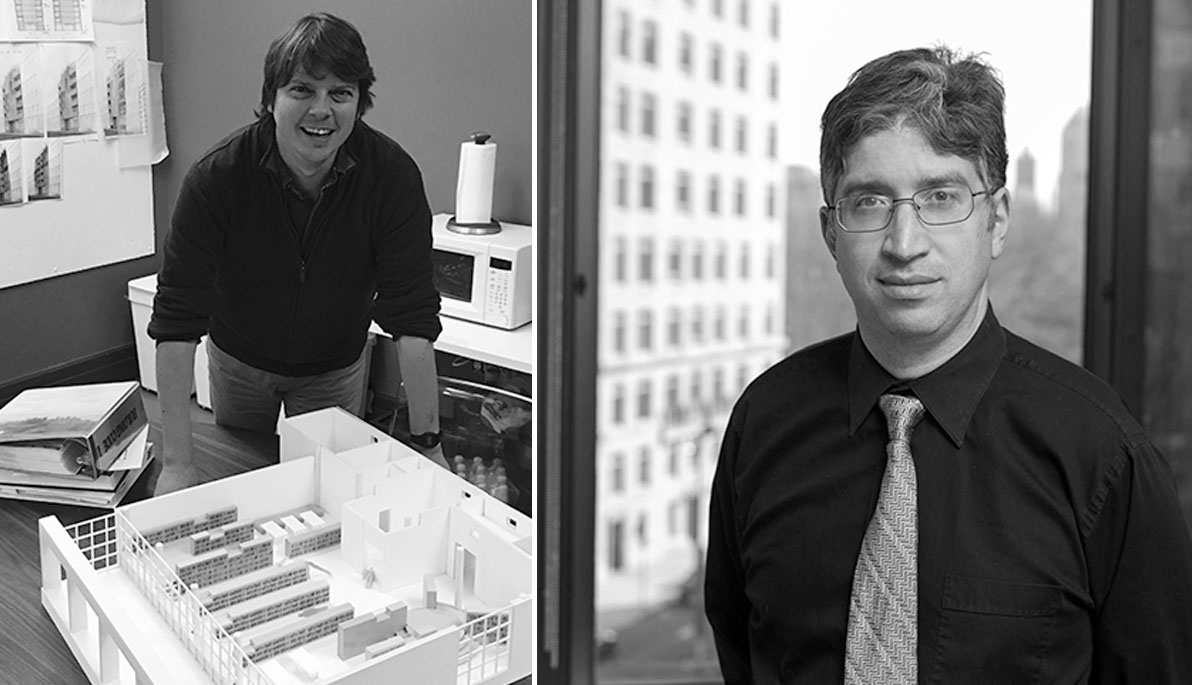 A new must-read book on New York City housing combines the expertise of two NYIT faculty members who used their knowledge of architecture and social sciences to show the impact of urban design on communities. Associate Professors Matthias Altwicker (School of Architecture and Design) and Nicholas Bloom, Ph.D. (College of Arts and Sciences) spoke to The Box about their collaboration on Affordable Housing in New York: The People, Places, and Policies That Transformed a City due out on Nov. 17. The book is co-edited by Bloom and Matthew Lasner, Ph.D., associate professor at Hunter College, and includes an essay by Altwicker. NYIT architecture students Alexander MacVicar, Christopher Alvarez, and Kevin Kawiecki worked with Altwicker to create physical models of affordable housing and floor plans, which were used as visuals throughout the book.

The Box: Why should people read this book?
Bloom: The book features a broad narrative and 37 case studies of real places (Stuyvesant Town, Co-Op City, and more) by many top housing scholars in the country. Lots of great photographs, both new and old, add visual interest for readers. The NYIT models of interior spaces by Matt and architecture students give a sense of why people value these communities, even if the buildings often have unattractive exteriors.

The Box: How did the collaboration happen?
Altwicker: Nick approached me to author one of the book's essays about Eastwood, a large-scale housing project on Roosevelt Island that was originally built as affordable housing. At the same time, he asked me to consider original visual content for both the book and a related exhibition.

The Box: Why do you complement each other as work partners?
Altwicker: Nick and I share many of the same values related to housing and urban design.
Bloom: Matt has a clear vision and meets goals. What more can I ask for?

The Box: What did you learn from collaborating together?
Bloom: I was impressed by Matt's ability to create a visual narrative using the models. The way he designed the scale and finishes helps readers understand how housing changes over time.
Altwicker: The images needed to be an integral part of case study narratives. Our work on the models was greatly assisted by having the text, in draft form, to use as a reference along the way.

The Box: How did you approach creating physical models that could be shown in the book and displayed in an exhibit?
Altwicker: I worked through a number of ideas for the models with Alexander MacVicar, the lead student on the project. The models depict 10 units spanning the last 100 years of affordable housing in New York. The oldest is from 1925, and the latest is from 2013. From start to finish, creating the models took 18 months. They are made of acrylic, which we laser-cut, assembled, and painted. The models needed to be large enough so that visitors to the exhibition could easily compare the sizes of the apartment units, the use and furnishing of the rooms, and the scale of materials from project to project. Although our models are quite large, 3 to 4 feet in length, we kept the color neutral and the furnishings consistent to allow for comparison without the distraction of too much period detail.

The Box: What drives your creative process?
Bloom: The only emotional payoff for me comes in the process of conceptualizing, researching, writing, and revising. When I am not engaged in these activities, I don't feel well. It is not that different from any addiction.

Coming up: The models featured in the book will be included in an exhibit in January 2016 at Hunter College's East Harlem Gallery in New York City. Read more about Affordable Housing in New York: The People, Places, and Policies That Transformed a City.

ABOUT GRANT FUNDING OF THIS BOOK:

Altwicker received an Institutional Support for Research and Creativity grant from NYIT to design and construct the models with architecture students. To write the book, Bloom received external grants from the Ford Foundation/IIE, the New York State Council for the Arts, and the Columbia University Seminar on the City.