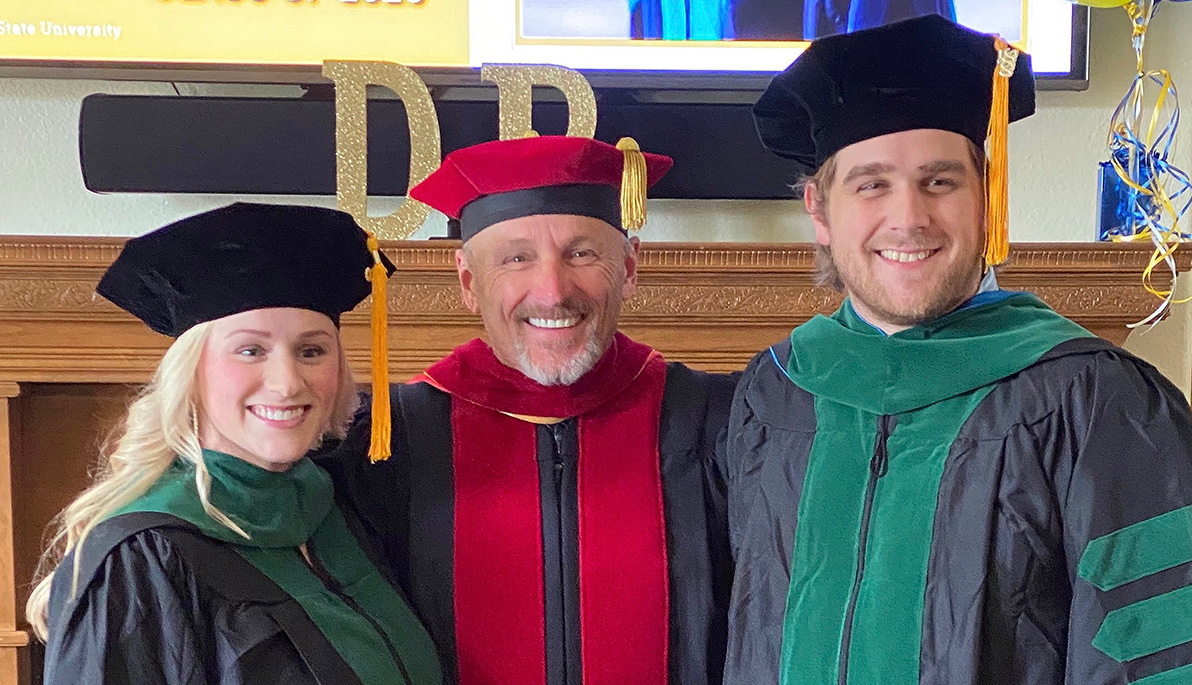 New York Institute of Technology celebrated the commencement of the inaugural class of NYIT College of Osteopathic Medicine-Arkansas on May 21 during a virtual ceremony that recognized the accomplishments of the Class of 2020 and those who led the effort to establish the first osteopathic medical school in the state of Arkansas.

Shane Speights, D.O., site dean of NYITCOM-Arkansas, noted the students entered medical school under unique circumstances as the first class of a new campus and completed their medical degree during a global pandemic.

“Knowing this class, I have no doubt they will be successful and continue to impress us as they join the medical profession in these uncertain times,” Speights said. “I am confident that this very special class is ready, willing, and able to meet the challenges that face them.”

While the graduates were unable to walk across a stage to receive their doctoral hoods, they were still recognized collectively and individually. Each student was encouraged to submit photos of themselves wearing regalia along with a message thanking those who supported their efforts.

“While it’s disappointing that we weren’t able to celebrate together, we understand the circumstances and enjoyed being with our families,” said Hallie Frederick, D.O., a Jonesboro native and member of the NYITCOM-Arkansas Class of 2020.

As Jerry Balentine, D.O., dean of NYITCOM and New York Institute of Technology vice president for health sciences and medical affairs, congratulated the class, he noted how extraordinary it is to graduate from medical school at a time when the world is desperate for those who study disease and practice healing.

“This generation of physicians, your class, our first class in Arkansas, is entering a medical environment that you could not have imagined when you applied to medical school,” Balentine said. “The good news is that you are well prepared to become part of the medical teams that will continue to fight and ultimately defeat this virus.”

Balentine’s message was echoed by New York Tech President Hank Foley, Ph.D., who lauded the graduates’ efforts to pursue a calling that truly impacts lives, particularly in the present status of our country. “You have earned this degree with rigorous education and training,” Foley said. “I dare say you know more facts about the human body than most people know about anything. Armed with this knowledge, your insight and decisions will extend and improve the lives of your patients.”

The ceremony included the recognition of five recipients of the Riland Medal for Public Service, named for NYITCOM founding trustee W. Kenneth Riland, D.O., and presented to those who make significant contributions to the advancement of medical education. Arkansas State University, the City of Jonesboro, St. Bernards Heath Care, NEA Baptist Health System, and Barbara Ross-Lee, D.O., founding dean of NYITCOM-Arkansas, were all honored for their efforts. 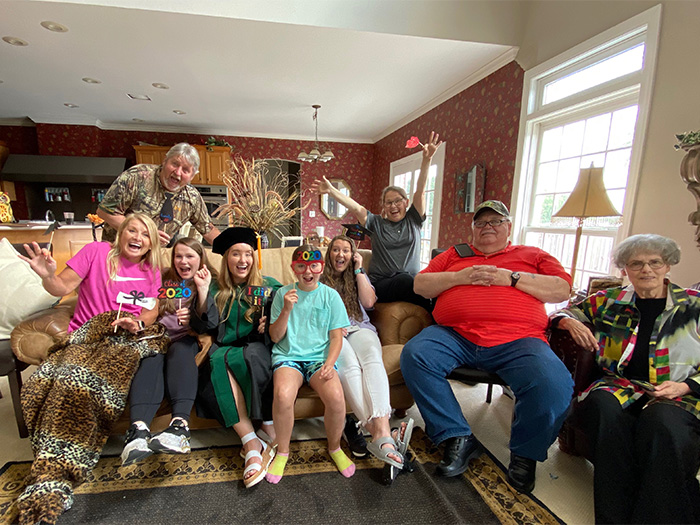 Paige Parnell, D.O., celebrates with her family at their Jonesboro home as her name is called.

Ross-Lee encouraged the graduates to remember those who helped them achieve their dream, urging them to never mistake knowledge for wisdom and reminding them that a tree is known by its fruit. Her final point challenged them to each bear fruit that shows each are worthy of the distinguished honor of being called an osteopathic physician.

Arkansas Governor Asa Hutchinson was also among those delivering prerecorded messages to the graduates, reminding them of NYITCOM-Arkansas’s mission and the opportunity they have to continue to fulfill it.

“The healthcare needs in our state are significant,” Hutchinson said. “Your medical school was founded with a direct mission of training physicians in this region, for this region. We need you here, and I hope each one of you will consider practicing in Arkansas upon completion of your residency.”

The ceremony concluded with a powerful message from Mateusz Gorecki, D.O., president of the Class of 2020. He was a child when his family immigrated to the United States from Poland in 2002. He encouraged his classmates to sincerely pause to thank their family, as his parents’ life-altering decision allowed his dream to become a reality.

“They left their home country and everything they knew behind,” Gorecki said. “They brought me to this beautiful country where I would have more opportunity and through hard work, I could capitalize on my potential. Thank you for your unconditional love and sacrifice. Mom, you wanted me to go to school in America, so I chose the longest possible journey. After finishing my 19th grade today, I am no longer a student. I did it.”

News of the graduation was lauded by major media outlets in the region, including a front-page story in the Jonesboro Sun and a feature in Arkansas Business.