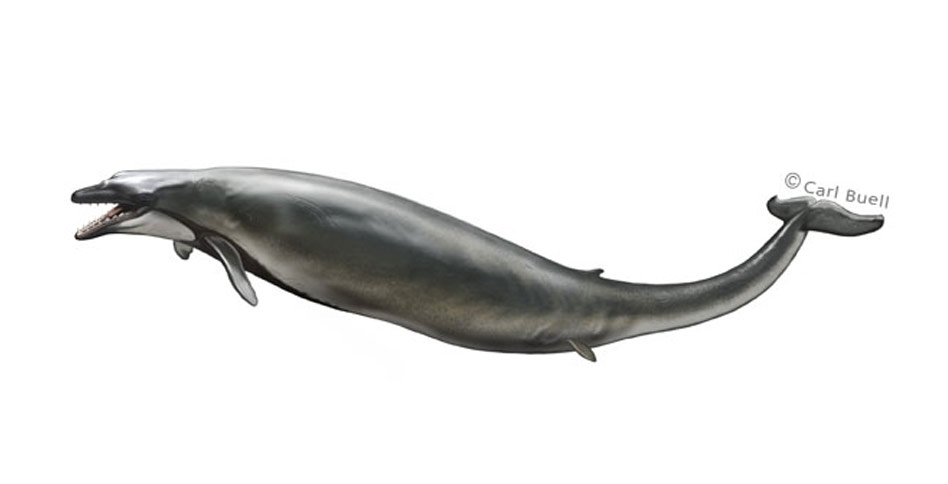 Range: Three species of Basilosaurus are known, and specimens have been discovered in fossil sites in the southeastern United States (Alabama, Arkansas, Florida, Georgia, Louisiana, Mississippi, and Tennessee), England, Egypt, Jordan, and Pakistan, indicating that Basilosaurus inhabited the Northern Atlantic Ocean, Tethys Sea, and the Paratethys Sea (the precursor to the Mediterranean Sea).

Anatomy: Basilosaurus looked vastly different from all modern whales and dolphins. It had an extremely long, slender body, and had a narrow snout lined with teeth of different shapes. Its overall body shape is so unlike those of other whales that it was initially thought to be a marine reptile; hence the name Basilosaurus, which means “king lizard.” The teeth towards the back of the mouth have multiple large serration-like cusps. Although not positioned at the tip of the snout like more primitive whales (e.g. Pakicetus) and most land mammals, the blowhole was still far in front of the eye sockets (in most modern whales and dolphins, the blowhole is positioned between the eyes, or even behind them). Unlike all modern cetaceans, Basilosaurus also retained external hindlimbs with a functional knee and toes. However, unlike earlier, more primitive whales, many of the joints in the ankle and foot are fused and others have limited mobility.

Locomotion: Although Basilosaurus has rudimentary hindlimbs, they were useless for any sort of terrestrial locomotion. The hindlimbs are tiny, and the pelvis lacked any bony connection to the vertebral column (and must have “floated” in the muscles of the belly), indicating that these elements could not support any weight out of water. Well-developed muscle attachments on bones of the hindlimbs suggest that they were functioning (and not completely vestigial), and they have been interpreted as clasper-like structures for mating (vestigial hindlimbs in boa constrictors serve such a purpose). However, it also seems possible that the hindlimbs had no clear function. Once cetacean hindlimbs were no longer needed, it could have taken millions of years before they were lost entirely, with a protracted period of highly reduced hindlimbs. The proportions of the vertebrae at the tip of the tail suggest that Basilosaurus had small tail flukes. This is the oldest whale genus with evidence for flukes, although flukes may have occurred in early whales for which the tail is unknown. Basilosaurus is characterized by extremely elongate vertebrae (three times as long as those in most other basilosaurids, relative to vertebral width), a very high degree of flexibility in the vertebral column, a high number of vertebrae, and an incredibly elongate body form in general. This, in concert with the inferred small flukes in Basilosaurus,indicates that nearly the entire body of Basilosaurus undulated up and down during swimming, unlike modern cetaceans, which primarily use the ‘tail’ region during swimming. This form of locomotion is ‘anguilliform’, or eel-like; in the case of Basilosaurus, this movement would have been up-down, rather than side to side as in eels and other anguilliform fishes. Curiously, the ribs of Basilosaurus are very dense and thickened, which is a specialization that probably allowed it to achieve slight negative buoyancy. If Basilosaurus had positive buoyancy, it would be difficult for it to dive and swim effectively. All this evidence suggests that Basilosaurus was fully marine; additionally, Basilosaurus has only been discovered in marine sedimentary deposits, and oxygen isotope chemistry of its teeth indicate that it lived in saltwater.

Sensory Abilities: Land mammals (including humans) can hear underwater, but they cannot tell which direction the sound comes from because sound waves travel through the bones of the skull and arrive at both inner ears at the same time. Skeletal evidence indicates that Basilosaurus could perceive the direction of origin for underwater sounds. The lower jaw of Basilosaurus has a very large hole (mandibular foramen) with thin walls, which in modern toothed whales houses a large pad. Sound waves passed into the fat pad through the thin bone of the lower jaw and then continued to the middle and inner ear. The tympanic bulla, a bone which forms the floor of the middle ear cavity, was less connected to the rest of the skull as compared to more primitive whales. The reduced connections, plus the development of air-filled sinuses around the middle ear, helped isolate the inner ear from bone-conducted sound waves. By restricting the travel of sound waves to the fat pad, the right ear heard sounds that originated on the right side earlier than those that originated on the left side. Similarly the left ear heard sounds that originated on the left side earlier than those that originated on the right side. Based on the difference in time between the perception of a sound wave in each ear, Basilosaurus could likely determine the direction of origin of incoming sound. Unlike modern cetaceans, the skull of Basilosaurus has bony external ear canals, suggesting that it may have retained some form of highly reduced external ear. However, the rest of Basilosaurus’ hearing adaptations indicate it was fully marine, and thus any retention of adaptations for hearing airborne sound was probably vestigial.

Diet: The skull of Basilosaurus is superficially crocodilian in shape, exhibits large jaw muscle attachment areas, and a fearsome set of teeth with canine-shaped incisors in front, and flattened, serrated triangular ‘molars’ in back. The flattened teeth in the back of the mouth exhibit long, nearly vertical wear facets, indicating that the upper and lower teeth sheared across each other. The teeth in the tip of the snout are roughly similar to those of modern fish-eating toothed whales, although the teeth are extremely robust and deeply rooted. Basilosaurus is one of the few fossil marine mammals for which preserved ‘gut contents’ are known. A skeleton of Basilosaurus cetoides was found from the Eocene of Mississippi with a mass of partially digested fish bones, indicating that Basilosaurus fed on fish. Given the large size of Basilosaurus and the thickness of the crowns and roots of the teeth near the tip of the snout, it may have preyed on other marine mammals, as does the modern killer whale. In Eocene Basilosaurus-bearing fossil sites in Egypt, many fossils of the smaller basilosaurid Dorudon bear large puncture marks, which are potentially caused by the teeth of Basilosaurus.

Uhen, M.D. 2004. Form, function, and anatomy of Dorudon atrox (Mammalia, Cetacea) from the Middle to Late Eocene of Egypt. University of Michigan Papers on Paleontology 34:1-222.