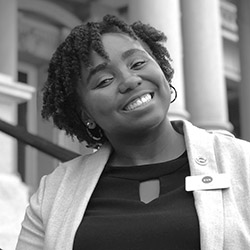 Student Orator Ashley LorIn Dent enrolled in New York Institute of Technology in 2018 as a transfer student. She served in the United States Air Force as an aviation resource manager for nine years, including deployments to Afghanistan and Turkey in support of Operation Enduring Freedom and Operation Inherent Resolve. She was awarded the Air Force Achievement Medal upon separating at the rank of Staff Sergeant. Ashley served as a Sexual Assault and Prevention Response (SAPR) Victim Advocate, supporting and advocating for men and women who had been impacted by sexual trauma. This enabled her to receive the National Organization for Victim Assistance Department of Defense Sexual Assault Advocate certification.

During her time at New York Tech, Ashley’s leadership and academic efforts were recognized by the Student Veterans of America, which nominated her as one of 10 nationwide finalists for its 2019 Student Veteran of the Year award. In the hands-on communication arts curriculum, Ashley helped create and co-host a video series, “Melanin Madness,” which highlighted the struggles brown women face on a day-to-day basis. She also traveled to Europe to produce and star in a documentary that focused on cultural emergence. She held the positions of vice president and president of New York Tech’s Student Veteran’s Organization, focusing on making the student veteran community more inclusive and providing resources to further their success. She also served as president of the Golden Key International Honour Society, an organization of students in the top 15 percent of their class. After graduation, Ashley plans to attend graduate school and hopes to open a non-profit organization that advocates for women who have been impacted by interpersonal violence and women veterans who suffer from combat-related illnesses. 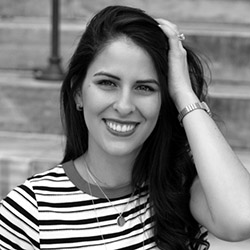 Student Singer Emily Tafur has been singing since the age of four. In her native Colombia, she was a member of the Cali City Choir for 12 years and sang with the Opera of Colombia and the Cali Conservatory. After moving to the United States in 2011 to pursue her undergraduate degree in musical theatre performance, Emily performed extensively as part of LIU’s Post Theatre Company and in Off-Broadway and Long Island theater productions.

She chose to pursue her master’s degree at New York Institute of Technology, channeling her creativity into learning how to edit and produce content for young audiences on modern media platforms. Her work with Globesville, the student-run news channel, included producing, hosting, and editing “ACES,” a show about women's issues, and producing, hosting, writing, and editing a podcast “NYIT International” that can be found on Apple podcasts, Spotify, and Anchor.fm. Emily also traveled to East Africa in the fall of 2019, documenting the trip for Globesville using creative/new media, and hosted a New York Tech admissions video in early 2020.

After graduation, Emily plans to continue her work as a contract Spanish language legal/court interpreter while seeking creative work at a media outlet. She also intends to continue to travel internationally, performing occasionally while expanding on her travel blog, “Globe for Good.”