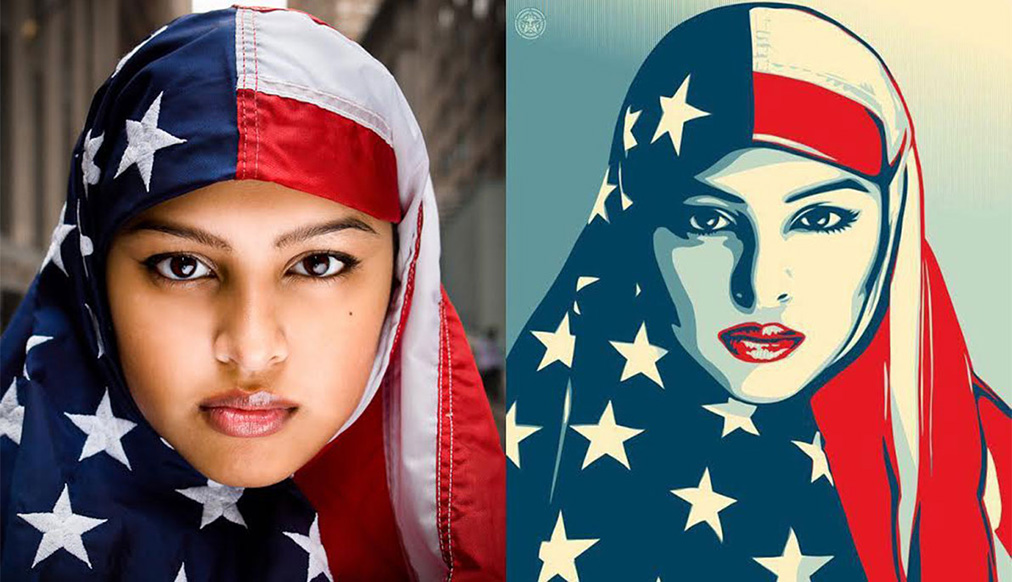 Photos: (Left) "I Am America" Photo by Ridwan Adhami (www.ridwanadhami.com)
(Right) "We The People" Collaboration by Shepard Fairey and Ridwan Adhami for The Amplifier Foundation.

You may have seen Shepard Fairey’s striking illustration showing a woman wearing an American flag as a hijab. But did you know the photograph it is based on has connections to NYIT? “I Am America” was taken ten years ago to commemorate the anniversary of 9/11 by photographer and creative director Ridwan Adhami (B.F.A. ’03). The photo features former NYIT student Munira Ahmed and was taken in response to a rise in anti-Islamic rhetoric. “The American-ness of Muslims in this country was being questioned.” Adhami says. “I thought it was important for the community that I create something that had power and strength to it.”

The photo is just one of the many artworks Adhami has created in an effort to broaden perspectives on Muslims in America and around the world. After graduating and working in the communications and marketing department at NYIT, the photographer/filmmaker took on the role of creative director for the nonprofit organization Islamic Relief USA in 2011. Since then, he has traveled to 19 countries documenting humanitarian crises and development programs that impact Muslim communities. “It’s really fulfilling to be able to use photography, design, and all the skills I’ve built over the years to do some good and tell important stories,” he says. “I have the pictures from my trips hung in my office as a constant reminder of the people I am doing this for. As an artist, to make people feel something, it’s really special.” 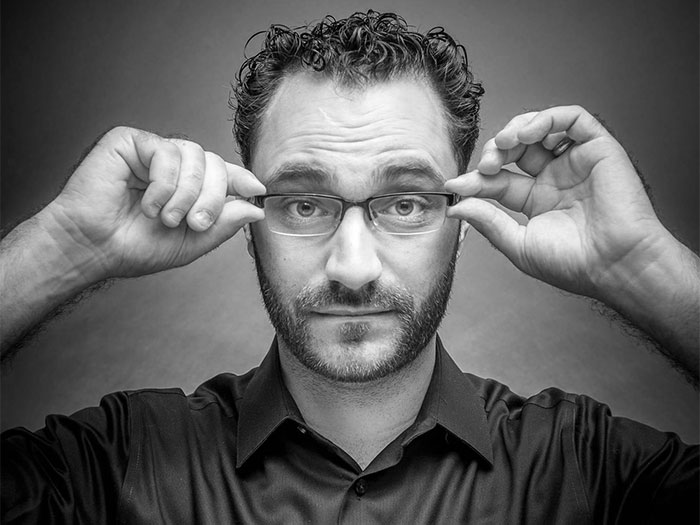 In addition to photography and design work, Adhami has remained active in the music world, which is where he began his career. In February, he is releasing a new music video with Iraqi-Canadian hip-hop artist The Narcicyst centering on the refugee crisis. “The work is not pro or anti anything,” Adhami says. “It’s just making a statement that this is happening right now and these are the people we tend to forget.”

Born and raised in Queens, N.Y., Adhami credits NYIT for helping him to find his voice and style as an artist. “I wasn’t the most traditionally talented artist, but being around those other students helped me find myself and made me realize I tell stories really well. I’m a ‘Concept Guy,’” he says. “In my third and fourth year there were classes I ended up taking twice so I could work on long-form projects. It was really nice to think big and have the support to think big.”

As for “I am America,” which has become his most well-known work, Adhami has mixed feelings about its resurgence in popularity. “It’s nice to know the image resonates with people beyond the original intended audience. There’s a sense of pride in the power of the piece,” he says. “But I also have a sense of disappointment. I’m over this sentiment. I’m over having to make this statement.” He then adds, “That said, if it can offer some sense of solace, if someone can look at it and feel a sense of connection, then it’s doing something positive and that’s all I can hope for.” 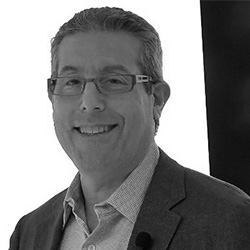