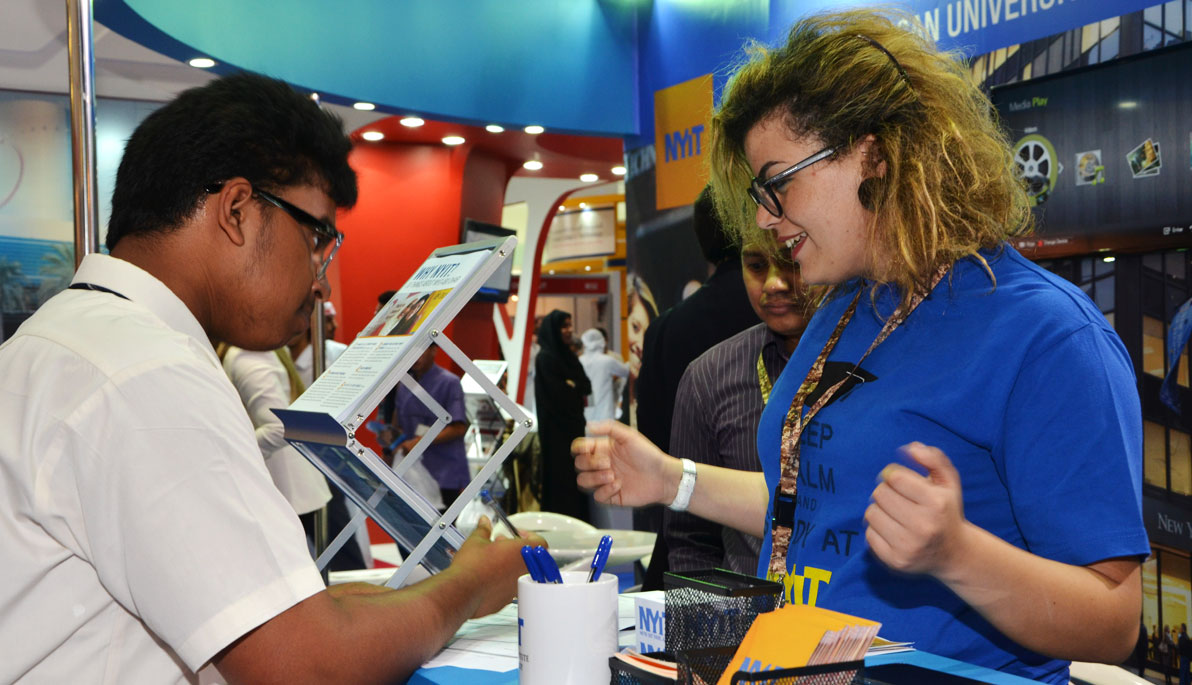 Sarah El Gohary is a woman on the rise at NYIT. As director of marketing and student recruitment at the Abu Dhabi campus, she works tirelessly to tell NYIT's story to prospective students and their parents, business leaders, and media influencers. Her efforts since joining NYIT in 2013 have paid off—new student enrollment in 2014 was up over the previous year. El Gohary was recognized in January at a luncheon for NYIT-Abu Dhabi faculty and staff hosted by Rahmat Shoureshi, Ph.D., provost and vice president for academic affairs, who praised her recruitment initiatives. She talked to The Box about what's new on campus, her career, and learning from her role models.

What are some highlights of your efforts to increase enrollment?

The number of undergraduate and graduate students enrolled in NYIT-Abu Dhabi has significantly increased in the fall 2014 and spring 2015 semesters. We also introduced two new graduate degrees: the Master of Science in Instructional Technology and Master of Science in Information, Network, and Computer Security. Great things are happening here. Thanks to the new leadership and guidance of Ahmad Tabbara, NYIT-Abu Dhabi's executive director, and the determination of all our colleagues, we are heading to the top.

How have you raised brand awareness of NYIT-Abu Dhabi?

Let's just say I'm a walking NYIT advertisement. Everywhere I go I bring up the university and tell people what an amazing place it is. Some specific examples are creating social media channels for NYIT-Abu Dhabi; establishing relationships with the media that led to stories about our campus in Time Out Abu Dhabi, Khaleej Times, Mother of The Nation, TEMPO magazine, and more; visiting more than 50 schools and education fairs in the Middle East; and introducing NYIT-Abu Dhabi to the Business Network International, the world's largest business and professional networking organization with more than 30 members who are business leaders in the United Arab Emirates.

Are there women in your life who inspire you?

Actually one of my NYIT colleagues from New York is a mentor—Patricia Burlaud, Ph.D., dean of operations, assessment, and accreditations for NYIT global programs. Her strength and hard work inspire me. I learn something new from her every time she visits the Abu Dhabi campus. She told me a trick that really works: in times of stress or doubt just look at yourself in the mirror and say out loud, "You can and you will do it." It works!

I also collaborate with a talented group of colleagues at the Abu Dhabi campus. They help to promote NYIT and increase our numbers. Recently my colleague Jaishree Vaidyanathan, who was an executive administrative assistant, became a recruitment officer. Assistant Registrar Annalaine Bautista has also become a recruitment officer and does a great job following up with our leads and inviting them to the campus. We're a power team, and I do my best to pass my knowledge to them. Lutfur Rahman, office assistant for global academic programs at NYIT-Abu Dhabi, is an asset to us and takes care of all preparations before and after going to education fairs. All of this is part of the new recruitment system introduced by Tabbara.

What's your career advice for NYIT students eager to succeed in the workplace?

Love what you do, be genuine, and don't wait for a tap on the shoulder.