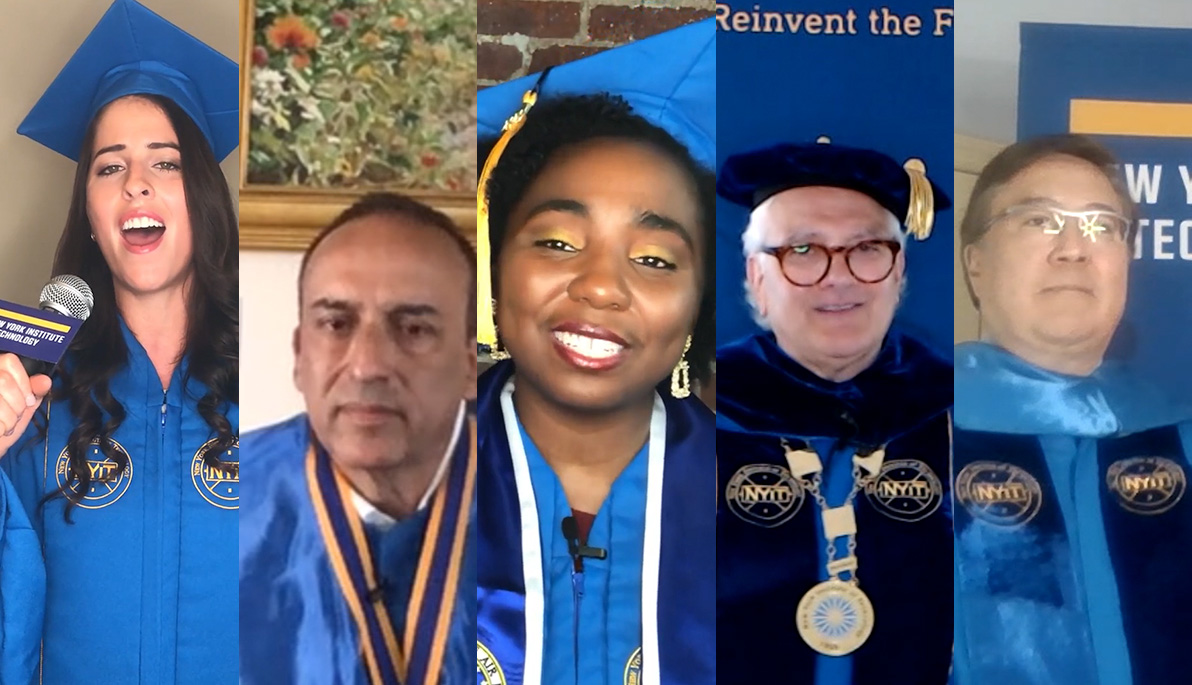 During New York Institute of Technology’s 59th annual commencement on June 21, graduates, families, friends, and New York Tech faculty and staff tuned in to a stream that included celebratory speeches by university administration and this year’s student orator; the conferral of undergraduate, graduate, and doctoral degrees; and individual school and college ceremonies honoring each graduate and recognizing student awards and honors.

The first of two events to honor the Class of 2020, the virtual commencement saluted more than 1,700 candidates for graduation who attended the Long Island, New York City, and online degree programs. New York Tech will also hold an in-person ceremony for the university’s entire Class of 2020 on its Old Westbury, N.Y., campus in May 2021.

With nearly 2,000 unique page views, the stream was viewed by graduates from throughout the United States as well as China, India, Europe, and other international locations. The main ceremony, beginning at 11 a.m. EDT, included speeches and a montage of students that incorporated inspiring messages from government officials including Lt. Governor Kathy Hochul, Senator Chuck Schumer, and Congressman Tom Suozzi.

"The overwhelming majority of you may feel uncertain about your near and longer-term future, and that is understandable, even if we weren’t in the aftermath of a global pandemic. I am confident that your New York Tech education and credentials position you well and that a brighter future is just around the corner for you … and because of you,” Foley told the graduates.

Kevin D. Silva, executive vice president and chief human resources officer for Voya Financial, Inc. and chairperson of the New York Tech Board of Trustees, shared with the graduates: “This new world will be very different than the one that preceded. That old world may never return in the same form. And in that lies new problems to be solved, new opportunities, and new hope!” Silva encouraged the graduates to think about how they will help to be part of that new world, adding, “You can and you will make a difference, and your New York Tech experience has prepared you to make that difference.”

Emily Tafur, who earned a Master of Arts degree in Communications Arts and lives in Islip Terrace, N.Y., sang the national anthem. The Class of 2020 student orator, Ashley Lorin Dent, who lives in Bayonne, N.J., received her Bachelor of Arts degree in Public Relations, Advertising, and Technology. She is a veteran of the United States Air Force and an entrepreneur who plans to attend graduate school.

Dent said to her classmates,“We are the generation of doers, innovators, and teachers. We advocate for those in need. We are entrepreneurs. We don’t think outside the box. We don’t see a box. We have persevered in the face of a global pandemic that has altered how we live in this world for all time and still we have made it to this day: Our graduation! We are exactly who this world needs to right this ship. We can and we will use the gifts we’ve been given at New York Tech and make things grow again.

And when the history of this time is written it will redefine who the greatest generation was. Long believed to be the generation that lived through the great depression and World War II, it will now say it was us.”

Following the completion of the main virtual ceremony, ceremonies for the School of Architecture and Design, College of Arts and Sciences, College of Engineering and Computing Sciences, School of Health Professions, and School of Management included speeches by the deans, recognition of school/college award winners, and slides of each graduate.

Prior to the ceremony, faculty, staff, and alumni who would have sent the graduates off in-person posted well wishes on a virtual wall, and students were provided with printable and digital signs to commemorate their day. Videos of the main ceremony, each school/college ceremony, and the government officials’ full messages are available on-demand at nyit.edu/commencement.