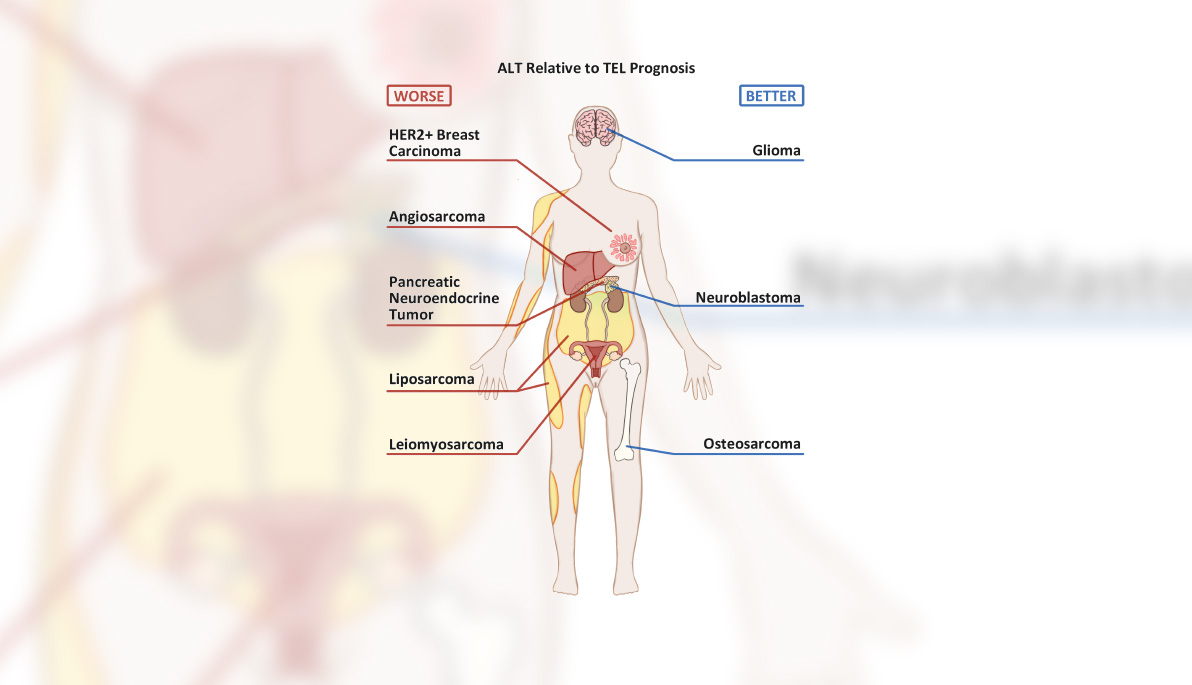 Seven students from the College of Osteopathic Medicine (NYITCOM) helped conduct research that could bring scientists closer to developing more effective, less toxic treatments for some of the world’s deadliest cancers. Their report, published May 14 in the journal Cancers, provides a wide-ranging scientific review of 215 studies on the biological processes that enable certain cancers to spread.

Each strand of DNA has “tails” called telomeres, which serve as protective buffers. As cells age and DNA strands shorten, telomeres take the brunt of this shortening, preventing strands from losing the critical proteins that code for cell growth. When telomeres get too short, healthy cells signal to stop growing or to simply die. Cancer cells, on the other hand, bypass this necessary process by elongating their telomeres and preventing this signal. Many cancer cells lengthen their telomeres by reactivating the enzyme telomerase, but some cancer cells can lengthen their telomeres without this enzyme through a process called alternative lengthening of telomeres (ALT).

ALT cancers account for an estimated 10 to 15 percent of cancer cases, and include some of the deadliest kinds, including glioblastoma, osteosarcoma, and pancreatic neuroendocrine tumors. The only available treatment option for these cancers is chemotherapy, which is known to injure healthy cells and cause unpleasant side effects. Therefore, researching the mechanisms behind ALT is critical to ensuring that safer, more effective treatments are brought to light. While many clinically relevant ALT cancer studies exist, they have never been analyzed in one comprehensive study—until now.

One Goal at a Time

Next up, the team sought to explain how ALT can impact cancer prognosis. In doing so, they came across a big surprise—several papers suggested some breast cancers use ALT to survive. This was surprising because ALT is typically only present in four percent of breast cancer cases. However, ALT may be responsible for the survival of 20 percent of cases that are HER2+, a breast cancer with the protein human epidermal growth factor receptor 2, or HER2. When ALT was present in HER2+ cases, the prognosis was worse. These findings had not yet been discussed in other scientific reviews. The researchers were also surprised to find that osteosarcoma (a bone tumor) uses the ALT pathway 63 percent of the time, while 39 percent of pediatric glioblastoma (a brain tumor) also use the ALT pathway.

“We have therapies designed against telomerase, but none against ALT. With a prevalence of ALT this high, it’s no wonder that telomerase drugs alone don’t work,” said the researchers.

While certain ALT cancers had a worse prognosis than telomerase cancers, the researchers found that several therapy options may serve as viable ALT cancer treatments, including virotherapy. Using biotechnology to convert viruses into therapeutic agents, virotherapies can reprogram viruses to fight disease. Once cancer cells become infected with the newly reprogrammed virus, cells are either genetically corrected or selectively killed. If explored further, this therapy could theoretically be injected into a tumor site to target the ALT-positive tumor cells with no anticipated damage to the neighboring tissue.

The researchers also suggest that co-treating cancer cells with multiple ALT-targeting drugs is another promising, less toxic option to chemotherapy, with more ALT-targeting drugs gaining approval from the U.S. Food and Drug Administration (FDA). Finally, Zhang’s laboratory is pursuing multiple novel ALT targets, including FANCM (mutations that are associated with blood cancers and breast cancers), which they reported in the journal Proceedings of the National Academy of Sciences in 2017.

The process of reviewing scientific literature required students to evaluate findings with a critical eye and interpret the challenging but realistic gray areas that often exist in science and medicine. They realized that most scientific studies, on their own, can’t tell the whole story. Surveying the literature forced students to solve that story for themselves, despite challenging or conflicting scientific findings. Given this, the team met regularly with Plummer, a board-certified pathologist, and Zhang, a seasoned cancer researcher, to pick their brains and determine which findings carried the most weight.

The research experience was also a feather in the cap of aspiring physician-scientist Danny MacKenzie, who served as principal investigator. In 2019, he began working on research with Zhang through NYITCOM’s Academic Medicine Scholars program. Since then, he has helped publish several papers, including a 2020 study on CBD’s potential as an anticancer drug.

“I’m inspired by cancer science, by how cancers manage to evolve so rapidly through manipulating the reigns of natural selection. But more importantly, I’m also inspired by the ingenuity of scientists who battle this powerful force anyway,” says MacKenzie. “It may be hard to believe, but cancer treatments have come a long way over the past 20 years. I’m hopeful that in my lifetime, we’ll develop highly effective treatments, which convert cancer to another manageable chronic disease. When I’m a practicing pediatrician, I hope to be one of the physician-scientists that helped this cause in some way—be it big or small.”