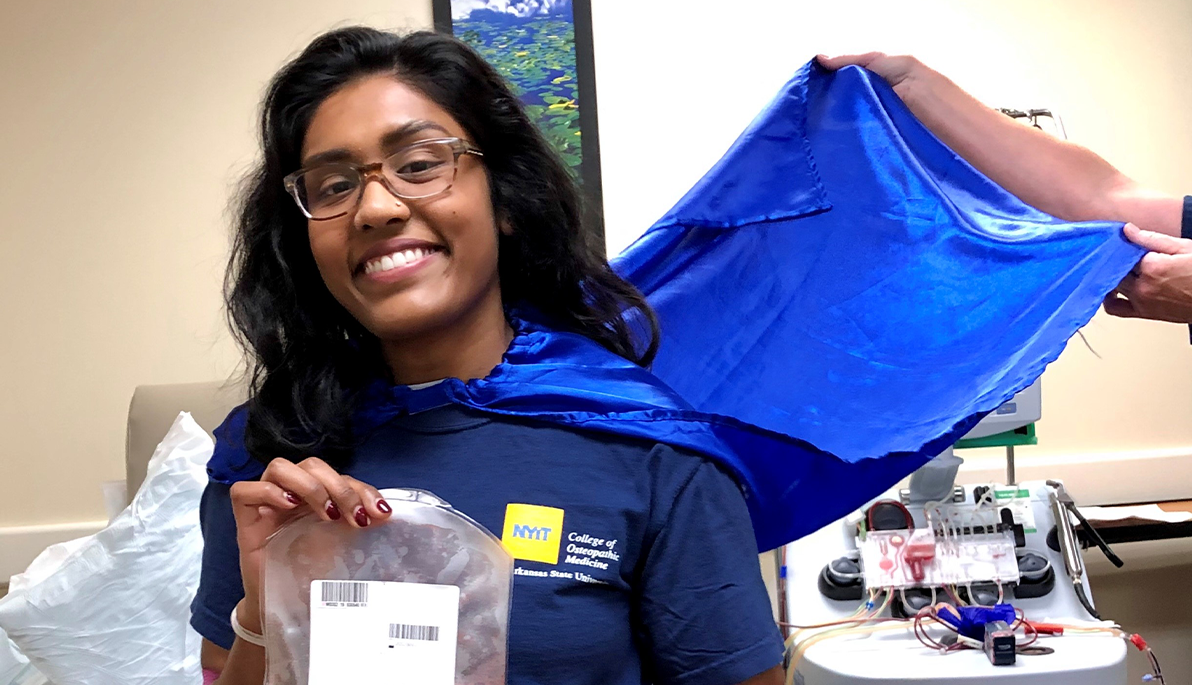 If you ask many medical students why they want to become a physician, their response—in some form or fashion—will often boil down to their desire to help people and make a difference in the lives of others through medicine.

That’s certainly the case for Naima Masud, OMS III at NYITCOM-Arkansas. When she received a unique opportunity to impact a life late last year, she humbly pursued it.

While completing her undergraduate work at the University of Texas in 2014, Masud inconspicuously registered with Be The Match, an organization operated by the National Marrow Donor Program.

“I was walking to class one day, and there was a booth on campus where people were asking people to sign up for the program,” Masud said. “They swabbed the inside of my cheek and took my personal information. I didn’t think much of it at the time. It’s one of those things you sign up for and never expect to hear from them.”

About five years later, Masud did hear back from Be The Match. She received both an email and a phone call informing her that she matched with someone who was in need of a peripheral stem cell donation. Masud was one of 10 potential matches who were identified. She, along with the other potential donors, was asked to visit a LabCorp location to give blood. Medical professionals studied the human leukocyte antigen (HLA) genes to determine which of the 10 potential donors was the best match. Masud soon received another phone call, this time telling her that she was the best fit from the group and asking her to move forward.

“It was an easy decision for me to agree to donate,” Masud said. “I did a lot of research about potential side effects, and they were very minimal. I thought about how much I could potentially help someone, and I was happy to do so.” 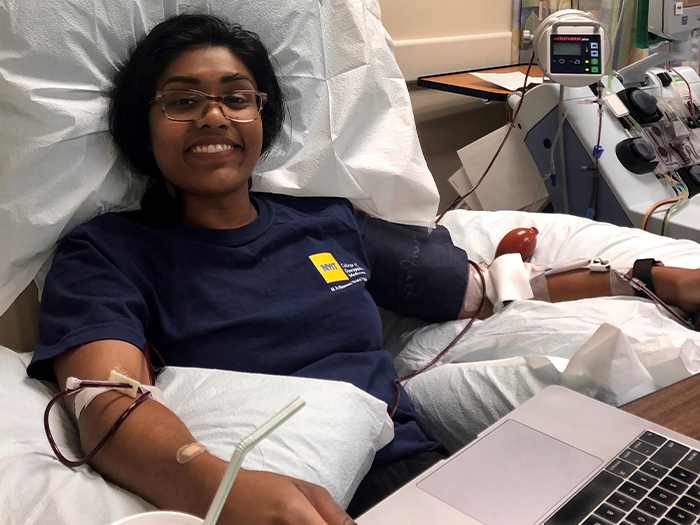 Agreeing to donate her stem cells was an easy decision for Naima Masud to make. “I thought about how much I could potentially help someone, and I was happy to do so.”

The recipient of Masud’s donation was a woman in her 40s who was battling acute myelogenous leukemia. While leukemia treatment often requires a bone marrow donation, Masud gave peripheral stem cells, which is a much less invasive way to get the same cells that come from bone marrow.

Masud received injections of filgrastim, a drug that helps to increase the number of blood-forming cells in the donor’s bloodstream. The drug stimulates the body to produce more peripheral blood stems cells (PBSC), so the donor has more of those cells circulating in their body. A few days later, the blood is drawn from the donor’s arm, just like a routine blood donation. The stem cells are filtered out, and the blood is replaced.

“Bone marrow extraction can be very painful, so PBSC donation is a much easier way to donate cells that essentially perform the same function as bone marrow,” Masud said. “I had some fatigue and a little bone pain while I was receiving the injections, but the side effects were pretty minor.”

Masud currently resides in Rogers, Ark., where she is performing her third-year clinical rotations as part of her medical education. She received the filgrastim injections at a clinic in Rogers and then traveled to Dallas, Texas, to have the stem cells collected from her blood. She spent approximately three hours attached to an IV for her donation and remained in the Dallas area the next day while doctors ensured the collection was successful. A few days later, she traveled back to Arkansas to return to her rotations.

“I had few days to recover before I returned to the clinic, and I’m grateful for that time,” Masud said. “[NYITCOM-Arkansas Regional Clinical Site Administrator] Colleen Hendren was really accommodating with my schedule, and I appreciate how much help she was through the whole process.”

Masud plans to specialize in pediatrics upon her completion of medical school. She always had a strong interest in human development, and looks forward to the opportunity to help young people in any way possible, just like she did for a stranger who was in need of Masud’s assistance.

“I hope I was able to make a difference in this person’s life,” Masud said. “It really didn’t take much effort on my part, but I know my donation can potentially have a tremendous impact on her. I feel honored that I was in a position to help.”