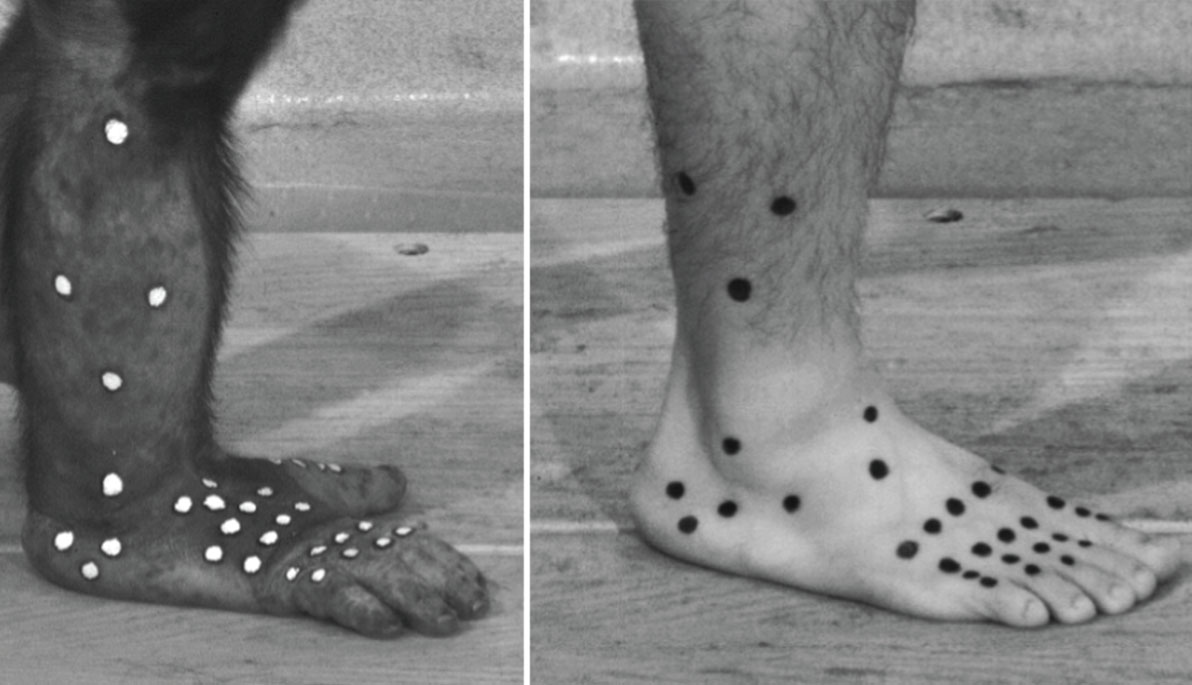 Scientists know that bipedalism—the ability to walk on two feet—was one of the first attributes to develop in early hominins (humans and all of our fossil human relatives). While fossil evidence shows our ancestors may have begun walking upright as early as six or seven million years ago, exactly why and when, and exactly how they would have walked remain a mystery.

Nathan Thompson, Ph.D., assistant professor of anatomy at NYIT College of Osteopathic Medicine, is attempting to answer those questions through research comparing the biomechanics of chimpanzee and human walking. “By comparing how chimpanzees move on two legs to humans, we’re more able to identify snippets in time where certain things in humans evolved to become more efficient,” he says of his research team.

According to Thompson, modern chimpanzees occasionally walk upright but their skeletons are not adapted for regularly walking on two legs. Thompson’s previous research investigated whether the chimpanzee’s rigid torso limited their ability to walk on two legs. He said that the rigid torso may not be to blame, but that the principal difference between human and chimpanzee bipedalism is that chimps swing their pelvis more.

“Only when our early ancestors were able to reduce this hip rotation were their upper bodies able to play a human-like role in promoting efficient bipedal walking,” says Thompson of his research that was published in Nature Communications in 2015. His findings changed the evolutionary view of how early human ancestors walked and what they were able to do.

A new study published in the Journal of Human Evolution  challenges the long-accepted notion that the human foot evolved to be a rigid level during two-legged walking. 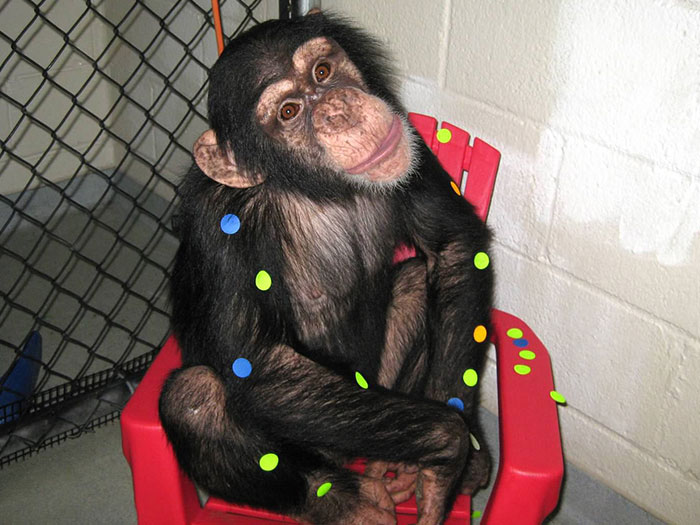 The researchers used dots to represent the positions of different bones in the body. Here, Hercules is getting used to wearing his set of dots.

Fossil feet of early humans are nearly always compared with chimpanzees, making foot biomechanics integral to understanding how human walking evolved. Chimpanzees and other primates have very flexible feet and big toes that are like thumbs, which are useful for climbing. Humans have lost this, and instead our feet have been thought to be rigid, potentially good for forcefully pushing off the ground while walking. Despite their apparent rigidity, Thompson says that human feet’s bones actually move a lot while walking, even more than chimpanzees. “Chimps don’t have that,” he says. “Many researchers studying human fossils have focused on whether the foot was rigid or mobile but it’s actually not about that, it’s about when the spring-like motions in the foot were present.”

Thompson’s research began in 2010 as a doctoral student in anatomical sciences at Stony Brook University, where he was part of a research team that spent six years studying the movements of three chimpanzee subjects and collecting data that can be compared to human movement.

A chimpanzee walking on two feet.

“Working with chimps was an incredibly unique experience,” says Thompson, who came to the project with undergraduate degrees in structural engineering and anthropology. “We’ve created a digital model of walking, and validated it with real movement data from chimpanzees. Now we can figure out how bones and ligaments and muscles move,” he explains. “When you look back in the fossil record, some aspects of the very early fossil humans look similar to chimps, so by looking at chimpanzees we were trying to figure out what aspects of human walking are unique, as well as how some of our early ancestors walked in terms of the biomechanics.”

While the torso research was the subject of Thompson’s doctoral dissertation, he says the data collected will fuel research for him and his colleagues well in to the future. Thompson is currently focusing on regions of the body that have shown significant fossil change, including the inner ear. “There are some weird changes in tiny organs in the inner ear that might have significant effects on how you sense your environment,” he explains.

“When you walk, your body moves up and down a lot. You never notice it because your inner ear is telling your body that it’s moving and your eye corrects for this. Potentially, the size and shape of the inner ear changed depending on how hominins moved around.” Thompson’s goal is to correlate inner ear shape to the type of locomotion used to help determine when bipedal walking emerged.

“Every culture throughout human history has an origin story,” says Thompson. “What’s really amazing about this research is that it directly informs on our origin story; we’re interpreting the fossils of our long-ago ancestors and figuring out how they lived and interacted with their environment. The research shows us how much we have still to learn about our closest ancestors.”