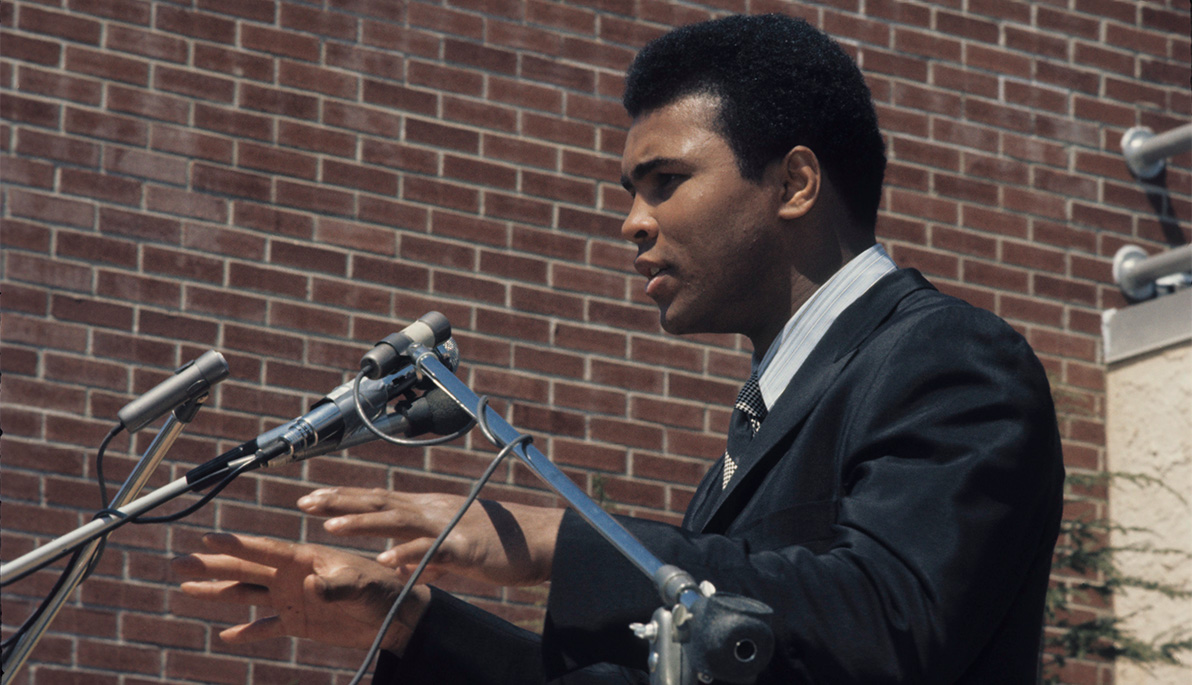 Imagine being a young college student and spending time with one of the greatest athletes of all time—Muhammad Ali.

“It was a very controversial move to have him come to the school at that time. I do remember there were quite a few who were not happy about it because of his anti-Vietnam stance,” recalls D’Attoma, who was then president of the Student Government Association (SGA). “I was proud of New York Tech bringing him in.”

“He was mercurial. He was sharp. He was funny,” says Brodsky, who was the photographer for the school’s newspaper The Campus Slate. “He was bantering with the students responding to questions. He was really commanding everything with an electrifying presence.”

D’Attoma remembers when he and a few members of the SGA rode in the limousine with Ali to the Old Westbury Tavern for lunch. “He was just an effervescent kind of guy,” says D’Attoma. “Friendly, outgoing, and not impacted by what he’d been through prior to being acquitted.”

On April 28, 1967, during the Vietnam War, 25-year-old Ali was drafted into the United States Army. He refused by submitting this statement: “It is in the light of my consciousness as a Muslim minister and my own personal convictions that I take my stand in rejecting the call to be inducted … I find I cannot be true to my beliefs in my religion by accepting such a call…”

Shortly after, he was stripped of his boxing license and on June 20, 1967, Ali was convicted of evading the draft. He was sentenced to five years in prison, a $10,000 fine, and banned from boxing for three years. During his suspension, Ali spoke to various colleges to make ends meet, one of them being New York Tech.

D’Attoma emphasizes that Ali was not well-liked because of his position on the Vietnam War, saying, “There were a couple of protestors at the event.”

D’Attoma, who is the Midwest regional manager at Broken Shed Vodka LLC, and co-founder of the non-profit Sacred-Sexually Abused Children’s Relief Endeavor, says Ali left a long-lasting impression on him.

“The impression he made upon me was that you had to fight for your rights. It’s incumbent upon us to fight for our rights if they’re being taken away. And, you see that, in 50 years, that hasn’t changed much,” says D’Attoma. “We still see rights being squashed and taken away. And I don’t mean fight physically. And that’s the lesson that he was able to amplify over the years.”

Adds Brodsky, “I will always carry the experience with me. In the late ’60s, early ’70s, there was a lot of activity on college campuses, protesting the draft for the Vietnam war. It took a lot of courage for him to take the stance [and] that he didn’t give up.”