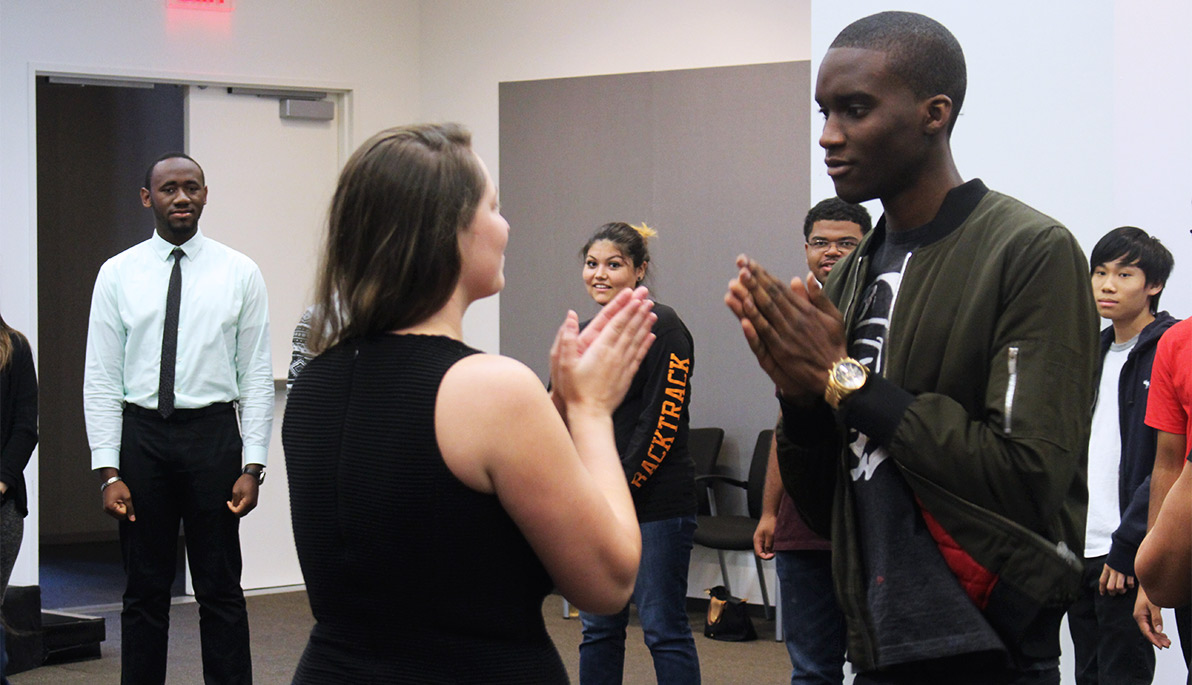 This election year, emotions have been running high. And when it comes to conversations about politics, it’s not always easy to keep feelings in check. So what is the best way to discuss the election with someone with opposing views? And how do you engage someone who is apathetic towards voting?

NYIT students (some of whom are eligible to vote for the first time this year) explored the answers to those questions and more at several events focusing on politics, voting, and the election, offered through the initiative #NYITVotes2016.

At the workshops Talking Politics and Voter Registration Training, both held in September, Marian Rich, owner of consulting firm Career Play, used improvisation and role playing exercises to show students how to listen and have open discussions about politics.

“I think the learning tools of improvisation help students learn how we typically listen and converse,” said Rich. “We tend to listen to ourselves more when we speak instead of being fully present. We think about what we’re going to say and do not respond to what the other person is saying. Listening and conversing skills become much more vital because conversations can become contentious if we don’t listen to the other’s point of view.”

In addition to learning how to speak to others about politics in a non-hostile way, students also gained a better understanding of the election process as a whole and how they can get involved.

“I learned that sometimes not all students are keen on registering to vote, especially if they do not like either of the candidates,” said Krishan Wanarajan, a graduate student majoring in computer science, who attended both workshops. At the Voter Registration Training workshop, he along with other students, learned methods for getting reluctant citizens to register to vote. “We need to give reasons why it is important for students to vote, and also get a better understanding of their position.”

Voting and the elections weren’t the only topics addressed during the #NYITVotes2016 initiative. At the workshop NYC Youth Convention—Developing a Student Voter Platform, held at NYIT-Manhattan on September 27, more than 40 students from NYIT worked in teams to identify platforms that spoke to their interests and learned how to move them through the political process.

Wilbur Childs, youth voter coordinator, and Sean O’Leary, field coordinator/analyst, both from NYC Votes, led the workshop. (NYC Votes is the voter engagement campaign of the NYC Campaign Finance Board.) They divided the students into teams and discussed topics including what it means to create a political platform, how ideas and legislation flow through the different levels of government, and how legislative agendas can affect their lives.

At the end of the workshop, which was held in partnership with NYC Votes, each team presented a platform and methods for moving their platform through the political process. Later, the students who attended were invited to The Red, White and Blue Bash, held that evening at Lincoln Center. There, they had the opportunity to present their platform to the public and mingle with politicians, musicians, celebrities, and community members.

Freshman and biology major Gianna D'Aloia, who attended several of the workshops, said she learned that she truly can make difference. “First we learned WHY your vote matters. Then, this workshop took that a step further and showed how you can take action, make a difference, and utilize your voice.”

This semester, with the presidential election on the horizon, NYIT is organizing a number of initiatives around politics, the election, and voting, through #NYITVotes2016. The university partnered with both TurboVote, a platform that works to simplify the voting process, and All In Campus Democracy Challenge, which improves student engagement in the democratic process. Amy Bravo, senior director of International and Experiential Education at NYIT, who led the #NYITVotes2016 initiative, noted that “to date we have had 195 students sign up through TurboVote, 108 people register via hardcopy registration forms, nine voter engagement events, and 531 students attend the events.” And election day is still one month away, so those numbers are only expected to go up.

Join other members of the NYIT community and get involved. Sign up to receive election reminders, learn for ways how you can get out the vote, register, and more: nyit.turbovote.org. For more information, email Amy Bravo.