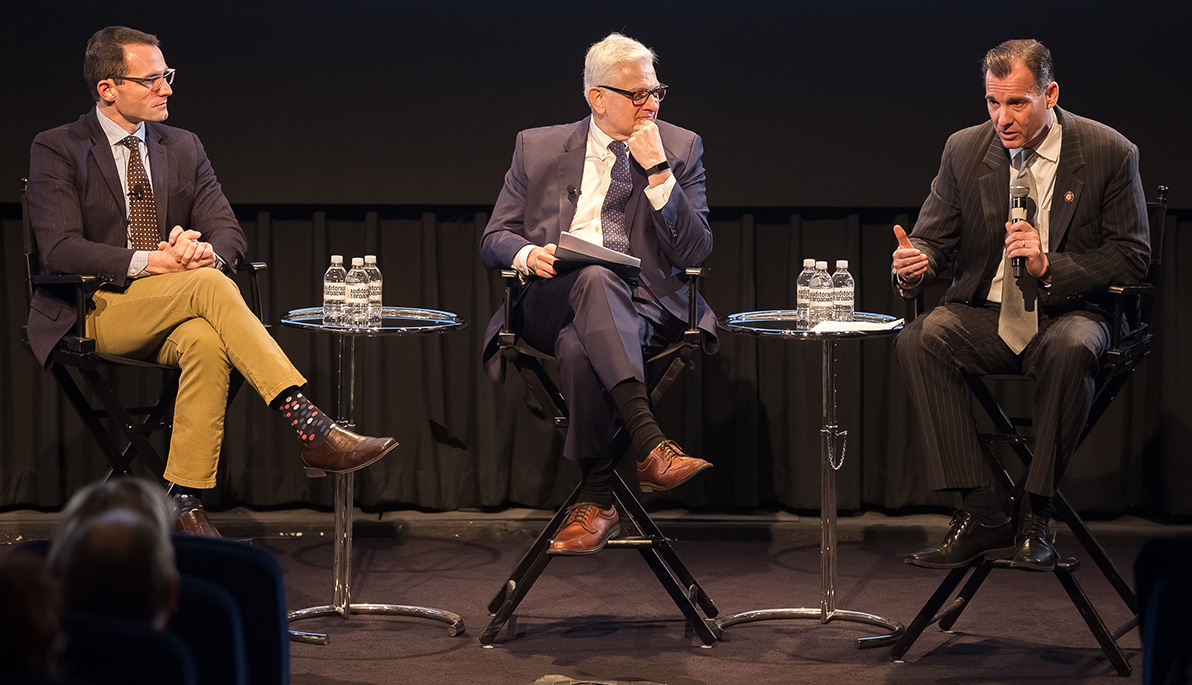 On March 5, Assistant Secretary of the Air Force for Technology, Acquisition, and Logistics Will Roper, Ph.D., and U.S. Congressman Thomas Suozzi (New York District 3) joined New York Institute of Technology President Hank Foley, Ph.D., for the university’s inaugural 21st-Century Leaders Conversation Series at the NYIT-Auditorium on Broadway. Roper and Suozzi spoke about their careers, the impact of technology, and the ways that government and the private sector can collaborate on future technological innovation.

NYIT’s new speaker series was created “to bring high-profile people here to New York Institute of Technology so they could share their career experiences, life journeys, their vision of the future,” said Foley, who moderated the discussion.

Roper—who heads up the U.S. Air Force’s research, development, and acquisitions managing a budget of more than $40 billion—decided to pursue a career in STEM after reading A Brief History of Time by Stephen Hawking. This led to a fascination with string theory—a unified theory that attempts to explain the machinations of the universe. “Beautiful ideas have always been captivating to me,” he said. However, he pursued a career in the defense industry because he “needed to find a place where I could plant myself and grow.”

Roper also talked about the inaugural Air Force Pitch Day held from March 6 through 7 that is modeled after commercial investment competitions. It will award up to $40 million to startups and small businesses using Air Force credit card payments. The event is intended to help address challenges that the U.S. government currently in developing new technologies in the 21st century.

“We’re still using the Cold War model of building systems and engaging with industry,” he said. This was a time when the government often dictated the progress of technological innovation. “The thing that’s really different now than the last century is looking at all of the technology change that happens today.”

While it is exciting that there is “no dearth of technology options,” Roper adds that the concern for national defense experts is that new technologies developed are available to nearly every nation, including others not bound by ethics and policies of the U.S. government, which leads to an uneven playing field.

“We’ve got to speed up how quickly we build things,” Roper said, particularly in the areas of artificial intelligence, quantum systems, synthetic biology, and nano-systems, all of which he described as a “deck of wild cards.”

“You have to be able to move more quickly,” agreed Suozzi. “And that’s not going to happen because people are working harder, it’s going to require new procedures, processes, systems, and exceptions.”

Strategic adversaries such as China, Suozzi added, that do not follow democratic policies can advance technologies faster than the U.S. “The world is dramatically different today that it was 10 years ago, and we need smart people of good will to work together and come up with solutions to solve the problems,” he said.

Since Pitch Day will award contracts using a government credit card, “the Air Force has now called up what we can all do in our personal lives,” Roper said. “But it has huge implications for us because we can move at the speed of need for small businesses. We need an open door for anyone who has a good idea and has a willingness to work with us, at a speed that shows that we care about the needs of their business.”

Suozzi described his vision for the future of Long Island, one closely tied to its past. The region has often been called the cradle of aviation with milestones that include Charles Lindbergh’s historic 1927 transatlantic flight from Roosevelt Field to Grumman’s construction of the lunar module.

His idea for the next small step in Long Island aviation history? “I want to build a rocket,” he announced, citing the work of entrepreneur Max Haot, CEO of Brooklyn-based Launcher, which is currently testing rocket engines in Calverton, N.Y. “We can stop thinking about the cradle of aviation of yesterday and start thinking about the future.”

“NYIT is about halfway between Brooklyn and Brookhaven, and we want to play an ever-increasing role in that vision,” added Foley.

A Q&A session invited both speakers to discuss their views on artificial intelligence, synthetic biology, and the impact of technologies in general.

Noting that society can’t be a salmon swimming against the stream of progress, Roper said: “We’ve got to live in this world, where we have increasingly impressive technological tools in our hands that also come with impressive responsibility.”