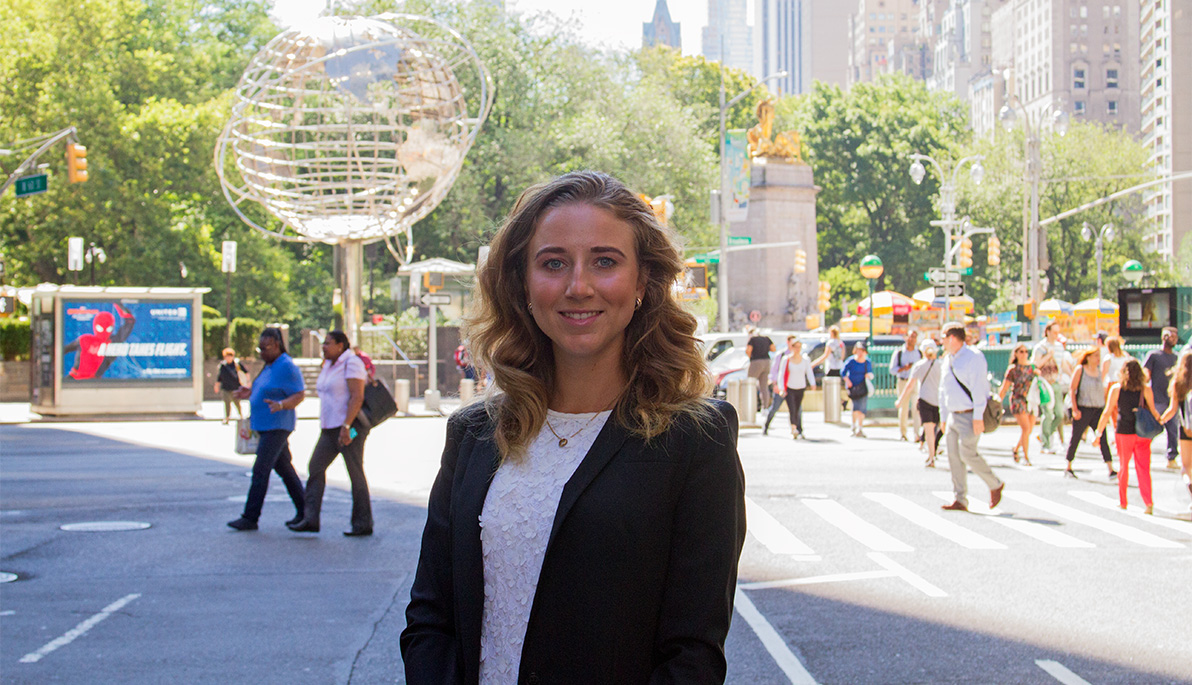 Finance M.B.A. student Nataliya Naumova (Class of 2020) grabbed a career-boosting opportunity recently, presenting original research in a program at Bloomberg headquarters in New York City. She gave a five-minute “lightning talk” in the Bloomberg Quant (BBQ) seminar series on June 26, where she shared the podium with a Nobel laureate and addressed an audience of finance and investment professionals, academics, and Ph.D. students.

The Bloomberg Quant seminars are held quarterly and cover a wide range of topics in quantitative finance. At her first BBQ event in March, Naumova met the head of Quantitative Research at Bloomberg LP, Bruno Dupire. An ambitious student, she asked him how she might participate in the lightning talks. To her surprise and delight, he invited Naumova to present one of her research projects. 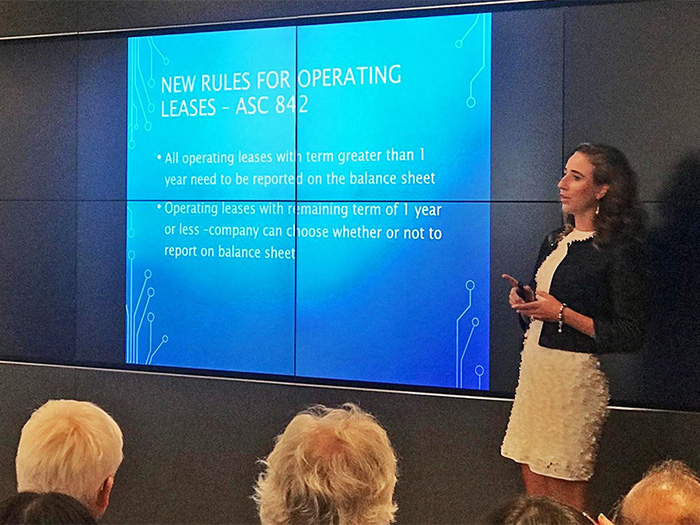 In a “lightning talk” at the Bloomberg Quant seminar series, M.B.A. student Nataliya Naumova presents her original research on new FASB rules and their effect on companies.

“I could not let this opportunity go!” said Naumova. With guidance from Professor Steven Shapiro, Ph.D., and Professor Peter Harris, she prepared a project that describes the potential impact of new Financial Accounting Standards Board (FASB) rules that will require companies to record operating leases on their balance sheets.

Shapiro explained, “For a company, leases can be a significant liability, like debt and loans, except that until now, they did not appear on company balance sheets. Nataliya waded through data she downloaded at the Bloomberg Terminal [an online system that provides news, data, and trading tools] in the School of Management’s Voya Financial Technology Center to find out leasing activities of 15 publicly traded companies. She constructed a new balance sheet for each company with their operating leases recorded as required by the new FASB rules. Her sample demonstrates that a higher degree of financial leverage—that is, debt—becomes visible under the new rules.”

Naumova, who will graduate in December, presented to a standing-room-only crowd and afterward was overwhelmed by listeners who complimented her project. “I had many people asking me if I was a professor,” she said. “That made me feel a little bit proud of the research and of being a part of NYIT, because it shows that it was done at a high level—thanks to the major help of Dr. Shapiro and Professor Harris. I would not have been able to participate in this event without so much help from such excellent professors.”