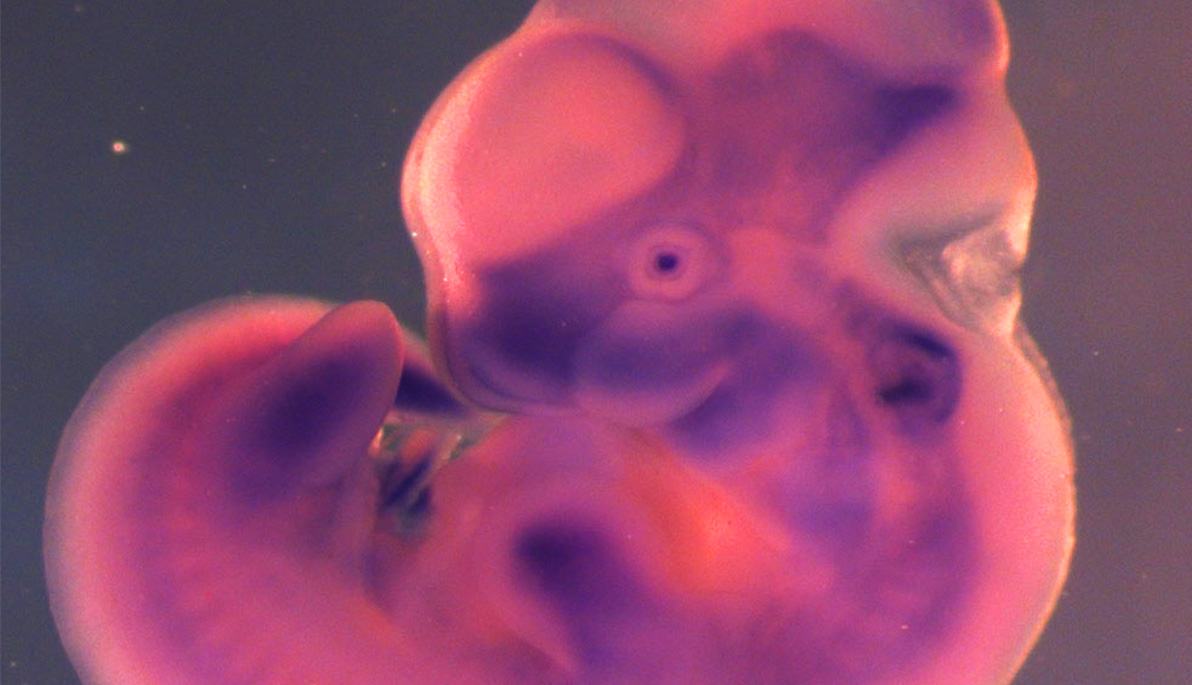 Photo: Mustn1 expression in the musculoskeletal system of a developing mouse (embryonic day 11.5). The protein (denoted in purple) is found in the fore and hind limbs, branchial arches, frontonasal process, somites, and posterior tail bud.

Michael Hadjiargyrou, Ph.D., professor at NYIT College of Arts and Sciences, has spent much of his career researching skeletal repair on the molecular and cellular level. And now his bone-breaking work has paid off: He has been awarded a $442,000 grant from the Eunice Kennedy Shriver National Institute of Child Health and Human Development of the National Institutes of Health (NIH) to pursue research into Mustn1, a gene critical in the formation and healing of bones.

Hadjiargyrou discovered the protein Mustn1 in 2004. It is part of a new family of proteins, Musculoskeletal Temporally Activated Novel Gene (MUSTANG). Studying Mustn1 is the first step toward understanding a protein family that is vital to the growth of cartilage and bone.

With this grant, Hadjiargyrou can take his research to the next level. His goal is to find out the gene’s exact significance during bone development and regeneration by analyzing various conditions with and without it.

The research involves identifying and elucidating genes activated during the repair of a fractured bone in order to address a major challenge in orthopedic medicine: how to stimulate cartilage and bone regeneration necessary for skeletal trauma and diseases. “We’ve worked with several genes we consider to be important in the regeneration process,” explained Hadjiargyrou. Understanding how Mustn1 works will be a big part of that effort.

Hadjiargyrou and his team, which includes NYIT students, will work with genetically altered mice where Mustn1 is deleted at various stages of development. Experiments with these mice—which are known as knockout (KO) mice—constitute the gold standard in gene/protein function analysis.

With KO mice, researchers can contrast a control group (which have all genes) with an experimental group (which lack one specific gene) at any stage of development. The process of “knocking out” a gene at various stages and observing the effects on the KO mice can provide clear evidence of the gene’s function and importance. Using KO mice will enable the team to establish conclusively that Mustn1 is a key regulator in cartilage cells and is necessary for cartilage formation during embryonic development and also fracture repair.

“We all know people who have suffered from fractures, arthritis, or other joint or bone injuries,” said Hadjiargyrou. “This research into the genomics of bone healing could lead, eventually, to new gene-based therapies.”