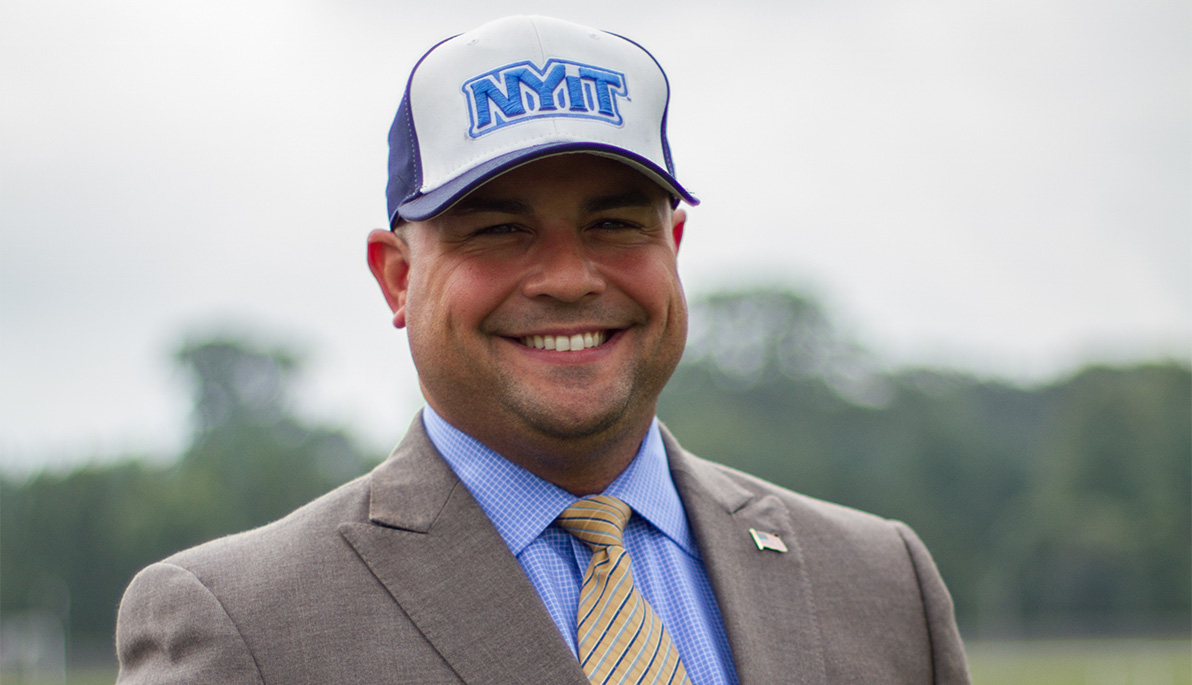 NYIT has a new director of intercollegiate athletics and recreation. At a press conference that included student-athletes, NYIT President Hank Foley announced that, following an extensive national search, Dan Vélez has been appointed to the new role, effective September 1. Before making the announcement, President Foley built up the excitement by leading the crowd in a “We are NYIT” cheer.

“Dan beat out quite a field of people for this position,” Foley said, noting that no other candidate could match the vision and strategic fit that Vélez offers. “Elevating and enhancing our athletics program is an institutional priority, as we recognize how important athletics is to our community, students, alumni, and beyond. We’re going to work really hard to try to make athletics a jewel in the NYIT crown.”

NYIT student-athletes also continue to excel academically. In the 2016–2017 school year, they achieved an average GPA of 3.21, outperforming the general student body, with 125 students achieving a GPA of at least 3.25, which earned them spots on the ECC Commissioner’s Honor Roll.

“I am honored and thrilled to have been chosen as the director of intercollegiate athletics and recreation at NYIT. Today marks the realization of a dream for me personally, and is just the beginning of what will be a wonderful journey,” said Vélez. “President Foley has outlined a vision that is easy to get behind, and I look forward to working with the NYIT community to reach unparalleled success for the Bears. Most importantly, I am eager to work with our athletic staff members to ensure we are providing the tools needed for NYIT student-athletes to succeed in the classroom, in athletic competition, and in life.”

Vélez, who serves on the NCAA Division II Women’s Soccer Regional Advisory Committee, joined NYIT two years ago as associate director for intercollegiate athletics and chief of staff. In that role, he was responsible for the department’s day-to-day internal operations and business advancement and served as the sports administrator for men’s lacrosse, women’s lacrosse, men’s basketball, women’s soccer, volleyball, and baseball, as well as recreation and intramurals. He also acted as the department’s liaison for human resources, finance, accounts payable, and facility services.

Prior to joining NYIT, Vélez was the associate athletic director for operations at Siena College in Loudonville, N.Y. He was the sport administrator for field hockey, women’s swimming and diving, and men’s and women’s cross country. Additionally, he oversaw the financial and general reporting of Siena’s Department of Athletics and led Siena’s summer sports camps. He coordinated all team travel for Siena’s 22 NCAA Division I sports and served on the Metro Atlantic Athletic Conference Swimming and Diving Championship Committee, and contributed to developing and executing Phase 1 of Siena’s Alumni Recreation Center renovation.

Vélez also served as Seton Hall University’s assistant athletic director for facilities and operations, responsible for overseeing the daily operation of the Richie Regan Athletics and Recreation Center, which included managing the department’s work-study program. He has a B.S. in Education from Kutztown University and an M.S. in Sports Management from West Virginia University.

“I’d like our student-athletes to feel like they’re D-I student-athletes—that what we’re collectively doing matters and that they help to carry the NYIT banner everywhere they go,” said Foley. “Dan will be integral in helping to make this happen.”