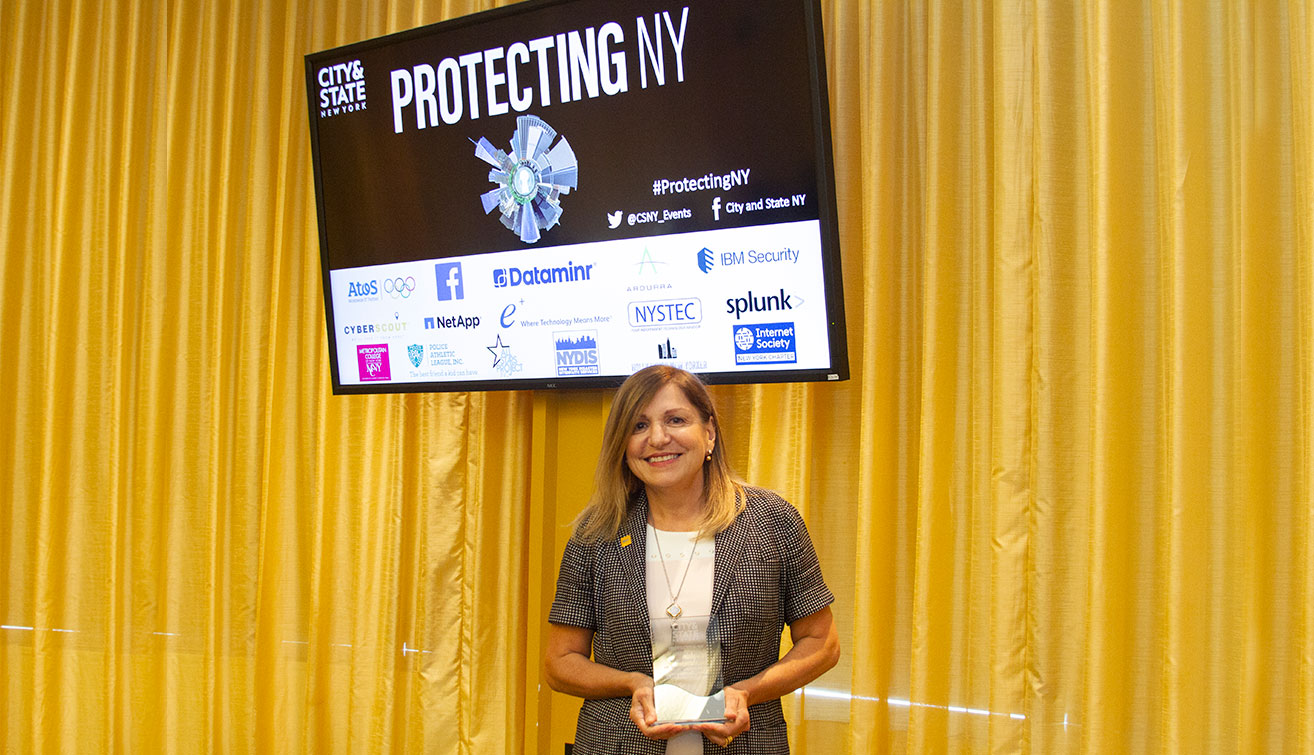 City & State New York, a leading media organization dedicated to covering New York’s local and state politics and policy, has recognized NYIT’s Nada Marie Anid, Ph.D., as one of New York’s most important thought leaders, innovators, and groundbreakers in the fields of cybersecurity and public safety and security, among others. On July 17, Editor-in-Chief Jon Lentz presented Anid with a “Protecting NY” award during City & State’s Protecting New York summit at Baruch College in New York City.

The Protecting New York summit convened industry executives, public sector leaders, and academics to discuss New York’s security strategy in sectors ranging from elections to community policing, as well as the tools the city needs to be recognized as a national leader in homeland security and emergency management.

In accepting her award, Anid initiated a call to action to those in attendance “to offer real-world scenarios and problems that we can use in our classrooms and community outreach programs. Whether it’s ethical hacking or cyber patriot games, kids love forensics and espionage and investigative intrigues. Let’s give them the right tools and inspire them. Let’s use pop culture and CSI and Mr. Robot and Girl with a Dragon Tattoo to make our field more exciting.”

Anid, who was appointed vice president for Strategic Communications and External Affairs in May 2018, was honored for her results-oriented leadership for the last nine years as the first female dean of NYIT School of Engineering and Computing Sciences. In this role, she spearheaded the creation of NYIT’s NSA/DHS National Center of Academic Excellence in Cyber Defense Education, its Entrepreneurship and Technology Innovation Center (ETIC), a certified business incubator, and the development of NYIT’s annual cybersecurity conference. Anid also oversaw an overhaul of the engineering school’s academic offerings and facilities in the critical areas of cybersecurity, bioengineering, and clean energy, and led efforts to forge strategic partnerships and community ties, increase enrollment, and produce a research output in excess of $10 million.

“I am proud to be in your company,” Anid told her fellow honorees, including Naomi Ryan, executive director, The John A. Reisenbach Foundation; Frederick J. Watts, executive director, Police Athletic League, Inc.; and Lenora B. Fulani, founder and director, Operation Conversation: Cops & Kids.