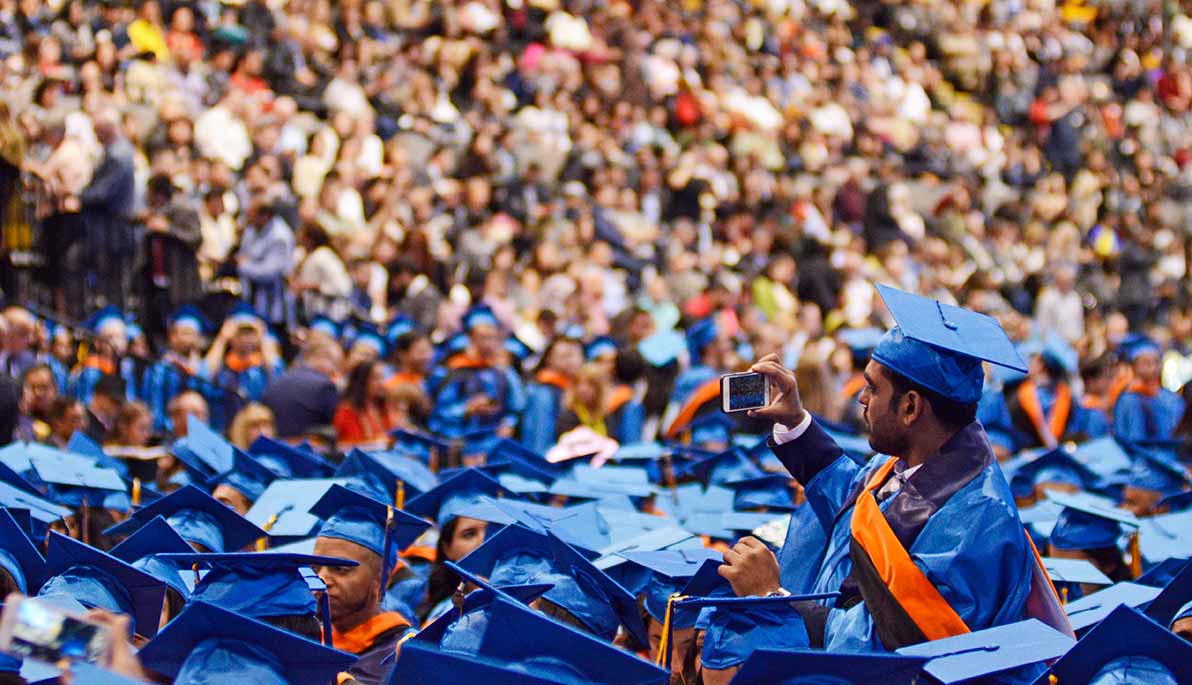 On May 22, 2018, 2,734 students from throughout the United States and 81 countries were saluted at NYIT’s 57th Commencement Ceremony, held for the first time at Nassau Veterans Memorial Coliseum in Uniondale, N.Y. More than 8,000 guests filled the arena to celebrate the newly minted graduates.

“I ask that you pledge to become the doers, thinkers, and innovators of tomorrow who also humanize what you do and as a result make this world better,” NYIT President Hank Foley, Ph.D., told the graduates. “NYIT’s future and your own future are entwined. You are NYIT’s legacy, and that legacy will grow even more with the successes of students like you who will follow in your footsteps. An institution’s success is simply the sum of our successes.”

President Foley also conferred an honorary degree upon NYIT alumna Carol Silva (B.F.A.), who delivered the keynote address. Silva, who was awarded a Doctor of Humane Letters, is the Emmy Award-winning anchor at News 12 Long Island.

In her keynote address, Silva urged the graduates to create and live their own stories, despite the challenges, rejection, and roadblocks they surely will face. She reminded them they have choices and to be the kindest version of themselves possible: “Look for the good in yourself, say the good out loud, and say the good out loud to the people around you.”

See the slideshow and read more below.

Jacob Miguel (D.O. ’18) helped kick off the festivities when he took to the stage and sang the national anthem. Later, graduate student speaker Krishan Wanarajan (M.S.’ 18), who is from Suva, Fiji, addressed his classmates and reminded them of one of the important lessons he learned at NYIT: “If NYIT taught me anything besides computer science, it’s that we need a lot of courage—the courage to fail, to fail hard, and fail often … Today, as we turn over our tassels and walk across this stage, we cross the finish line to start a new beginning and a new path in life—as alumni, as professionals, as grown-ups!”

The Class of 2018 undergraduate student address was given by Maylan Studart (B.F.A. ’18), from Ipanema, Brazil, who told her fellow graduates, “Whether you’re in the valley or at the peak, remember how much you’ve accomplished and that you can do it again and again.”

Studart was a jockey before an injury forced her to stop racing. “I wouldn’t be here today if it weren’t for the people who gave me a leg up, some of them literally, on the horses! I’m sure every one of you in the Class of 2018 has someone here today who is owed gratitude. Let’s honor them by paying forward every kindness given to us.”

In addition, NYIT College of Osteopathic Medicine’s hooding ceremony for Class of 2018 D.O.s took place during the morning of May 22. NYIT-Abu Dhabi held its 12th graduation ceremony on May 4 in the Dusit Thani Abu Dhabi Hotel, and the NYIT Vocational Independent Program held its commencement ceremony on May 17. NYIT-Vancouver’s graduation takes place June 1 at the TELUS World of Science.