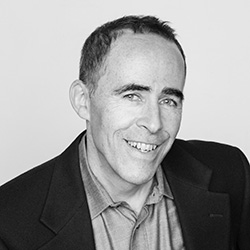 Robert Sherwin shares with his students a lifelong passion in filmmaking and photography. His interests range from urban landscape photography to dramatic and documentary film production. Sherwin likes to write, edit, and even occasionally shoot, but frequently collaborates with other professionals on larger projects. Although he started his career behind a desk at a Madison Avenue advertising agency in New York City, he quickly embraced still and moving imagery.

As a line producer for a film/video production company, Sherwin learned the necessary skills to work with actors, cinematographers, editors, and clients. In the evenings, he ventured out to photograph desolate areas of Manhattan’s West Side. He eventually took on his own clients and produced/directed video productions for Exxon/Mobil, Theater Guild, and Radio Advertising Bureau.

After completing graduate film school at NYU, Sherwin moved to Los Angeles, raised $1.5 million, and made his first feature film starring Academy-award nominated Tess Harper (Breaking Bad, No Country for Old Men). Premiering at the London Film Festival, this romantic comedy went on to a successful theatrical release in New York, Los Angeles, and around the world. Before joining New York Tech, he served as an adjunct professor at NYU and Hunter College.

Sherwin received his Master of Fine Arts in film making from NYU’s Tisch School of the Arts. As an undergraduate, he attended Cornell University and University of Vermont, graduating with a bachelor’s degree in business.