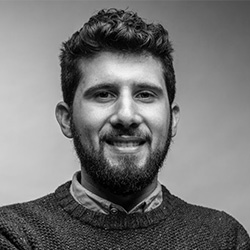 Michael Granatosky is an evolutionary biomechanist primarily interested in the origins of quadrupedal locomotion. He received his Ph.D. from Duke University and worked as a postdoctoral scholar at the University of Chicago. Granatosky has been collecting biomechanical data for 10+ years from over 75 tetrapod species, including tigers, red pandas, sloths, and crocodiles. He is considered one of the leading experts in the analysis of animal motion data.

Dr. Granatosky’s research explores locomotor biomechanics in a comparative evolutionary framework to address the overarching question: How to build a quadruped? Quadrupedal locomotion is a complex form of movement that requires animals to coordinate multiple oscillating anatomical and neurological components across space and time. The neural and musculoskeletal substrates for quadrupedal movement are ancient and represent the primitive condition on which all other tetrapod locomotor modes are based. As such, explorations of important evolutionary events such as the fin-to-limb transition, the advent of flight, or the origins of bipedalism must be based on a sound knowledge of quadrupedal gait mechanics.

With these considerations in mind, the question of “How to build a quadruped?” becomes a fascinating area of inquiry that requires a collaborative and interdisciplinary investigative approach. Current projects in his lab that address this broader research agenda include using “walking” fish and phylogenetic analyses of quadrupedal gaits to investigate neuromuscular evolution during the fin-to-limb transition, exploring the importance of proprioceptive sensory information in dictating performance during quadrupedal locomotion, and building bio-inspired robots to test evolutionary hypotheses about the origins of quadrupedal gaits.