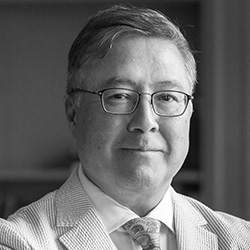 New York Institute of Technology Provost and Vice President for Academic Affairs Junius J. Gonzales, M.D., M.B.A., joined the university in June 2018 and leads its programs in teaching, research, and service. He is responsible for academic planning, new initiatives in teaching and learning, research and scholarship, faculty development, and student success initiatives (such as enhancing high-impact practices). His academic affairs portfolio also includes student development and engagement, career services, and student life, as well as extended education, institutional research and effectiveness, and program intelligence and improvement.

Immediately prior to joining New York Institute of Technology, Gonzales served in The University of North Carolina System as senior vice president for Academic Affairs (the chief academic officer for 16 universities and one high school with total enrollment of nearly 240,000 students) beginning in January 2015, as well as interim president from January-March 2016. As the UNC System's top academic officer, he was responsible for overseeing academic planning and budgeting, student affairs, sponsored programs and research, faculty development, licensure and institutional research, and data and analytics. For four years, he served as provost and vice president of academic affairs at the University of Texas at El Paso (UTEP)—one of the nation’s most recognized Hispanic Serving Institutions—where he championed student success and led the institution to receive several national awards (Institute for Higher Education Policy’s Champion for Access and Success, the Starfish 360 Award, and the New Media Consortium 2015 Center of Excellence Award). Gonzales also was the principal investigator for a U.S. Department of Education $2.62 million grant for student retention, while significantly expanding online education.

He was the founding dean of the College of Behavioral & Community Sciences and executive director of the Louis de la Parte Florida Mental Health Institute at the University of South Florida (USF). Before that, Gonzales brought more than 30 years of expertise in the strategy, execution, and program/policy development of academic and research endeavors, collaborations with universities, industry, non-profits and government entities, and a leadership record in scientific portfolio management and higher education. His deep and broad experiences were cultivated in different settings: academia (Georgetown University, USF, UTEP), the federal government (National Institutes of Health), and the private, for-profit sector (Abt Associates).

Gonzales has performed extensive national service in the public sector starting with his selection to be on the current National Academies of Sciences, Engineering, and Medicine’s 21-member workgroup on Systemic Change for Undergraduate STEM Education. He was also appointed to two National Advisory Councils for two federal agencies: the Agency for Health Care Research and Quality and the Substance Abuse and Mental Health Services Administration from 2014 to 2017. Other significant recent national appointments include the Executive Committee of the Council on Academic Affairs for the Association of Public and Land-Grant Universities (APLU) and Harvard’s COACHE National Advisory Committee. He completed two three-year terms on the editorial board of the prestigious journal Health Services Research, regularly served on NIH Research Center review panels (CTSA, RCMI, COBRE), and recently reviewed for the National Science Foundation.

As a health services investigator, Gonzales received significant research funding totaling more than $15 million in lead roles such as PI or co-PI from federal agencies such as NIH, CDC, SAMHSA, AHRQ, STPI, DoEd, and private funders such as the Doris Duke Charitable Foundation. His last large research grant of $1.24 million for three years from the CDC was to adapt an evidence-based intervention for Latinos with chronic medical diseases and depression.

As a first-generation college student and first-generation American of poor immigrant parents, he is committed to equality of opportunity through education. He also tries to give back by serving on boards of non-profit organizations such as RTI Inc. (a research and consulting firm), services groups such as the United Way, El Futuro, and Neighbors Consejo, and arts organizations such as the Tampa Museum and the Signature Theatre.