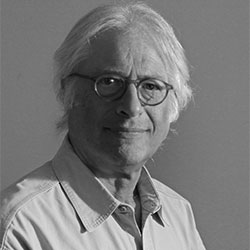 Jody Saslow's experience in the film and television industry includes seven years as the film editor for the Candid Camera television series and specials for CBS and HBO, staff cinematographer and film editor with the ARD West German Television New York Bureau, and assistant film editor on the Universal Pictures-Zanuck/Brown feature The Island. He has worked as a cinematographer, film editor, and sound recordist on documentary, industrial, and commercial films for clients including Levi Strauss, the City of New York, the U.S. Postal Service, the Long Island Rail Road, the David M. Winfield Foundation, American Movie Classics, and independent filmmakers. Films directed by Saslow have been screened at the Mannheim and Melbourne International Film Festivals, the Robert Flaherty Film Seminar, the New York Museum of Modern Art, the Polish Television Network, the Vienna Filmhaus, and Showtime Entertainment. His film, Crosby Street, is in the permanent collection of New York City's Donnell Media Center, where it has been restored with a recent film preservation grant. Saslow's stock cinematography is represented by Third Millennium Films in New York City. His still photography has been exhibited at the Schenectady Museum of Art, the New Rochelle Public Library, and NYIT. He has served on festival juries for the Association of Visual Communicators Cindy Awards, the International Film and Television Festival, and the Long Island Media Arts Show.