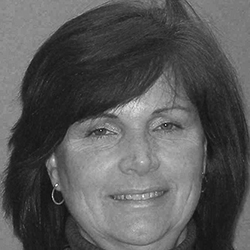 Julie Price teaches courses in public relations, advertising, and media law. She has been a public relations professional for over 20 years, working with corporations and not-for-profit organizations.

After earning her bachelor of science degree in communication arts at St. John’s University, Price began her corporate career at Long Island radio station WLIR. She worked as news assistant, reporter, and production assistant, and then became the public relations/promotions director just as the station switched to a “new music format.”  The success of WLIR’s award-winning new music programming led to the launch of WLIR’s sister station in the Pittsburgh area. During this time, Price held the position of public relations/promotions director at radio station WLIR, New York and vice president programming/promotions at sister station WXXP, Pittsburgh. She coordinated music and listener research to customize the “new music” format to the Pittsburgh market. Price was responsible for coordinating all public relations, marketing, and advertising efforts to promote both WLIR, New York and WXXP, Pittsburgh.

While earning her master’s degree in communication arts from New York Tech, Julie worked as a public relations/ promotions consultant for clients such as Miller beer, MTV, and Pittsburgh Brewing Company.

More recently she has focused her public relations efforts with Long Island not-for-profit organizations such as the National Association of Mother’s Centers and Drug Free Massapequa/Drug Free Long Island among others.

Along with her teaching, Julie has been working on her Ph.D. in Information Studies at LIU Post. Her research interests include the effective use of social media for disaster relief. She is currently examining social media use during Superstorm Sandy.