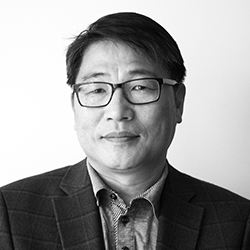 Hyun-Tae Jung is an associate professor of Architecture at New York Institute of Technology. He completed his bachelor's and master's degrees in architecture at the University of Seoul, South Korea. Jung received a doctorate in History and Theory of Architecture from Columbia University. His dissertation, "Organization and Abstraction: The Architecture of SOM from 1936 to 1956," deals with the rise of corporate architecture in the mid-twentieth century.

Jung has worked on theories of architecture, urbanism, sociology, and globalization as well as architectural design, and has published numerous articles in American and foreign journals. He has taught at a range of institutions, including Louisiana State University, Lehigh University, the University of Nebraska-Lincoln, Columbia University, Parsons School of Design (The New School), and The Seoul National University of Technology.

Among several research and teaching awards received throughout his career, Jung won university-wide teaching awards from the University of Nebraska-Lincoln (College Award for Distinguished Teaching) and Lehigh University (Donald B. and Dorothy L. Stabler Award for Excellence in Teaching).