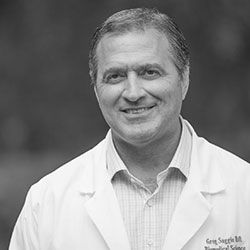 Sagio completed a one-year rotating internship at Lutheran Medical Center in Brooklyn, N.Y., in 1995. He completed a residency in general surgery at University of Medicine and Dentistry of New Jersey School of Osteopathic Medicine in 1999 and served as chief surgery resident. Saggio spent one year after finishing his residency in private practice at Shore Memorial Hospital in Sommers Point, N.J., doing general and vascular surgery. He subsequently took a faculty position as an assistant professor of surgery with department of surgery at UMDNJ-SOM focusing on general surgery. Saggio returned to private practice as a general surgeon for six more years in Cherry Hill, N.J. He was on staff at Kennedy Memorial Center in Stratford, NJ as well as the Virtua Health system in Cherry Hill, NJ.

He has been part of NYITCOM since 2005, joining the medical school full time in 2016. He spent three years in the Department of Osteopathic Manipulative Medicine, three years in the Department of Biomedical Science, and is now in the Department of Clinical Specialties. At NYITCOM, Saggio serves or served on many committees including the Student Progress Committee, the Task Force for Curriculum Revision, Academic Faculty senate (past President), Chair of the Academic Senate Grievance Committee. He is the Director of the Cardiopulmonary-Renal system course. He is heavily involved in the problem Based Learning curriculum.